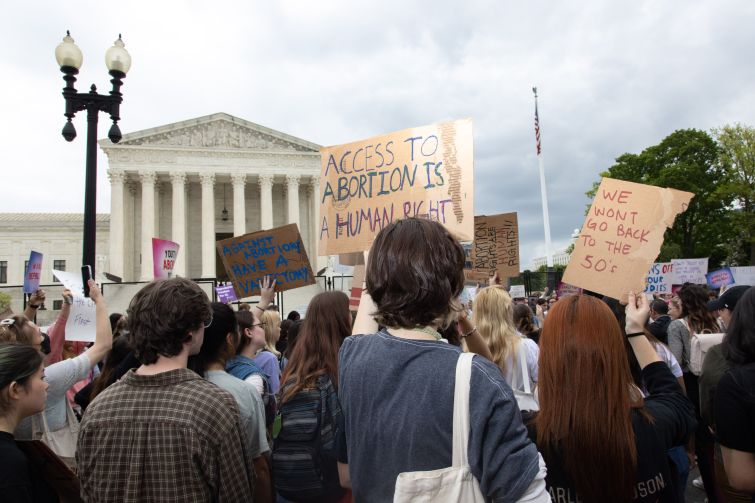 The moment you finish reading this newsletter you should run to Stop & Shop and pick up dogs, burgers, mustard, relish and whatever other necessary accouterments are missing from your larder because, in case you forgot, tomorrow is Memorial Day.

Unfortunately, it feels that political confrontation is not going to be avoidable at this year’s barbecue. Beyond the wrenching shootings in Buffalo, N.Y., and Uvalde, Texas, Americans are still reeling from the leaked Supreme Court draft of an opinion overturning Roe v. Wade. Those in real estate who think they can remain on the sidelines quietly consuming frankfurters are probably fooling themselves.

In a labor market where employers are having serious problems with talent attraction and retention, site selection is going to matter to businesses much more than previously. And that means local, state and federal issues matter to real estate professionals as never before.

“Basically, nobody wants to touch it, but everybody has to,” Alison Taylor, executive director of ethical systems at New York University’s Stern School of Business, told Commercial Observer about the expected post-Roe v. Wade environs. Internal debates are already rife in companies, even if they haven’t broken into the media yet.

“There’s a concern from states in the Sun Belt that have been so successful that you can’t take the economic development success for granted,” said John Boyd, principal of The Boyd Company, a national site-selection firm. “There’s legitimate concerns that this could eliminate a Texas city or put a rival location over the top.”

Some might disagree. There are plenty of people in real estate who see a good site as still a good site, no matter the politics of the state, or who or what is involved.

For example, some might have thought that the reputation of Florida developer David Martin of Terra – which was building the condominium next door to Champlain Towers South when it collapsed last year, killing 98 people – might have suffered when blame for the collapse was partly laid at Terra’s feet. (Terra denies any wrongdoing, but it nevertheless agreed to participate in a $1 billion settlement with the Champlain Towers survivors.)

Actually, not so much. Martin remains one of the most prominent and sought-after developers in South Florida. Terra just landed a $141 million loan to build a 1.8-acre mixed-use development in Bay Harbor Islands; it unveiled plans for a 709-unit project called Upland Park; and next year it’s opening the 402-unit Grove Central.

CO reached out to dozens of real estate professionals for our article about Martin, and all declined to comment on the record because, as one publicist put it, “They may want to do deals with Terra in the future.”

Heck, a lot of people in real estate don’t believe there will be any lingering doubts about the Champlain Towers site itself. Dubai-based developer Damac Properties paid $120 million for the 1.9-acre lot last week.

But whether developers or sites are politically or socially radioactive, Florida state representatives appear to be taking issues of safety seriously. Last week they unanimously passed legislation calling for more frequent safety inspections, and requiring condo boards to hold more cash in reserve for needed repairs. (It still needs the governor’s signature before it becomes law.)

And it’s not like the pace of Florida development is slackening. Just this week Related Companies’ Stephen Ross announced he’s buying the Deauville Beach Resort in Miami Beach (from where the Beatles made their second “Ed Sullivan Show” appearance in 1964) and enlisted the services of starchitect Frank Gehry to be in charge of the redesign.

Plus, Two Roads Development plunked down $150 million to buy out residents at Biscayne 21, a 191-unit condo at 2121 N. Bayshore Drive facing Biscayne Bay, which the company plans to turn into an “ultra-luxury” residential development.

Back to normal? (Sort of)

For the first time since the pandemic hit we heard the acronym “ICSC” with the words “Are you going?”

Yes, ICSC was back! (Although instead of the International Council of Shopping Centers, it’s now officially called … Innovating Commerce Serving Communities? Uh, OK.) And CO was on the ground.

CO co-hosted an event at Area 15, Fisher Bros.’ gargantuan, 120,000-square-foot “immersive bazaar” as its owners call it, which showcased the retail center’s offerings such as the “House of Eternal Return” (described as a “multidimensional mystery house”); virtual golf; ax-throwing; food and beverage; and a “2,000-square-foot bamboo volcano.” (You might have to go to Vegas to get the full rundown on that one. But there are some sweet photos from the party in this slideshow.)

And it was good to be back in the Vegas ICSC swing of things. There were the normal booths and breakfasts. There was a lot to discuss: convergence of retail and work, for instance. ESG and retail was on the minds of many. And there was even some optimism in the air about the state of retail.

Of course, retail remains a raw topic for a lot of people. There are still a lot of malls that are flailing. Even the biggest of the big retail owners no longer offer unthinking, sunny bromides. Earlier this month, CO spoke to Ronald Dickerman, head of Madison International Realty, who made headlines a few years ago with his purchase of Forest City’s retail portfolio. While he was still bullish on the right kind of retail, he was a little more measured about retail in general.

“We’ve been investing not so much in New York but in new asset classes in the United States and Europe,” Dickerman told CO.

Madison’s not alone in staying level-headed and realistic. Vornado, one of the largest retail owners in the country, finally cut the cord on its Lincoln Center mall on Miami Beach’s Lincoln Road for $35 million less than it paid for the property back in 2012, after defaulting on an $83 million loan there last year.

It should be noted that retail leases are happening in New York!

For instance, Capital Grille is taking a whopping 15,000 square feet for a new steakhouse to be opened in 2023 at 200 Park Avenue. Black Seed Bagels and Jack’s Stir Brew Coffee also announced leases at the building above Grand Central Terminal owned by Tishman Speyer and Irvine Company.

Open Squash, the city’s only public nonprofit squash club, is taking 21,432 square feet at 100 Pearl Street in the Financial District.

And the money men and women still see a future for the right offerings: Midtown Equities, Centaur Properties and Cipriani S.A. landed a $100 million refinance for Casa Cipriani, a luxury hotel and members club in Lower Manhattan. Plus, Maverick Real Estate Partners sees safety in the $110 million note that the Chetrit family has on its planned 323-key hotel at 255 West 34th Street, which it picked up (at a “slight discount”) from Arbor Commercial Mortgage.

But New York isn’t only retail. There were office leases as well; Berkeley Research Group renewed its lease at SL Green Realty’s 810 Seventh Avenue. (It was a pretty good week for SL Green; the REIT won a $185 million arbitration from HNA Group over the management of 245 Park Avenue.) Nonprofit research outlet Consumer Reports took an 8,189-square-foot lease at the Durst Organization’s 675 Third Avenue. And the Connecticut-based investment firm Eldridge took 37,150 square feet at the GM Building.

You know who’s having a good Memorial Day? Adam Neumann.

This week we learned that the WeWork founder and his partners made a $70 million profit on the sale of a 662-unit multifamily development in Norwalk, Conn., that they bought for $226 million two years ago.