Shoppers Are Back – JLL Releases New Retail Report at ICSC 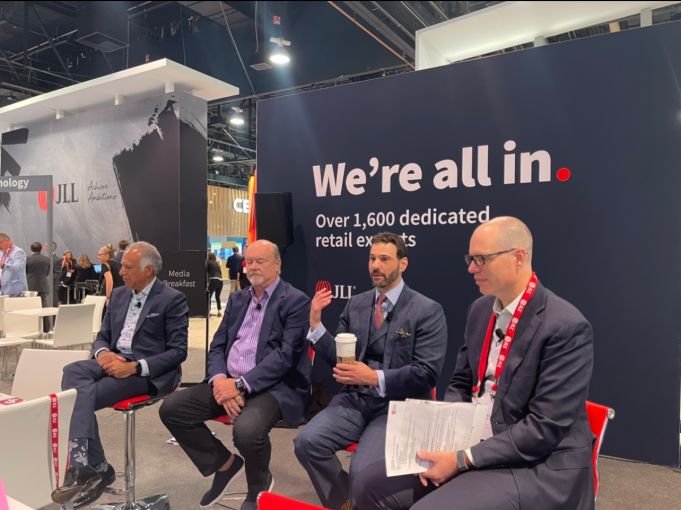 How far along is the urban retail recovery?

This question is top of mind at this year’s Innovating Commerce Serving Communities (ICSC) retail event in Las Vegas. JLL gave its version of the answer by releasing a new urban retail recovery report at the event mapping out the path ahead for retail real estate. The brokerage also led a panel focused on the topic. Moderated by James Cook, JLL’s Americas director of retail research, speakers included Naveen Jaggi, president of retail advisory services at JLL, Greg Maloney, president and CEO of retail property management at JLL and Ryan Severino, JLL’s chief economist.

For urban retail to recover, JLL believes the industry needs a full return of both office workers and tourists to American cities.

“Until we see Asia and Europe traveling back to the U.S., we’re not going to see that urban recovery as we saw back in 2010 and 2018,” Jaggi said at the panel.

More workers are heading into the office, but not at pre-pandemic rates. According to the urban retail report, New York City office rebound is still lagging compared to Kastle System‘s 10-city average, but has seen the biggest increase from the start of 2022. In January, office occupancy was at 18.1 percent,but it has now increased to almost 40 percent. In response, leasing activity is picking up, with new deals signed in Midtown, including Alo Yoga and Din Tai Fung.

“Most people do not want to work alone at their kitchen table for the next 30 years,” Severino said. “We just need to get through some of these idiosyncratic disruptions like new virus variants or higher energy prices.”

As for tourism, U.S. markets that rely heavily on it have struggled. According to JLL analysis of Placer.ai data, foot traffic from domestic tourists is up 14 percent in New York City from 2019, and while San Francisco is still below 2019 levels, foot traffic to Union Square has doubled over the past year.

“Luxury and fast fashion are the two categories that you will see tourism buy more than the other,” Jaggi noted. He believes that luxury brands will focus on the U.S. market in the coming years because it’s more predictable than the Asia market.

“If I’m watching any sectors and paying attention to how they grow in the next few years. I’m watching luxury because to me, that’s my big bet for the near future,” he said.

The report also found that the return of casual sit-down dining is happening across all major urban markets, with new restaurants opening as demand for them increasing. According to Morning Consult, Americans’ comfort with dining out sits at 75 percent as of April 30, 14 points higher than it was at the start of the year. Dining outdoors has hit a new high, with 82 percent of people feeling comfortable.