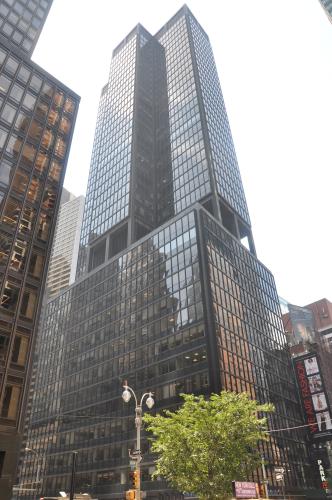 Berkeley Research Group has signed on to another five years at SL Green Realty’s  810 Seventh Avenue, according to a source with knowledge of the deal.

The consulting firm, which specializes in a range of industries, will remain in its current 34,640-square-foot footprint on the entire 40th and 41st floors of the 41-story building, the source said. Asking rent was between $85 to $95 per square foot.

“We’re delighted to extend our relationship with Berkeley Research Group, who previously expanded from an initial occupancy of 15,000 square feet to 34,000 square feet,” Steven Durels, director of leasing at SL Green, said in a statement.

SL Green was just one of many commercial landlords that took a major hit during the first year of the pandemic, but it was able to attract tenants such as law firm Ballon Stoll Bader & Nadler to 810 Seventh in January 2021, which relocated to the Midtown Class A office building after being offered 12 months of free rent.

Since then, SL Green has seen a renewed wave of leasing, including the Canada-based waste manager GFL Environmental, which signed up for 9,871 square feet on the top floor of 1 Vanderbilt in April, and tech giant IBM signing on to be the anchor tenant at 1 Madison Avenue in March.