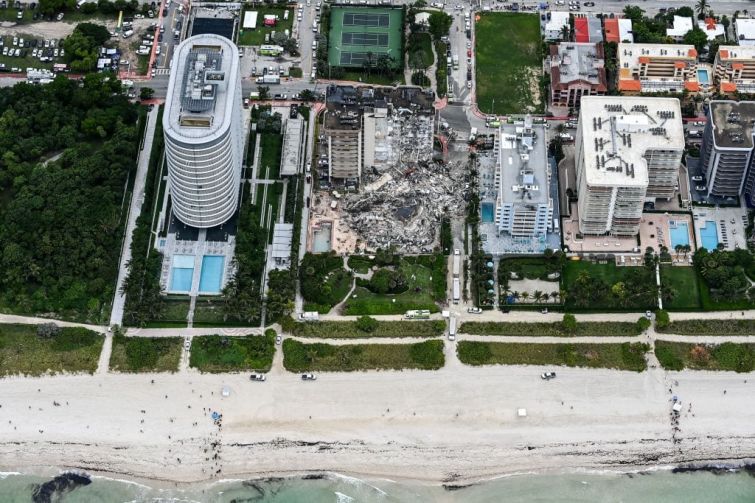 Site of the collapsed condo soon after the tragedy. Photo: CHANDAN KHANNA/AFP via Getty Images

The site of the deadly collapse of the Champlain Towers South condominium in Surfside, Fla. will be sold to the stalking-horse bidder for $120 million, after no new bidders came forward ahead of a Friday deadline.

The buyer is Dubai-based developer, Damac Properties. It made the offer back in August and has since had access to the 1.9-acre site to perform tests as part of its due diligence.

The deal comes less than a year after the collapse last June and just over a week after another milestone in the case — an almost $1 billion settlement for the injured survivors and family members of the 98 victims.

The proceeds of the land sale will go towards compensating the victims who lost property and the family members of the deceased.

An auction was scheduled for this coming Tuesday. Avison Young’s Michael Fay, the broker leading the sale, said that other developers had expressed interest. But no competing came in by the deadline Friday, effectively canceling the auction.

The oceanfront parcel sits in a prime spot, along the Surfside boardwalk and just north of Miami Beach at 8777 Collins Avenue. Damac, led by Hussain Sajwani, will most likely build a luxury condominium, a growing trend among developers looking to cash in on Miami’s red-hot residential market.

The sale has come under fire from some family members, who proposed a land swap. They suggested that the nearby Surfside Community Center be sold instead, while the Champlain site would house a memorial.

The land on which the Champlain building stood is a “burial site for us,” Carlos Wainberg, who lost family members in the collapse, said in a court hearing last September. “To see a high-end development built would be very hard for all of us.”

But Surfside town officials and Miami-Dade Circuit Court Judge Michael Hanzman, who’s presiding over the case, shot down the proposal. Hanzman has been clear from the outset that he wished to see the land sold promptly, so the victims could be compensated.