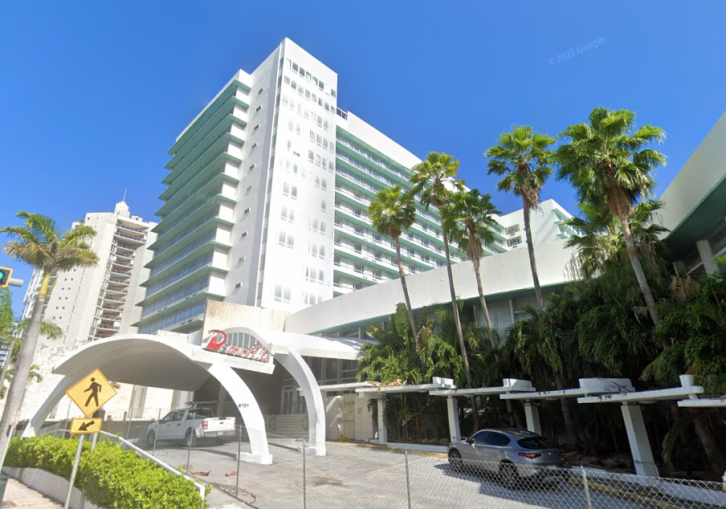 The hotel, originally built in 1957, was the set of the famed Beatles performance for “The Ed Sullivan Show” in 1964. It’s said to have hosted President John F. Kennedy and Frank Sinatra.

The MiMo-style hotel has remained vacant following an electrical fire in 2017. The property fell into such disrepair that a Miami Beach official issued a demolition order in January, deeming the building structurally unsafe. A last-ditch effort to save the property, launched by the Miami Design Preservation League, failed last week when a Miami-Dade County board upheld the order.

The oceanfront property sits on 3.8 acres at 6701 Collins Avenue in North Beach, a historically working-class neighborhood that’s been gentrifying, thanks to Miami Beach’s soaring residential market during the past two years.

Ross has not revealed specific plans for the site, only divulging his intention to develop a “six-star hotel and luxury residences” designed by Gehry. The Pritzker-winning architect has designed iconic structures such as the Guggenheim Museum in Bilbao, Spain.

The Deauville project is “personal” for Ross, who partly grew up in Miami Beach and graduated from Miami Beach Senior High School.

“I know what this site means to the people of Miami Beach, and I know the potential to create a truly special development that honors the history of the Deauville while creating an iconic place for generations to come,” Ross said in a statement.

The Meruelo family bought the 540-room hotel for a mere $4 million in 2004, according to property records. After the 2017 fire, the property had been embroiled in a legal fight. In 2019, the Miami Beach government sued the Meruelos to maintain the 595,788-square-foot resort, as required for historically protected buildings. Some preservationists have accused the owners of letting the hotel decay on purpose, in hopes of tearing it down and building something new.

Miami Beach Mayor Dan Gelber said he would back a development project with Ross at the helm only because of Ross’ long-term vision.

“There are too many examples of folks buying and flipping parcels for quick payoffs, leaving the city with undeveloped and vacant properties for too many years,” the mayor wrote in an email to residents. “Steve is committed to making sure his design pays suitable homage to the original Deauville and wants to assure the entire neighborhood benefits.”

The developer is “not looking to increase density but needs more flexibility in the design possibilities,” Mayor Gelber added. It’s unclear whether Ross will retain parts of the original structure or move forward with a complete demolition.

Miami Beach residents will likely have a say. Mayor Gelber said he would ask the City Commission to put the development plans to a vote this November.

A number of questions remain unanswered, including whether Ross’ purchase has even closed. A representative for Related did not respond to a request for comment.

While the developer announced that he had bought the property — without providing a sale price — Mayor Gelber wrote that Ross had taken “the first steps to purchase the property” only last Friday by signing “documents that will allow him to acquire and control the parcel.”

It’s also unclear whether the project will be owned by Ross personally or his development firm, Related Companies, a powerhouse in New York’s real estate scene having built Hudson Yards and the Deutsche Bank Center, formerly known as the Time Warner Center.

Ross, who’s worth an estimated $8.2 billion, has a history of working outside of the firm he founded. After buying the Miami Dolphins in 2009, he renovated the Hard Rock Stadium, spending hundreds of millions out of pocket.

For Ross, the Deauville development represents another milestone in his growing South Florida real estate empire. Related Companies is in the early stages of developing an office tower in Brickell, one that could become Miami’s tallest. In West Palm Beach, Related has developed much of the city’s downtown, including a neighborhood-like shopping mall and an office building that nabbed Goldman Sachs as a tenant.