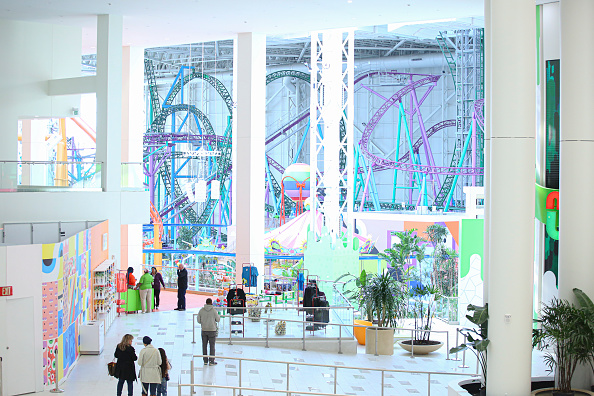 The recent troubles of the American Dream mall in New Jersey — including an annual loss of nearly $60 million — highlighted the challenges that malls face. Photo: KENA BETANCUR/AFP via Getty Images

Retail sales are up as consumers are flush with cash, and spending on goods surged during the pandemic. Mall owners, however, have had volatile returns over the past two years as some regional malls struggle to attract customers and drive foot traffic as anchor stores close. For example, the 3.5 million-square-foot American Dream mall in Rutherford, N.J., recently reported that it lost nearly $60 million last year.

Although the problems are similar, the solutions vary widely, from converting portions of properties to residential or office uses to razing centers and replacing them with distribution facilities.

“Malls are the only retail segment really lagging, but the best malls are doing well,” said Brandon Isner, CBRE’s head of retail thought leadership. “It’s been a tougher road for malls to adapt to omnichannel retail.”

Big-box store closures have plagued properties where foot traffic was historically key to success, and retailers frequently owned those sites separately from other portions of the property. Some malls have successfully converted portions to office space. Others have considered adding residential housing. However, the solutions are challenging and could ultimately lead to closures.

This is not to say that major mall operators haven’t tried to deal with the impacts of changing behavior and demographics, and sometimes been rewarded for their pivots.  Simon Property Group, a major mall REIT, raised its quarterly dividend and increased full-year 2022 guidance after reporting first-quarter earnings this month amid accelerated leasing momentum and sales. That built upon 2021 results when the company generated nearly $4.5 billion in funds from operation, an all-time high. Net income attributable to common shareholders was $2.2 billion, up from $1.1 billion in 2020 and above 2019’s $2.1 billion.

Yet the company defaulted on several loans over the past two years and turned control of several properties saddled with millions of dollars of losses over to creditors. For example, the 1.2 million-square-foot Southridge Mall in Greendale, Wis., is set for auction following its foreclosure agreement with lender JPMorgan Chase filed in Milwaukee County Circuit Court in April. The mall was once anchored by five big-box retailers: Sears, Kohl’s, Boston Store, Macy’s and JCPenney. Only two of those stores remain open. Simon announced that it intended to default on the CMBS loan for the property in 2020 and finalized a foreclosure agreement with the lender in April 2022. There is $121.3 million owed, but an appraisal from last August valued it at $70 million.

“Owners and special servicers have options,” said Steve Jellinek, vice president and head of research at DBRS Morningstar. “Large REITs might walk away if it’s not hitting a target rate of return. They just want to walk and let someone else try to stimulate revenue.”

Paris-based mall owner Unibail-Rodamco-Westfield announced in April its plan to sell off its 29 U.S. properties by the end of 2023 and expects to take losses on its initial $14 billion investment four years ago. However, it has also disclosed plans to allow default on four properties securitized by CMBS loans, including shopping centers in Palm Desert, Calif., and three Florida properties. The Palm Desert mall entered receivership in November managed by JLL and remains open but was rebranded without the Westfield name. The mall was originally appraised at $212 million in 2015 when its CMBS loan was issued, but the appraised value declined by 74 percent to $55.2 million as of July 2021.

Overall, however, shopping behavior appears to have been minimally impacted by the pandemic as shoppers have returned to malls. According to Placer.ai’s mall index, visits to indoor malls in April were down 0.3 percent compared to the same month in 2019, while open-air and outlet centers saw declines of 4.4 percent and 4.5 percent, respectively.

Conversely, some properties such as Dolphin Mall in Sweetwater, Fla., had 2021 net rentable income surpass pre-pandemic levels. The 1.4 million-square-foot regional mall owned by Taubman Realty Group secured a
$1 billion loan with an appraised value of $1.67 billion on May 16.

Commercial Observer identified dozens of malls across the country where appraised values declined more than 50 percent, however. These are the malls with the steepest declines.

Summary: The Charlottesville Fashion Square mall had the highest decline in appraised value of all CMBS-securitized regional malls in the country. It declined by 91 percent from $83.9 million in 2014 to $7.5 million as of August 2020, which coincided with a decline in occupancy from more than 90 percent down to 59 percent as of December 2019.

Owner Washington Prime Group struggled during the pandemic and filed for bankruptcy protection in 2021. The loan was originated in 2014 by JPMorgan Chase and transferred to special servicing in October 2019 following the closure of the collateral Sears in March 2019. Charlottesville Fashion Square sold in 2021 for $20.2 million to the mall’s lender during a foreclosure auction on the steps of the local courthouse.

Summary: The mall entered receivership in fall 2020 after its owner, Great Neck, N.Y.-based Namdar Realty Group, defaulted on mortgage debt owed to Wells Fargo. The mall was plagued by declining sales due to COVID. An auction scheduled for October 2021 was postponed until later in 2022. Tenant anchors Macy’s and JCPenney remain open, but the Sears site closed and is owned separately from the mall.

Summary: The mall, about 100 miles northeast of Pittsburgh, went into foreclosure in 2019 as occupancy decreased to 72 percent. Sears was the largest tenant at the mall and closed a 63,000-square-foot store. It then went to auction, and the only bid came from JLL for $29.3 million. The commercial real estate firm has since leased and operated the mall, which has seen additional reductions in value.

Summary: At securitization, the collateral was valued at $69.4 million, but the value has fallen to $10.5 million. Sears closed its location at the mall in 2018, and Virginia College, which once occupied a 6-acre portion, also vacated. Mall owner Brookfield Property Partners agreed to hand over the mall to its lender as it shed several retail properties in 2021.