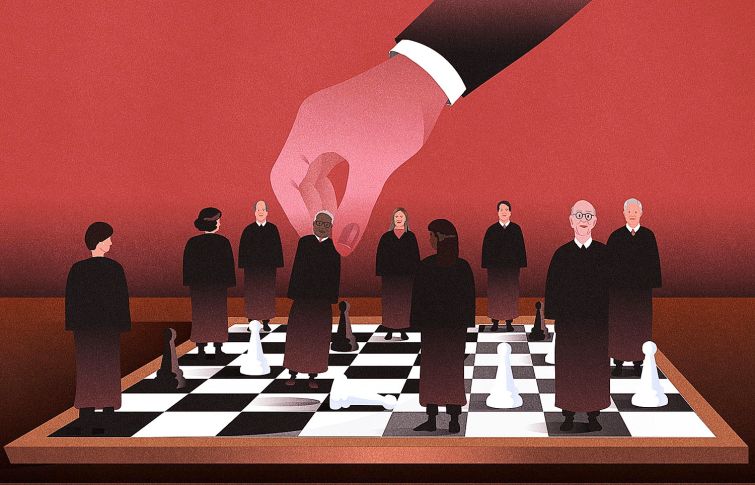 Companies saw this case looming like a “hurricane swirling off the coast.” So the bombshell report in early May that the U.S. Supreme Court intended to use Dobbs v. Jackson Women’s Health Organization to in effect overturn the judicial precedent protecting abortion nationwide reverberated quickly across corporate America, according to Jen Stark, the incoming co-director of the Center for Business and Social Justice.

The uncompromising language in a leaked draft decision in the case underscored the urgency of the issue, and its potential to change how companies think about talent attraction and retention, human resources and health care policies, and the increasingly tricky job of site selection and locating offices across the country.

“Basically, nobody wants to touch it, but everybody has to,” said Alison Taylor, executive director of Ethical Systems at New York University’s Stern School of Business, about the expected post-Roe v. Wade future arriving this summer. While many companies have remained silent in light of the draft decision, most are already in frenzied debate about what to do next.

Site selection — an increasingly politicized, often fraught process, with corporations weighing talent recruitment, the potential wrath of local leaders, and the message they’re sending to consumers — has become even more complicated. The draft decision overturning Roe v. Wade has certainly upped the stakes for companies, since the existence of trigger laws and increasingly more restrictive abortion laws would immediately outlaw the practice in at least 13 states, threatening in particular one of the last decade’s economic development success stories, the so-called Texas Miracle.

“Between developers and major real estate brokers in Texas, nobody’s excited about abortion becoming illegal,” said John Boyd, principal of The Boyd Company, a national site-selection firm. “There’s a concern from states in the Sun Belt that have been so successful that you can’t take the economic development success for granted. There’s legitimate concerns that this could eliminate a Texas city or put a rival location over the top.”

Not all companies, and not all facilities and locations, will look past the bottom line and give a second thought to fraught social and political issues. But with such a tight labor market, and fierce competition for talent, especially diverse talent, many firms will need to grapple with how new legislation and court precedents affect their operations.

“Companies no longer view headquarters relocations as shuffling people and real estate. They’re part of a company’s brand, and a pivot point in their history,” Boyd said.

The site-selection process for companies has already seen radical shifts in recent years, according to Wayne Gearey, chief labor economist for Savills. Labor issues — finding a site with the right cultural, social and, yes, political fit for the workforce — has become the driving concern in recent years. Deep data analytics go into making these decisions, including reams of demographic and financial information, psychographic segmentation, even scraping LinkedIn to see if local labor pools have sufficient skills and specialties. Analyses look down to the neighborhood level; it’s not about red and blue states, Gearey said, but a much more granular look at red and blue markets.

The Amazon HQ2 contest five years ago — which pitted municipalities and their incentive packages against each other, and showcased the data-heavy aspects of this kind of site search — also brought these issues to a wider audience. So did a recent run of electric vehicle and battery plants, including the Tesla Gigafactory in Sparks, Nev., and the FoxConn disaster in Wisconsin, where a $4.1 billion subsidy package for a cutting-edge electronics factory resulted in no new manufacturing plant.

Candidates from both political parties run on policies they argue will improve the business climate and create jobs. But Republicans in particular have enacted a number of economic policies and social legislation around hot-button issues, moves that the 24-hour news cycle and social media have amplified, and that have led to business losses and relocation. These include North Carolina’s Transgender Bathroom Ban Bill (which cost the state an estimated $3.76 billion in lost business, including the loss of a new office for real estate data firm CoStar); Indiana’s Religious Freedom Bill (which cost Indianapolis millions in convention business); and Major League Baseball pulling out of hosting the All-Star Game in Atlanta over Geogia’s restrictive voting laws.

“Companies are only as good as their people, and this is a time of historic mobility, especially in the tech industry,” Boyd said. “Companies are conscious of not just brand implications of being in a state that’s criticized for banning abortion. It creates HR challenges in an already tight labor market.”

Boyd suggests that booming cities like Phoenix and Nashville may suffer from restrictive laws and social legislation.

“The site selection is a science and an art,” Boyd said. “There’s the measurement of taxes and business costs. It’s the qualitative part of the process, which looks into lifestyle issues, the attitude of HR leaders — that’s the art.

The impact this will have on retaining and attracting female talent will be significant, said Stark. Her recent article on the business impact of Roe’s downfall cites research by Morning Consult that shows by a 2-to-1 margin employed adults would prefer to live in a state where abortion is legal and accessible, and 70 percent of consumers believe it’s important for companies to take a stand on social issues. Also, a new study found existing abortion restrictions already cause $105 billion in economic losses annually, including lost wages and retention.

“What we’re fielding at a national level is business not minding extreme public policy in the state for many years on this issue,” Stark said. “Why haven’t we seen a similar response today, like we did to the 2016 North Carolina bathroom bill, to an issue that affects the health care of half the workplace? Because there’s a larger issue where we don’t fully monetize the impact of barriers to women being fully productive in the workplace, like child care. This is another issue where we don’t fully value women’s time and labor.”

Analysts believe companies, especially those in service, tech, finance and design, will definitely provide employee health benefits to maintain access to abortions. Taylor of the Stern school says she believes this may be another reason to grant more remote work privileges to workers, and will push firms to have internal debates on these issues. Companies with operations in states with trigger laws may be offered access to these policies so their health care will be protected.

“Because of multiple extreme public policy measures, companies already have a playbook, if you will, for mitigating the harm of extreme social policy in the states,” Stark said. “Now it’s an opportunity to expand that to include abortion.”

Companies are now “beyond the performative” reactions to this issue, she said, and should take effective steps, such as minding where they host events and conferences, or locate future operations based on a state’s social policy climate. This draft of the Dobbs v. Jackson decison has raised alarms among many that the current Supreme Court may go after other court-affirmed rights, making this a true Cassandra moment for women’s rights supporters and abortion rights advocates.

“There’s now going to become a trade-off between favorable tax regimes and health care and hassle, and the cost of having to deal with this issue,” Taylor said. “I don’t see how any kind of mid- or large-sized multinational cannot provide health care coverage or travel. There’s going to be so much employee pressure. We will tend to see it from any company that cares about their reputation, or has white-collar employees.”

Taylor also sees polarization and sorting increasing, and certain companies shying away from red states, as companies see the risks of providing health care and dealing with pushback from politicians, like Disney’s tussle with Florida Gov. Ron DeSantis, who orchestrated a move to strip the company of its special tax district because of its stance against the state’s so-called “Don’t Say Gay” law.

“Would you want to deal with that?” Taylor said. “Companies are lying awake at night, sweating, worrying about becoming the next Disney.”

Amid these challenges, there are potential states that may see more attention from firms looking to avoid the challenges of locating in states like Texas or Florida, while still tapping into vibrant local economies and talent pools. Boyd suggested that firms may divide their locations, placing high-tech, white-collar work in blue states while locating manufacturing and less skilled labor in red states. In addition, states like Colorado and North Carolina, both led by pro-business Democrats with great job creation numbers and low taxes, and Nevada, with a growing tech sector and the right to abortion enshrined in state law, present less expensive options for those seeking to cater to a more liberal-minded workforce. Reno, Nev., which has seen extensive growth due the Tesla Gigafactory and low tax rates, offers an easy relocation option for Silicon Valley firms bristling at California’s higher costs of doing business.

“Austin, because of all the growth and success, is already experiencing a lot of wage and real estate inflationary pressures,” Boyd said. “This [Dobbs decision] on top of that could be another economic development narrative for a market like northern Nevada.”

Boyd said blue states in the Northeast, such as New Jersey, are positioning themselves as inclusive, welcoming business climates. Netflix, which has checked out Fort Monmouth, N.J., as a potential production site, reportedly received a call from New Jersey Gov. Phil Murphy after Georgia, another film powerhouse, passed its new voting laws.

Not everyone believes that the draft Dobbs decision has the potential to radically change how companies look at locations. Incentives, labor availability and costs, as well as logistics and supply-chain issues, impact these decisions much more than political issues, said C.J. Girod, managing principal and founder of Responsible Economic Development Incentives, a consultancy that works to eliminate wasteful spending in economic development.

“It’s obviously an issue where there are folks on both sides, and I don’t know that corporations want to be in the business of picking a side on this,” Girod said. “In my mind, this is different than other issues, and it’ll be harder for corporate America to take a position on this, versus, say, the transgender bill in North Carolina.”

Business as usual, especially the way that massive money is spent on subsidies to lure business, isn’t likely to change due to political disagreements, said Pat Garofalo, an incentives expert and the director of state and local policy at the American Economic Liberties Project. For instance, Disney’s battle over the special tax district in Florida hasn’t impacted its chance to land a $570 million state subsidy for a new campus in Lake Nona, Fla.

Others see the political winds changing, causing a pushback against ESG requirements and so-called “woke culture,” said Boyd. There’s also a question that executives are asking about blue state cities, and their issues with crime, homelessness and cost of housing issues. It seems like office politics has taken on a new, more difficult dimension.

“We’re in this spiral,” Taylor said. “And this is only going to get worse in the near future.”