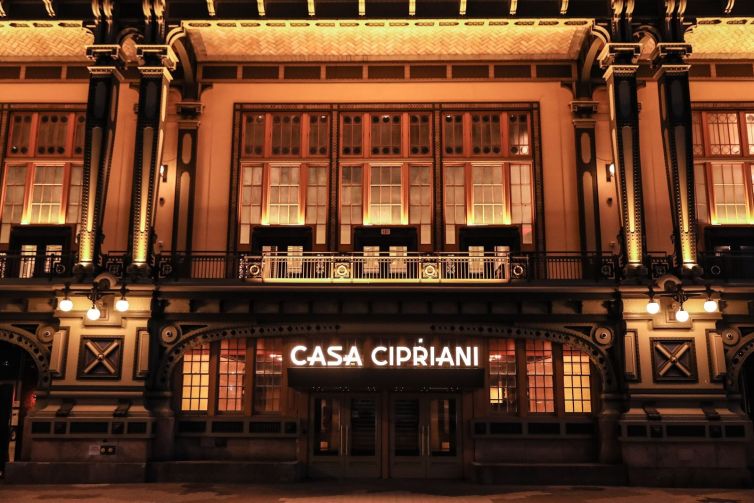 Located at 10 South Street and also known as the Battery Maritime Building, the Beaux Arts-style building was once a ferry terminal that was listed on the National Register of Historic Places in 1976.

Centaur Properties and Italian hotel and leisure company Cipriani took the reins in converting the asset into a hotel and event space in 2017, with Midtown Equities stepping into the project as an investor and development partner in 2018.

Today, Casa Cipriani features 47 luxury hotel rooms and suites — with private balconies overlooking the Brooklyn Bridge and Statue of Liberty — plus a private club and 15,000-square-foot spa. The glamorous property also includes a restaurant — inspired by a French ocean liner of the 1930s — that’s open for breakfast, lunch and dinner every day.

“We are very proud to be a part of the redevelopment of the iconic Battery Maritime Building in Lower Manhattan,” Tony Fineman, co-head of originations at Acore, told CO. “Our friends at Midtown Equities, Cipriani and Centaur did an outstanding job with the restoration and renovation of the property, and the final product is one of the best projects I have been involved with in my career.”

Fineman described the event space as “extraordinary. The hotel rooms are beautiful, and the restaurant and club floor is an amazing collection of spaces with magnificent views. Since the completion of the construction, I have attended several events at the property and visited the restaurant and club numerous times. I can confirm, firsthand, that the operation of the property is impeccable — and the food is great.”

Cipriani family patriarch Giuseppe Cipriani founded Harry’s Bar in Venice in 1931, named after Hotel Europa patron Harry Pickering. Cipriani was a bartender in the hotel at the time, and legend has it that he loaned Pickering 10,000 Italian lira after his family cut him off financially. Two years later, Pickering returned and gave Cipriani 50,000 lira, enough to open a bar that would be called Harry’s Bar. The spot became popular with celebrities including Ernest Hemingway and Humphrey Bogart, and rumor has it that carpaccio and Bellini cocktails originated there.