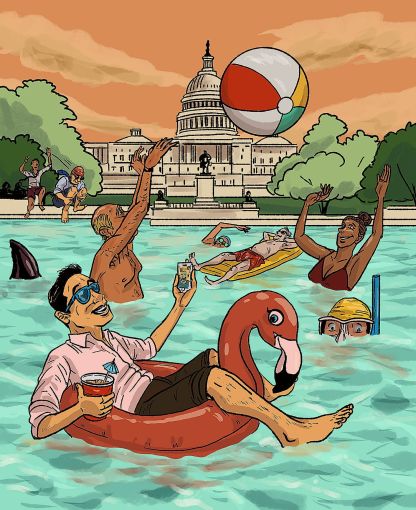 Who’s got the right stuff when it comes to real estate in the nation’s capital. Illustration by Spencer Alexander

Let’s get something straight, big shots: You wouldn’t even have your office if you didn’t have a good real estate broker! (OK, we mean your literal office, not the elected/appointed one. But it remains true.)

That’s why Commercial Observer puts out an annual list of Washington, D.C.’s 25 Most Powerful Real Estate Players. So that everybody knows who the real machers in Washington are.

Just in the last month or so, there has been a palpable shift in D.C. (as is the case almost everywhere) from protecting one’s real estate to reopening and recovering from the worst year ever. There’s a new optimism about all the projects that everyone was rightly worried about during the pandemic. But now, affordable housing, the arts, Amazon’s HQ2, National Landing and more are all roaring back. (Also roaring back: a union push at the Washingtonian, but that’s another discussion.) And it was the people who are shepherding those projects back that won our respect.

Of course, politics is not just national. In New York, a months-long primary season for the next mayor and City Council came to an end, sort of.

While the final results won’t be known until sometime in July, thanks to ranked-choice voting, it looks like a big field of Democrats have been winnowed down to the final three: Eric Adams (currently with the most first-choice votes), Maya Wiley (second) and Kathryn Garcia.

At least two of these three (Adams and Garcia) offer a general sigh of relief for the commercial real estate industry. (Wiley, maybe not.) But, all are passionately in favor of more affordable housing, which should make the real estate market breathe easier.

The next mayor is going to have a lot to deal with in the coming years, real estate-wise. Last week, the Rent Guidelines Board agreed to a six-month freeze on rents on one-year leases, to be followed by a 1.5 percent increase. (Something which made nobody happy.) And the next mayor will have to think a lot more about proptech, and how it’s being used in managing the city’s real estate and construction.

Finally, in political/real estate news, the Centers for Disease Control and Prevention issued what it’s calling its ‘final’ eviction moratorium extension, which will run through July. This has not made landlords very happy.

“Each passing month further escalates the risk of losing an ever-increasing amount of rental housing, ultimately jeopardizing the availability of safe, sustainable and affordable housing for all Americans,” Bob Pinnegar, president and CEO of the National Apartment Association, said in a statement.

It was not a great week in South Florida.

On Thursday morning at 2 a.m., Champlain Towers South, a condo building in Surfside, collapsed, destroying 55 homes and killing an unknown number of people.

As of Friday morning, up to 159 people still hadn’t been accounted for amid ongoing rescue efforts. The governor declared a state of emergency and President Biden deployed federal agencies to help in the effort.

The week in multifamily and condo deals was kind of off the hook.

Blackstone, in furtherance of their competition with Amazon to own every piece of property conceived by man or beast, shelled out $6 billion for the single-family home rental firm, Home Partners of America.

They weren’t the only ones thinking big with a capital billion. Cammeby’s Rubin Schron and Harbor Group International are purchasing 5,000 housing units across 40 buildings in New Jersey for $1 billion.

This shouldn’t make the deals inked last week in the hundreds of millions (or tens of millions) be treated with less seriousness or awe. Deutsche Bank and Starwood Property Trust provided a $231 million loan to Angelo Gordon and Townscape Partners for their ultra-luxury condo development, 8899 Beverly, in West Hollywood. (And, apparently, Deutsche and Starwood are also teaming up to do the financing for 8150 Sunset Boulevard.)

Likewise, a $192 million deal for the land under Vornado’s 909 Third Avenue? Nothing to sneeze at!

In Southern California, Harbor Group acquired a 220-unit community between L.A. and the Inland Empire, for $46.75 million.

And Miki Naftali is also liking what he sees on Manhattan’s Upper West Side: The Naftali Group shelled out $71 million for the apartment building at 215 West 84th Street, which is apparently the site where Edgar Allan Poe composed “The Raven.”

Worries about the market overheating? Pshaw. Or, as Naftali might put it, nevermore!

Leasing had it pretty good, too!

Could it be? Could retail have had a good week?! (We’re not going to ask if it’s finally exiting the tailspin. That would be too much to hope for. Especially after reading the latest retail report from REBNY.)

Indeed, there were some eyebrow-raising leases that were signed. Target inked a 31,000-square-foot lease at One Court Square in Long Island City.

Moreover, Rumble, the boxing fitness concept, took 4,000 square feet at Kushner’s 285 Lafayette Street, where it will apparently stream fitness classes from the storefront.

And, some retailers seem to think it’s safe to ink leases for their office space. We’re talking about Fashionphile, which just leased 60,000 square feet for their first-ever office at RXR Realty’s Starrett-Lehigh Building.

There were other leases to get excited about, too.

The automation software designer, Hyperscience, got proactive last week: They tripled the amount of space they had at One World Trade Center.

Of course, the big question for Manhattan’s office leasing right now is the question of tech. It has been the savior of the office market during the past 15 months. And the biggest tech player in New York real estate is Google, having purchased two of the most expensive offices in the city’s history.

What is Google’s ultimate game plan? Has its leasing spree finally come to a close?

CO took a deep dive into the company’s New York real estate strategy and found one answer that was somewhat disappointing, and one that is interesting. (For some of Google’s Miami dealings, we learned that Moishe Mana is working with their sister company, Sidewalk Labs, on the development of his new Wynwood development.)

All in all, it makes for plenty of good Sunday reading. See you next week!