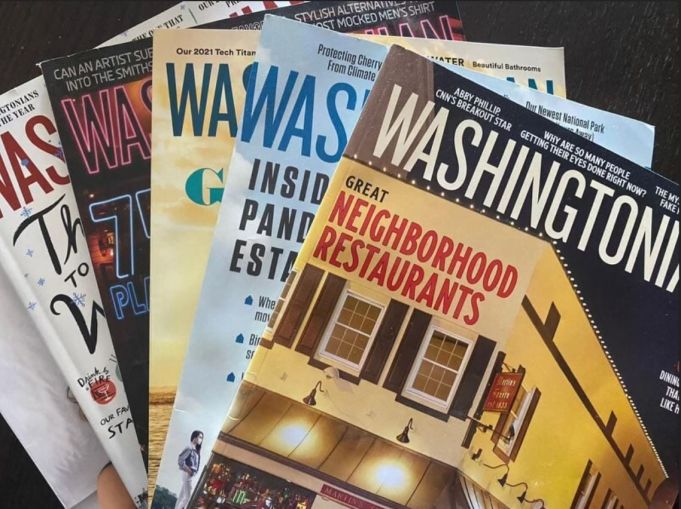 Staff at the Washingtonian, a monthly magazine based in D.C., have unionized. Photo: Courtesy Mimi Montgomery

The staff of the Washingtonian magazine have begun organizing a union in an ongoing drama that initially erupted over their CEO’s top-down back-to-office approach.

Last month, staff of the monthly D.C. publication organized a one-day strike after CEO Cathy Merrill published an op-ed that many saw as threatening staffers if they did not return to the office.

Staff say that the reason for the unionization effort is to advocate for better conditions, and was not prompted by the op-ed incident alone.

“This union is a response to much more than just the op-ed,” said Associate Editor Mimi Montgomery. “I think that it just became really obvious to the folks within the union that the future of journalism, and ensuring a safe and happy workplace for journalists, is really dependent on making sure that everyone has a seat at the table. That directly correlates like what a union is trying to do.”

After informal conversations over text, staff members took to union cards to vote and passed the 30 percent threshold of workers needed to start the formal election process. At this point, the management of the Washingtonian could voluntarily recognize the union or it could be put to a formal vote.

Washingtonian management informed staff in a memo that they would not recognize the union, said Montgomery and Politics and Culture Editor Rob Brunner. Merrill declined to comment on the unionization efforts.

If recognized, the Washingtonian will join the Washington-Baltimore News Guild, which represents The Washington Post, Baltimore Sun and Foreign Policy, among others. It includes editorial staff members photographers, designers and web designers, said Brunner.

The pandemic, too, played a role in the union, he said, and that, ironically, working from home has brought the team closer together.

“The interesting thing about the pandemic is we haven’t been working in an office, but weirdly, it’s brought us all together,” said Brunner. “We’ve always been close as a small staff, but just over the last year and a half, we’ve really pulled together in a way that I think was gratifying for a lot of us. I think the fact that we are so tight-enabled us to have good conversations about this over the however many months since we started talking about [a union]. And it made it pretty easy to have really good conversations about why this was the best way to move forward.”

If the union is formed, Montgomery said it will work to get more transparency in management decisions, fair compensation for staff members (including cost-of-living raises), better family leave, and harassment reporting. It will also advocate for a concrete plan to increase diversity in the magazine.

The Washingtonian Guild — the name of the nascent union — took to Twitter on Wednesday to garner support for management voluntarily recognizing the union, requesting individuals to send letters asking the CEO to recognize the union. More than 300 letters have been sent as of press time.

The Washingtonian gained national media attention in May, after Merrill published a piece in The Washington Post titled, “As a CEO, I want my employees to understand the risk of not returning to work in the office.” (The title was later changed.)

In it, Merrill made some of the conventional arguments for the office, followed by the argument that employers had a “tempting economic option” to demote employees to “contractor” status if they chose to miss out on “extra” in-person office interactions. A demotion to contractor would result in an employee’s loss of health care, 401K matching and other benefits, she wrote.

“I was part of the strike that day,” she Montgomery. “It was a difficult and frustrating day.” But both Brunner and Montgomery said the decision to form a union was about much more than the op-ed.

“I don’t think it was any one thing that prompted it,” said Brunner. “I think, more than anything, it was just kind of seeing the way the industry is going, and watching so many other newsrooms do this, and feeling like that’s the best way for us to make sure that Washingtonian is both a great publication and a great place to work.”

Merrill has since walked her statements back in an internal memo and the magazine formed an office reopening committee with editorial, sales, custom print, administrative and digital staff members. A committee member, Andrew Beujon, told Commercial Observer at the time that he felt the paper had already essentially formed a union when the staff went on strike. No one missed the lesson that collective action worked, he added at the time.