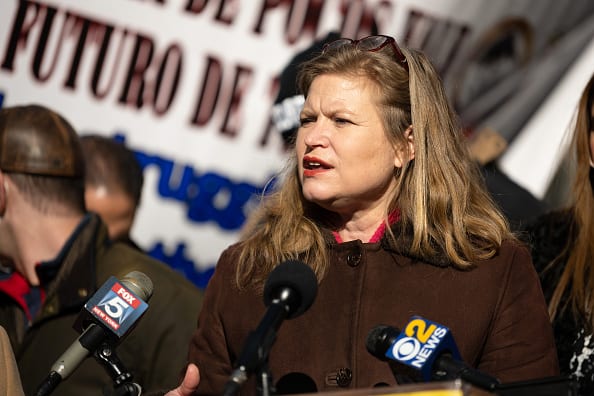 Over the past few years, Kathryn Garcia has reformed New York City’s commercial trash hauling industry, distributed 130 million meals during the pandemic, and overseen a repair program in public housing.

The 51-year-old Brooklyn native was raised in Park Slope and went to Stuyvesant High School in Downtown Manhattan, before earning bachelor’s degrees in economics and history from the University of Wisconsin-Madison. She got her start in city government at the Department of Environmental Protection in 2006. Garcia rose through the ranks of the agency, which focuses on water and sewer systems, until becoming its chief operating officer from 2012 to 2014.

After that, Mayor Bill de Blasio appointed her commissioner of the Sanitation Department. At the head of the world’s largest sanitation agency, she oversaw 9,700 employees and the collection of at least 3.2 million tons of waste annually. During the first half of 2019, she also served as the interim chair of the New York City Housing Authority, managing the agency’s lead remediation efforts in public housing buildings.

At the same time, she also found the bandwidth to roll out an extensive plan to reform the city’s poorly regulated commercial trash hauling industry, which de Blasio signed into law in November 2019.

And, at the beginning of the pandemic, the mayor tasked her with setting up a massive effort to feed 1.5 million New Yorkers daily, including creating a meal delivery program, grab-and-go meals at schools, and more food pantries.

As part of our new series on the mayoral race, we recently spoke with Garcia, who quit her job as sanitation commissioner last fall to start campaigning for mayor. The following interview is condensed and edited for clarity:

Commercial Observer: How does your housing platform differ from the past eight years of Mayor de Blasio’s housing strategy?

Kathryn Garcia: My housing plan’s really focused on creating housing that heals. By that, I mean that we are looking at units, but also ensuring that we are doing large numbers of supportive housing, and bringing together homeless policy and housing policy under one umbrella as we move forward. I think that is absolutely critical, so everyone is pulling in the same direction. And that is a real different approach than others have had on that, and, also, really thinking about how housing policy is incorporated into climate policy, when we know that 40 percent of our greenhouse gas emissions come from heat and hot water.

What neighborhoods in New York City would you rezone if you were elected mayor?

On this, I clearly would be doing this SoHo/NoHo rezoning as well as the Gowanus rezoning. I think those two need to happen and move forward. We also need to be focused on rezonings where we know there is a strong transit infrastructure, because, if you live near a subway station, that gives you access to more educational opportunities and more job opportunities.

Any other rezonings that are not currently in progress?

I have not identified another location, but those are the two that I would definitely be supportive of.

If elected, how would you change the mandatory inclusionary housing policy? Or would you keep it the same?

I want to see more expansion. I would really like to see a more citywide approach to housing, so that we can get more projects moving. There is a real scarcity of housing at all levels. That, I think, has been problematic probably since before I was born. And that is also about streamlining our processes to make it easier to build as we move forward.

And in what way would you streamline the processes to build?

So, it’s about accelerating approvals for new housing construction, and streamlining the ULURP and environmental review process, as well as permit applications and inspections at the Buildings Department. And there are several other sister agencies that are not well coordinated.

As someone who built city buildings, the fact that I, as commissioner, needed an expediter to get through that process means that we don’t have a system that is working. But, we also know that we should be ending apartment bans, and making it [possible] to legalize basement apartments and accessory dwelling units, so that we can create real sustainable and efficient means for providing housing and ensuring that we develop single-room occupancy apartments that are safe, because approximately a third of households in the city of New York are single adults.

And, as mayor, would you push to reform the city’s property tax system, which has long been considered outdated by both owners and tenants?

I completely agree that it is outdated and completely inequitable. If you look at the data, it’s pretty shocking how divergent it has gotten over time. And I know that we can work together to really figure out a better path forward that is much more equal and much more transparent.

And you don’t need a high-end computer to figure out what your property taxes are. I do think we need to make sure that as we make those changes, that they get phased in, so that we are not dislocating people who have lived in their neighborhoods for long periods of time. But I think there’s a real opportunity right now to fundamentally rethink how we do property taxes, because it feels to me as if it’s a bunch of little tiny fixes that actually distort the system a little more every single time we try and do a repair. And starting from scratch seems the way to go at this point in time.

And I understand that that will be a longer conversation through our state elected officials. And they’re part of the conversation moving forward, but I think it’s one we’re ready to have.

What steps would you take to address the city’s homelessness crisis? And how would you grapple with the current shortage of shelter beds and many neighborhoods’ resistance to shelter construction and conversions?

I think that fundamentally rethinking our homeless strategy and having it be more intentional toward getting people into permanent housing has to be the direction we’re going in.

Because, in the long run, I honestly think it will be not only much better for families and for single adults to have permanent homes for all the reasons why permanent homes make a difference in someone’s life — whether or not you’re trying to study for your test tomorrow or need to get ready for work tomorrow — I also think it’ll be cheaper in the long run. We are paying a lot of money for not a great outcome at this point. And the real rethinking of that is about increasing permanent housing.

And there are a couple ways that we need to do that. One is, particularly for homeless families, we provide them with a voucher that — I don’t know when you could have gotten an apartment for that amount of money, it might have been, you know, 1965 — but it is not today. And increasing that to closer to market rent would fundamentally change the conversation and allow people to be in permanent homes.

In addition to that, we know we need more supportive beds. There are going to be opportunities with the changing dynamics of the market, with empty hotels, with empty offices to do conversions, where you have the supportive resources on-site that make it possible for people to either start to deal with their mental health issues or deal with their substance abuse issues, and be able to lead more productive lives and begin to get thinking about getting jobs and getting out in the workforce again. All of these things can happen when you have a permanent place to live.

The de Blasio administration has been moving forward with the proposal for a citywide hotel special permit, which would require City Council approval for any new hotel that would be built in the five boroughs. And the real estate industry believes it would be a death knell for new hotel construction in New York City. Do you have a position on the citywide hotel special permit?

Yeah, one of my concerns about hotels has always been that, under the current zoning, the environmental [impact] and the question of whether the infrastructure can support it is never reviewed. ‘Cause they’re allowed to do it as of right. And do you have the sewers and the water mains in the street that support a building like that?

So, I am supportive of the special permit change. But I also think that, right at this moment, hey, we know that we have an overabundance of hotel rooms across the city and I am much more concerned that they are all going to be empty for quite a while. And that is very concerning, because you need spaces to be active.

So would you advocate to convert them to some kind of housing?

Absolutely. I think we don’t want empty space, particularly when you’re thinking about a scarcity of homes for people. And then, you have buildings that are empty. We should be looking at doing conversions in much the same way, you know, much of Lower Manhattan got converted after 9/11.

New York City has struggled for a long time to create enough housing for low-income New Yorkers. How would your housing strategy address that problem of financing low-income housing?

There are two pieces to that. One is we have to fundamentally shore up NYCHA. We need to be getting investments into those apartments, because, if we don’t, then we’re actually making a choice to allow them to be condemned through deterioration. There are already so many terrible things about those living conditions. And ensuring that we’re using public-private partnerships to get that done now, I think, is incredibly important.

The second is, I believe we need to focus our subsidy money on building affordable units under 30 percent area median income as we move forward. That is where we know the biggest need is.

I’m trying to ask at least one non-policy question at the end of these interviews. So, where was your first New York City apartment? And what was it like?

Oh, my first New York City apartment was actually in Park Slope. It was a four-story walk-up that I shared with three friends with one bathroom, which sort of worked out OK, until the boyfriends started moving in. And, then, the lack of more than one bathroom was a challenge. And the tiniest kitchen ever, oh my goodness. But we did cook there. We didn’t have a lot of money to go eat out.

And what pre-COVID activity do you miss most?

Oh, I miss, you know, I missed the ability to, like, go out and meet people, and go to a show and have dinner. I really miss this sort of social side of the world. I also miss going to work. But, you know, we are all in COVID, we will all be on Google. Forever. But, I like the opportunity to even just bump into people on the street — which, you know, I think people who are not from New York City wouldn’t think that that happens, but you do, sort of, sometimes randomly run into people.

The other thing is, it’s hard to tell if you recognize someone with a mask on.