It's not just the pandemic, either 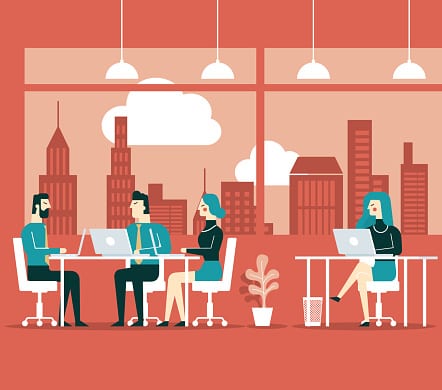 For decades, sure. Banks and ancillary industries, such as insurance and the real estate industry, itself, animated the borough’s commercial property. The acronym FIRE — finance, insurance and real estate — became literal shorthand to describe where most office leasing activity came from in Manhattan.

That’s changing. Now, it’s technology companies driving the leasing market in a way never seen before. They and companies in related industries, such as advertising, marketing and information services — or TAMI — account for most of Manhattan’s leasing momentum coming out of COVID and for many of its biggest deals during the pandemic.

It’s not just the pandemic, either, that’s driving what’s increasingly looking like a generational shift in what makes the Manhattan office market tick. Tech-centric brand names, such as Google, Facebook, Amazon and Disney, are creating de facto campuses within the borough’s concrete canyons and amid its glassy shafts, which, in turn, are seeding smaller hubs elsewhere in town.

“You are now talking about a bigger ecosystem writ large,” said Julie Samuels, executive director of Tech:NYC, a nonprofit booster group for the tech industry. She said she sees these larger companies as incubators for new talent — incubation that assures future activity in the leasing market.

The ecosystem’s growth is already evident in the numbers, past and present.

In 2010, TAMI companies occupied 18.5 percent of office space in Manhattan, according to brokerage Cushman & Wakefield. In 2020, they filled out 25.1 percent. Meanwhile, financial services and insurance went from just shy of 37 percent of space to 29 percent. (The real estate industry’s footprint grew during the decade, but remains below 7 percent.)

The biggest leases of 2020 reflected tech’s momentum. In the depths of the COVID crisis, when the conventional office lease seemed to face existential uncertainty, Facebook signed what turned out to be the largest such deal of the year: for 730,000 square feet at Vornado Realty Trust’s planned Farley Post Office conversion at 390 Ninth Avenue.

And the demand for space coming out of COVID appears to be coming from these companies, signaling that the shift that is underway really is just that: a shift, rather than a blip, brought on by the coronavirus.

Next to government agencies, tech and related companies are demanding, on average, the biggest office footprints in Manhattan post-pandemic, according to research from VTS. It tracks newly prospective tenants’ tours of office space in major U.S. markets, and is itself an expanding tech firm, with 185 new employees since the pandemic’s start.

The average footprint that new tech tenants are looking for in terms of non-Class C space in Manhattan was 37,200 square feet in the three months leading up to late April, according to VTS. That’s more than double financial services’ desired footprint of 16,500, and well ahead of every other private sector that VTS tracks.

Tech also has the momentum in terms of office leasing. The average number of new tours by tech companies per month was up 255 percent for February, March and April vs. the three months before. That is well ahead of the numbers of such searches by companies in other industries, including financial services. The number there jumped 102 percent.

Finance still edges tech in terms of the number of new tenants touring office space — 58 on average per month vs. 19 by VTS’ last count — but it’s the size of the space requirements that belies the shift in who’s driving the future of the Manhattan market.

“If you look at this from a square-footage perspective, I think this is where the real story is,” Ryan Masiello, VTS’ co-founder and chief strategy officer (and, for years, a leasing broker with JLL), said at the end of April. “In this current moment, finance is still outperforming tech relative to the contribution of square footage; but tech has doubled its contribution in the last month.”

At the same time, finance has pulled back in its office needs, while tech has signaled that it intends to sprawl over Manhattan like a houseguest’s stuff on a holiday weekend.

JPMorgan Chase, the nation’s biggest bank by assets and Manhattan’s largest private occupier of office space, is subletting 800,000 square feet as it consolidates in a new headquarters at 270 Park Avenue. Deutsche Bank, HSBC and Citigroup also plan to consolidate and pare their office footprints.

“Remote work will change how we manage our real estate,” JPMorgan Chase Chairman and CEO Jamie Dimon said in his annual message to shareholders in early April, rippling shudders through the commercial real estate industry. “As a result, for every 100 employees, we may need seats for only 60 on average. This will significantly reduce our need for real estate.”

The biggest tech players’ moves over the past 12 to 18 months, on the other hand, highlight a much different trend.

There was Facebook’s Farley Post Office lease in 2020, and the more than 1.5 million square feet that the social media giant leased at Hudson Yards the year before. E-commerce kingpin Amazon is converting the old Lord & Taylor flagship building at 424 Fifth Avenue into office space for up to 2,000 employees. Amazon — which, as of March, had also taken over a dozen distribution warehouses in New York City — closed on its buy of the building in March 2020.

Google parent company Alphabet continues to collect space a bit farther south, on the West Side, turning the Hudson Square area into its de facto East Coast campus. The company in December 2020 topped off its conversion of the 1.3 million-square-foot St. John’s Terminal at 550 Washington Street. It also occupies 315 and 345 Hudson Street and the Chelsea Market at 75 Ninth Avenue in the neighborhood.

Disney, too, is building a campus in Hudson Square with co-developer Silverstein Properties. The 1.2 million-square-foot hub at 137 Varick Street is due to include the headquarters of its streaming service, Disney+. The foundation work for the hub wrapped earlier this spring.

Also this spring, Google announced that it planned to invest $7 billion in offices and data centers in major markets nationwide, including New York. The investment would run along with, and help spur, some 10,000 new jobs at the company, too, Alphabet and Google CEO Sundar Pichai said in a blog post.

The new jobs would be in keeping with a broader trend in New York that fuels this demand for space. Nearly 1 in 5 new job postings in the city during the pandemic were in tech, with “software developer” and “engineer” as the most in-demand positions, according to a study released in May by think tank Center for an Urban Future. Only health care came close in terms of want ads.

“Demand for tech hiring in New York was also more than double that of finance, more than triple that of marketing, and almost five times larger than demand for hospitality or for education,” the report said.

This job growth in the tech industry — the number of New York City jobs rose 45 percent from 2008 to 2018, even before the major expansions that Google, Amazon and Facebook announced, according to the latest figures from Civic Hall, an educational nonprofit — parallels tech’s increasing presence in Manhattan’s office leasing market.

Also, there’s little indication that COVID will dent this presence to the degree that it has with finance. Tech companies are planning to return to these expanding office footprints.

A March survey of 120 tech companies from brokerage Savills found that nearly three-fourths plan to have employees back in the office at least three days a week by the fall. Only 11 percent said they wouldn’t return until 2022. Even this hybrid situation, too, means that there’s plenty of people to fill the office space in the fall, given the pace of hiring prior to, and during, the pandemic.

“What we are hearing is that a lot of tech companies are going to be heading back to the office after Labor Day,” Tech:NYC’s Samuels said. “I have this hunch that, once a few people start going back, a lot of people will start going back.”