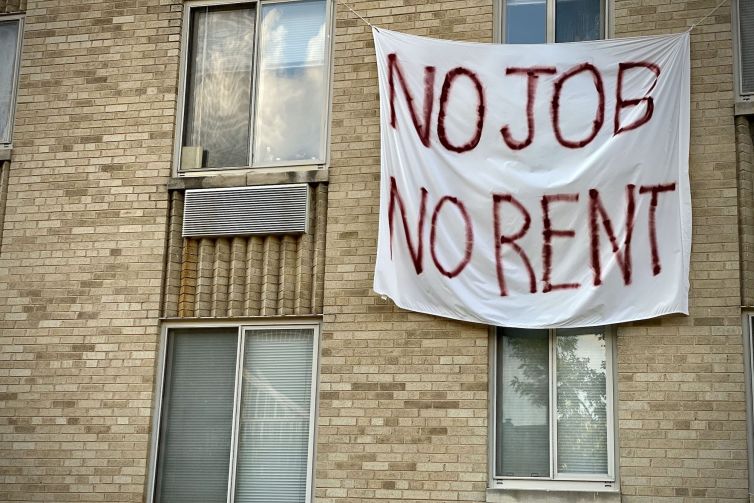 A banner against renters' eviction reading "no job, no rent" is displayed on a controlled rent building in Washington, D.C. Photo: ERIC BARADAT/AFP via Getty Images

In what is “intended to be the final extension,” President Joe Biden’s administration pushed the national eviction moratorium deadline an additional month for tenants struggling to pay rent due to the pandemic.

In the face of an impending “eviction cliff,” Dr. Rochelle Walensky, director of the Centers for Disease Control and Prevention, extended the moratorium from June 30 until July 31, according to The Associated Press. It was first put in place last year and has been extended multiple times, and also challenged in court over its legality.

Lawmakers had called for an unspecified extension to allow the nearly $47 billion in emergency rental assistance included in the American Rescue Plan to get into the hands of tenants and landlords. (The eviction moratorium and its new extension also applies to foreclosures on homes with federally backed mortgages.) Diane Yentel, president of the National Low Income Housing Coalition, said an extension of the eviction ban is “the right thing to do — morally, fiscally, politically, and as a continued public health measure.”

If the national ban does expire, it would not affect other state-level moratoriums. But landlords struggling to collect rent have been strongly opposed to more extensions.

“Each passing month further escalates the risk of losing an ever-increasing amount of rental housing, ultimately jeopardizing the availability of safe, sustainable and affordable housing for all Americans,” Bob Pinnegar, president and CEO of the National Apartment Association, said in a statement. “Flawed eviction moratoriums leave renters with insurmountable debt and housing providers holding the bag as our nation’s housing affordability crisis spirals into a housing affordability disaster. The CDC must abide by their promise and allow the moratorium to expire at the end of July.”