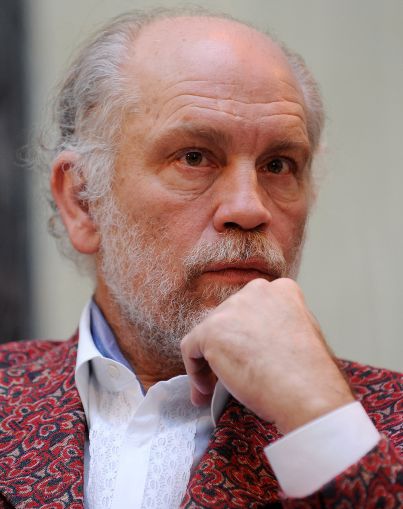 US actor and designer John Malkovich during a press conference on his exhibition entitled "Constantly Being Born - Clothes and Pencil Dreams" held at the Luigi Pecci Museum of Modern Art in 2010. Photo by Giacomo Morini/Pacific Press/LightRocket via Getty Images

Remember the scene in “Being John Malkovich” when John Malkovich crawls inside his own intracranial portal and is cast into a universe of singing, carousing, laughing John Malkoviches as far as the eye could see? Where everyone around him shared the same bald, sui generis look and every word out of their mouths was simply: “Malkovich, Malkovich”?

This week the ubiquitous megacompany announced a new life sciences fund called Blackstone Life Sciences Yield with $1.6 billion to play around with.

This would be a milestone for almost any company. But earlier in the week it completed a deal more than eight times bigger: the $13 billion acquisition of American Campus Communities, the largest developer and owner of off-campus student housing in the United States.

And, because this constitutes a slow week for them, or something, Blackstone also expanded its footprint at the Boston Properties-owned 601 Lexington Avenue by 200,000 square feet. (Don’t these people have kids on spring break?)

There are other companies in the world, you know, and other deals happening, mostly, it seemed, on Madison Avenue.

In Long Island City, Finback Brewery announced plans to open a 3,800-square-foot microbrewery and taproom at the base of the Durst Organization’s luxury apartment building, Sven, at 29-59 Northern Boulevard (speaking of Durst, this week it also landed $100 million in financing from JPMorgan Chase to renovate 825 Third Avenue, something to definitely drink to!), and Opentrons, a company that builds lab robots, signed a massive 94,000-square-foot lease to nearly double its space at 45-18 Court Square.

Finback wasn’t the only good retail deal last week, either; the biggie was Google opening up a new 3,980-square-foot retail outlet at 134 North 6th Street in Williamsburg (with cellar space of roughly the same size). That’s one to stop anyone in their tracks. But Showfields — the store that mixes retail shopping with art and theater — will also open in Williamsburg at 187 Kent Avenue, known as The Kent House. And fashion accessories retailer BAGGU, the home of the $34 Duck Bag, took 2,400 square feet at 91 Grand Street in SoHo.

That was just New York City retail, people. South Florida also got in on the action with Frette, the luxury bedding store, and Ara Vartanian, the Brazilian jeweler, each taking space at the super-swanky Bal Harbour Shops. (Oh, and Maria Tash, another famed jeweler which had been operating a pop-up at the mall, essentially put a ring on it: It took out a 3,300-square-foot lease at the mall.)

Of course, it wasn’t all retail leases. There were other leases, too, like Aon, the global professional services company, taking 18,634 square feet at 701 Brickell Avenue, and Keralty Hospital Miami, formerly known as Westchester General Hospital, snapping up a 13,800-square-foot lease for another location at MedSquare Place, a new medical office development 10 miles west of Miami.

Our old friend Harry Macklowe made his foray into South Florida official. The developer and art collector extraordinaire plunked down $31.9 million for a 1.64-acre vacant parcel between Dadeland Mall and the Metrorail tracks from Rilea Group and Euroamerican Group, with plans for a two-building, 650-unit rental.

But even more eye-catching, according to public records, somebody named Randall Davis (an individual whom, sadly, we don’t know anything about) spent $363 million on a large developable parcel along the water at 1201 Brickell Bay Drive, purchasing it from Florida East Coast Realty and making it one of the most expensive land trades in Miami history. (We might have some work to do in trying to piece together more on the mysterious Mr. Davis.)

Sales racked up beyond South Florida too. In Downtown Los Angeles, Laguna Point Properties dropped $402 million on a portfolio of 1,037 apartments from developer Barry Shy. While this works out to some $387,657 per unit, it might not be such a lavish investment. Rents in Southern California have exploded at more than twice the rate of inflation, according to a new report by NAI Capital.

In Washington, D.C., Jair Lynch Real Estate Partners is teaming up with Nuveen Real Estate for the fifth time for its purchase of Jamison at Dakota Crossing, a 236-unit apartment complex, for $78 million. And apartment rents in the D.C. area, too, are skyrocketing: The last 12 months saw the sharpest annual growth rate in decades, according to a Marcus & Millichap report.

And outside the world of multifamily were more bold sales this week; Harrison Street, the Chicago-based alternative asset investment firm (which has about $44 billion in assets) sold off its1.2 million-square-foot, 27-property national health care portfolio in 10 states to NorthWest Healthcare Properties for $600 million.

In New York, SL Green Realty Corp. reversed a years-long trend of selling off assets to buy something — and not just something. An office building! In this case the property in question is 450 Park Avenue in Midtown, for which the real estate investment trust paid $445 million to Oxford Properties and Crown Acquisitions.

Bobby Zar’s ZG Capital and Rialto Capital Management are putting up $105 million to purchase 45 East 53rd Street which formerly was Santander’s New York headquarters, from MEK Management Services — but it should probably be noted that the deal is for about 12.5 percent less than what MEK purchased the office tower for a decade ago.

And, now, to get one’s mind away from Blackstone …

We’ve been thinking a lot about proptech lately. For one thing, Commercial Observer hosted its own virtual proptech forum a week ago (the first in a series) where some of the biggest names in proptech explained what’s going on in the sector.

Second, CO co-sponsored with the Real Estate Board of New York the 2022 PropTech Challenge, now in its fifth year. In fact, CO was one of the judges in the competition for recognizing innovative new technologies that will help New York City buildings get to net zero carbon emissions.