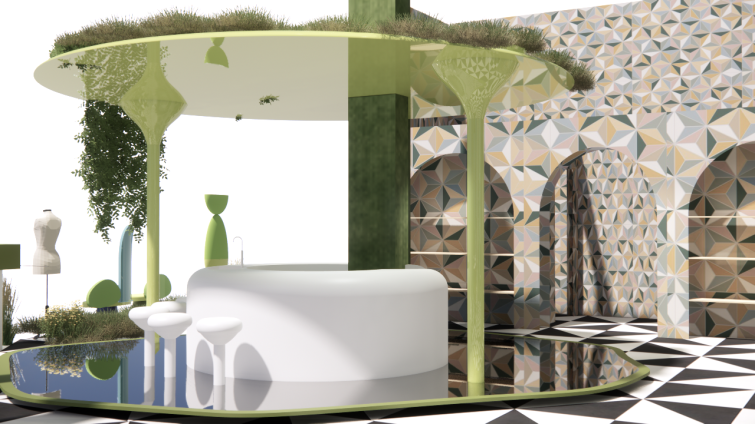 The courtyard of the new House of Showfields location. Photo: MONA

Williamsburg’s newest shopping destination is a six-room home where everything is for sale.

Showfields — the store that mixes retail shopping with art and theater — will open its first Brooklyn outpost at CW Realty Group’s 187 Kent Avenue, also known as The Kent House. The new shop, dubbed “House of Showfields,” will sell sneakers, clothing and skincare products.

The 11,500-square-foot location will open in June at the building between 3rd Street and Metropolitan Avenue, according to Retail by MONA, whose team of Brandon Singer, Michael Cody and Max Kreinces represented Showfields in the transaction. Asking rent was $125 per square foot in the long-term deal, according to the brokerage.

Showfields’ new space will include a living room, dining room, foyer, lounge and courtyard designed to look like the outdoors — while being contained in the seven-story building. It will be tough to beat the decor at its NoHo location — which includes a multicolored, faux fur-clad slide and an exhibit with gold streamers and balloons plastered on the ceiling, according to its website.

“House of Showfields takes all we’ve learned until today to create a better discovery and shopping experience,” Tal Zvi Nathanel, CEO of Showfields, said in a statement. “This is more aligned with today’s customer but also creates a new and effective acquisition tool for brands to have as part of their omnichannel strategy.”

MONA’s team spent nearly two years looking for a new location for Showfields after it found the retailer’s first New York City outpost at the four-story 11 Bond Street in NoHo in 2018.

“Williamsburg is on fire from a retail perspective,” Cody said in a statement. “We must have toured every retail space in Williamsburg four times, and this is the one we kept coming back to time and time again.”

The deal for the property closed on April 8, according to MONA.

Newmark’s Barry Fishbach, Alex Hedaya and Karen Bellentoni handled the deal for CW. Fishbach and Hedaya did not immediately respond to requests for comment.