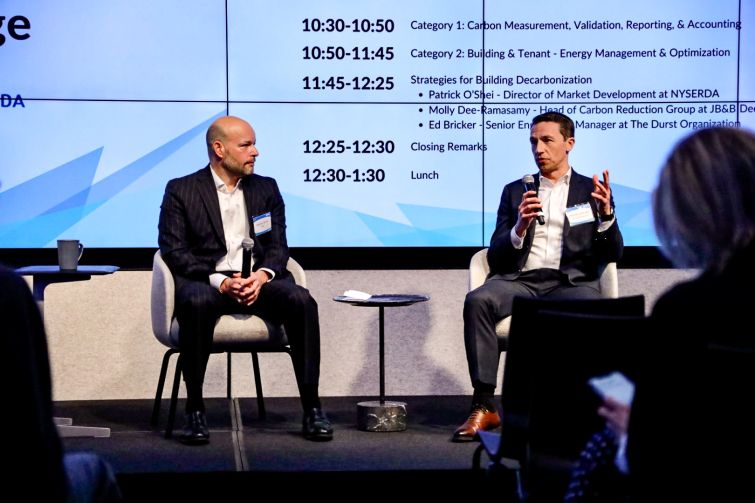 Brookfield Properties’ Michael Daschle and RXR’s Michael Aisner opened discussions at REBNY's 2022 PropTech Challenge by explaining the first step for landlords is to install technology that will help them track how energy resources are being used, pinpoint inefficiencies, and adjust as needed. Photo: REBNY

Buildings bereft of workers and residents at the height of the pandemic taught landlords a hard lesson — their assets would keep swilling energy resources unless the infrastructure was modernized.

Achieving a carbon net-zero footprint in buildings was at the center of the Real Estate Board of New York’s 2022 PropTech Challenge, now in its fifth year and which was co-sponsored by Commercial Observer. Much of the technology on offer was not new, but pending regulations in New York City and COVID-19 appeared to give them added urgency.

The finalists in four different categories were announced on April 19 in an event which narrowed the field from 60 submissions to 13 which were recognized for innovative and practical concepts for zero-emissions buildings.

Commercial Observer’s editor-in-chief, Max Gross, was among 13 of the judges.

Brookfield Properties’ Michael Daschle and RXR’s Michael Aisner opened discussions by explaining the first step for landlords is to install technology that will help them track how energy resources are being used, pinpoint inefficiencies, and adjust as needed.

Many of the submissions to the PropTech Challenge impressed Sandy Jacolow, chief technology officer for Empire State Realty Trust. The submissions have the potential to not only help the environment and landlord’s bottom line, but to protect relationships between landlords and tenants through automation, Jacolow said.

The technology presented last week aims to give tenants more control over heating and cooling while providing a healthier atmosphere indoors. They’re also designed to allow landlords to cut costs.

“It really is about the landlord and the tenant coming together to address these issues that became so apparent during COVID where occupancy was down 15 to 20 percent; the utility costs were only down 70 percent,” Jacolow told Commercial Observer. “I think what you’re starting to see is products like ClearTrace, products like ​​Prescriptive Data, where they give you insight into what’s going on and they allow you to sit down and make actionable items to solve a problem.”

New York City’s Local Law 97, enacted in 2019 and set to take effect in 2024, loomed over this year’s event. The rules require that buildings spanning 25,000 square feet or larger reduce their carbon emissions by 40 percent by 2030, and by 80 percent by 2050, as high-rises produce about 80 percent of the city’s greenhouse gas emissions.

That covers about 50,000 buildings and nearly 60 percent of the city’s building area, Commercial Observer previously reported.

That’s where these companies come in; awards were given in four categories and the finalists all made presentations about their work.

ClearTrace CEO Lincoln Payton said that his company’s dashboard has helped buildings, including One Manhattan West, reach zero emissions. This digital system takes measurements from gas and electric meters on every floor to deliver real-time data.

Measurabl’s senior vice president of customer success, Aaron Barranco, was also honored in the first category for that company’s software platform, which allows building owners to customize the kind of data gathered.

Hatch Data’s COO, Ben Mendelson, and Vivek Ghosh, the firm’s director of product, serves clients such as Boston Properties and Hines with technology that analyzes data that’s already been gathered at their properties through other management systems and offers recommendations.

The technology presented by Alexander Suma, CEO of IBIS Power, offers a way to cool rooftop solar panels by pairing them with wind turbines through the PowerNEST system for taller buildings. The PowerNEST can produce up to 10 times as much energy this way.

Sonu Panda, CEO of Prescriptive Data, said the concept for his technology, still in the early stages of development, revolves around making tenants responsible for the energy they use through tracking data for individual spaces. (He also quipped that if he knew he was going to see Payton that day he “would have gotten a haircut.”)

The Cozy isn’t just for beer cans anymore. Matthew Isaacs from Radiator Labs pitched a cover that goes over century-old cast iron heating units to gather information on which ones are overheating, underheating and controlling how much heat escapes from the device, formally known as the Cozy.

The presentations on the five companies were followed by a panel discussion on strategies for building decarbonization with the senior engineering manager at the Durst Organization, Ed Bricker; the director of JB&B Deep Carbon Reduction Group, Molly Dee-Ramasamy; and Patrick O’Shei, the director of market development for New York State Energy Research and Development Authority (NYSERDA). The panel was moderated by Zach Steinberg, a senior vice president at REBNY.

Paul Rode, head of U.S. engineering at Tishman Speyer, spoke about how the international firm that oversees tens of millions of square feet has worked to implement energy refits.

Brightcore Energy’s Dave Hermantin overviewed drilling technology that will harness geothermal forces to both heat and cool buildings as part of the third category. Borehole thermal energy storage could be up to 65 percent more efficient during the heating season than conventional methods,” Hermantin said.

Erin Garrity from Trane also spoke to the merits of thermal energy storage, noting it is best done by using tanks of ice in the basements of office buildings to cool them in the height of summer, with an ice plant already in use at the SL Green Realty Corp.-owned 11 Madison Avenue.

Ron MacDonald, CEO of Zinc8 Energy Solutions, presented the Zinc-air Energy Storage System, a battery that uses zinc and can run for days at a time, and, unlike lithium, does not weaken. MacDonald said all materials could be harvested in North America.

CarbonQuest captures emissions from boilers and converts them into liquid carbon dioxide (CO2) and sells it to concrete block manufacturers. A multifamily building at 1930 Broadway already uses this tech, which would tackle the fact that buildings in New York City account for about 80 percent of its carbon emissions, Brian Asparro, COO of CarbonQuest, said.

Construction Carbon Founder ​​Tom Scott offered a scorecard for raw material manufacturers so developers can make informed decisions about how green a building really is. Carbon-neutral steel mills and glass factories will contribute to a better score for a finished building.

Soletair Power turns buildings into “CO2 capturing machines,” CEO Petri Laakso said. It does this by integrating with a building’s HVAC system and could capture 6,550 tons of CO2 per day if deployed on a wide scale in a city like Tokyo.