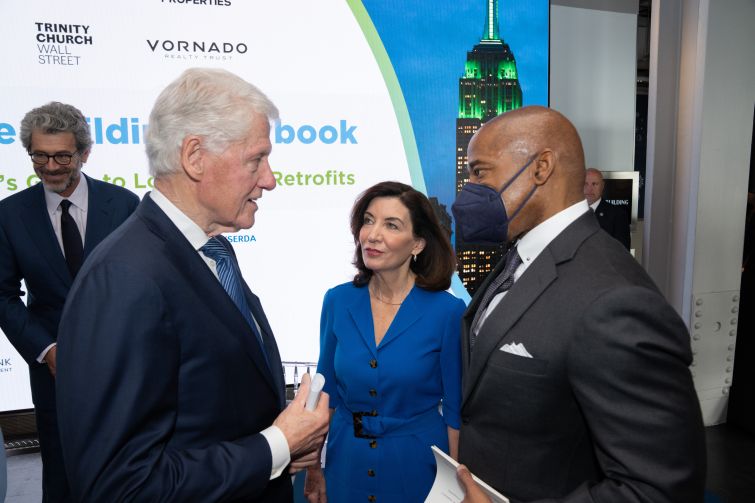 A public-private partnership is throwing the book at climate change, but a treatise for reducing carbon emissions had to be written first.

“It maps out where owners can make the shift to electric in lieu of fossil fuels and when it is logical in consideration of the embodied carbon systems with remaining life to make that shift,” Anthony Malkin, CEO of Empire State Building owner Empire State Realty Trust, said during the Thursday announcement about the manual. “It demonstrates the significant carbon reduction goals, which can be achieved with returns on investment.”

The announcement of “The Empire Building Playbook: An Owner’s Guide to Low Carbon Retrofits” attracted Gov. Kathy Hochul, Mayor Eric Adams and former President Bill Clinton who expressed high praise — and high hopes — for the potential of the how-to.

“Every year, there’s some report where somebody is wringing their hands saying we’re not moving fast enough and calamitous consequences will ensue if we don’t do x, y, z … we’re running out of time,” Clinton said at the podium. “This is the culmination of years of effort. It’s hard to sell something in politics that takes years to catch on. It’s hard to sell something with a lot of moving parts. But when you’ve got it in a little book … it ought to be easy.”

Aside from the Empire State Building, each of the landlords involved in the guidebook used examples from one building in their portfolio to identify ways to retrofit high-rise buildings that could be adopted by other property owners. Key takeaways include how to reduce, recycle and store heat in towers, reducing peak power consumption and other small investments owners can make over time for carbon reduction before Local Law 97 starts to take effect in 2024.

“It’s about the economy and how we can also have a clean energy future that creates jobs and opportunities for people,” Hochul said in her remarks. “When we convert — I won’t say ‘if’ — when we convert all buildings here in the city of New York to follow this playbook it will have an economic impact of $20 billion while creating 100,000 jobs.”

The guidebook — which was funded through a $50 million grant from the state — comes as landlords across the city are gearing up for the rollout of Local Law 97. The groundbreaking legislation, signed into law by former Mayor Bill de Blasio, will require that buildings spanning 25,000 square feet or larger reduce their carbon emissions by 40 percent by 2030 and by 80 percent by 2050.

“We know that climate catastrophe isn’t some far-off threat — we must end the era of fossil fuel, but in order to reach this goal, we must work with our largest emitters of carbon: our buildings,” Adams said in a statement. “By retrofitting and decarbonizing our buildings, we can invest in our planet’s health and our people’s health, improving air quality and creating good-paying jobs for New Yorkers.”