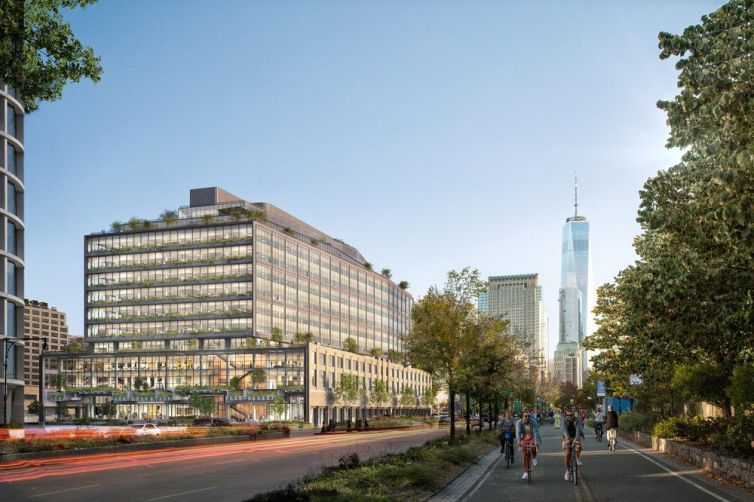 A rendering of the future Google hub at 550 Washington Street. Rendering: Google

Nobody’s saying that there were no blockbuster, billion-dollar real estate deals over the last year. (**Cough** Blackstone! **Cough, cough.**) But, since March of 2020, New York’s office stock seemed to be sadly left out of the mix.

Yes, One Vanderbilt signed incredible leases. But a lease (even an amazing, record-setting one) is a different animal than a sale. Manhattan was once dotted with seemingly effortless billion-dollar-plus office trades. It was the safest, most prudent investment that could be made. There was only so much Manhattan. It was the real estate equivalent of the catechism.

Last week, Google proved that it is still possible.

Google executed on its option to buy St. John’s Terminal in Hudson Square for $2.1 billion.

This was not exactly a surprise for those who had been following Google’s real estate moves in Manhattan. They had been building up the area for a long time and they have the cash to make a big real estate purchase without even feeling it.

“Google is very deliberate about their real estate decisions, and I think they were extremely committed to the building,” said Dean Shapiro, head of U.S. development for Oxford, the developer of the project, just after Google’s chief financial officer announced the St. John’s deal. “They worked very closely with us; they bought into the design; it’s going to be completely on target with what they’re trying to do in terms of the workplace. So it’s not surprising to us that they chose to add this as a permanent fixture in their real estate portfolio.”

Not to be outdone, a joint venture of Hines and the National Pension Service of Korea are putting $2.5 billion behind the purchase and redevelopment of the Pacific Gas and Electric Company’s San Francisco campus. The purchase from PG&E was $800 million, but the JV is also putting another $1.7 billion into a complete redevelopment that will include two offices and a multifamily property.

Perhaps both deals are being guided by the idea that office just has to settle in for a long slog. But the precautions, the rules and everything else will eventually be normalized.

The light from these two mega-deals shouldn’t dim the brightness of other, non-billion-dollar office deals. Mack-Cali sold Jersey City’s 101 Hudson Street to The Birch Group for a whopping $380 million, nothing to sneeze at.

And, in the world of multifamily, there’s plenty of activity. Despite opposition, the Champlain Towers South site in Surfside, Fla., will hit the market and likely be sold next spring, with a starting price of $120 million. Delshah Capital smells money in Downtown Brooklyn and put its mixed-use multifamily development on the market. And, in Long Island City, Vorea Group, Domain Companies and L+M Development Partners closed on a $88 million parcel.

There was even some movement in retail: In the nation’s capital, WashREIT sold off eight retail properties for $168 million. (The buyer was not disclosed.)

No knock on leases

Liakas Law took 13,445 square feet at the Trump Organization’s 40 Wall Street. (And we heard that former President Trump might be in need of legal representation, so that could work out for everybody!)

In retail, we learned that Apple opened its first store in the Bronx at the Mall at Bay Plaza on the same day it announced the release of the iPhone 13. And Newmark reported six new fitness leases. (We’re happy to see the activity. Honestly, a lot of retailers are in between a rock and a hard place these days. With vaccine mandates in effect, they’re responsible for patrolling for fakes and it has been tough, especially for restaurateurs.)

In Washington, D.C., REEF Technology, a Miami-based company that offers logistics and storage support to ghost kitchens, nabbed 63,749 square feet of industrial space at the Gorman Center at Savage Mill.

Procore, the construction management company, put up $500 million to buy Levelset, a proptech company that makes software that eases the path of filing lien payments on construction projects.

And the common average Joe investor will have a chance to buy that elusive WeWork stock as early as next month. BowX Acquisition Corp., a special purpose acquisition company, filed a proxy statement with the coworking company to take it public in a $9 billion deal slated for October.

For us, we’re just waiting to see what happens when WeWork competitor Industrious decides to go public. (Sometime next year, according to CEO Jamie Hodari’s interview with CO.)

Did you know that there was $70 billion in investment in life sciences companies in 2020? That’s according to a new Cushman & Wakefield report, and it’s one of the reasons why life sciences is one of the more interesting sectors in real estate today.

San Diego has long been a hub of genome research and, at 18 million square feet and counting, it’s long been in league with San Francisco in terms of demand and investment for life sciences.

The East Coast is no slouch, either! The Amtrak corridor acts as an enormous biotech hub with best-in-the-world universities like Harvard, MIT, and Yale churning out great minds to make Boston and New Haven serious life sciences players, and New Jersey hosting pharmaceutical brands like Bristol Myers Squibb.

New York has long been providing the capital to make it all work; the capital, and a lot of life sciences support like BioLabs@NYULangone, a biotech coworking facility that serves as an incubator for life sciences startups. CO spoke to its director, Dr. Glennis Mehra, this week.

All of which is a very roundabout way of saying that we think there’s a lot of life sciences activity happening and it’s why we established a monthly newsletter, which we would encourage one and all to sign up for.