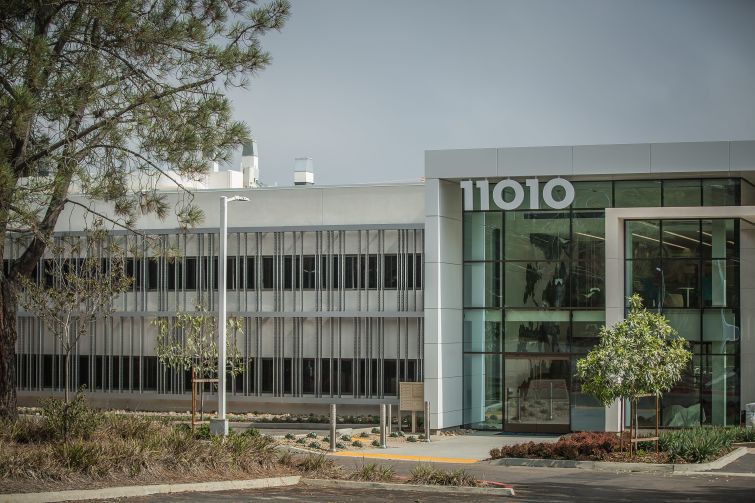 BioMed Realty’s new AURA building in San Diego’s Torrey Pines Mesa is fully leased to Foundation Medicine. The Cambridge, Mass.-based company had planned to take most of the 82,000-square-foot property, but instead took all of it. The move is an example of how the life sciences properties of institutional owners like BioMed allow for tenant growth. Photo: BioMed Realty

Three regions always crown lists of the top life sciences markets in the United States — Boston, San Francisco and San Diego — and usually in that order.

The first two make sense on a gut level. The Boston area claims dozens of universities and colleges, including ones with top-shelf science programs, and major health care companies. The San Francisco area encompasses the nation’s main technology hub, Silicon Valley, and it’s not that big a mental nor practical leap from technology to biotechnology.

But, San Diego’s vacancy rate of 4.9 percent is lower than both — much lower, in fact, than Boston’s 7 percent — and, for that matter, much lower than the next region on Newmark’s midyear rundown, North Carolina’s Research Triangle, where the vacancy rate in a life sciences market roughly half the size of San Diego’s was 9.3 percent.

Strong job growth and funding are driving these statistics, as is a long history of success. Life sciences companies secured more than $4.9 billion in venture capital funding in the nine months ending June 30, according to brokerage JLL. The $2.025 billion total for the fourth quarter of 2020 was nearly four times the total in the third quarter, and well ahead of any quarter going back to at least 2015.

“There are probably more jobs than job seekers locally,” said On Amir, a professor at the Rady School of Management at the University of California-San Diego, whose areas of expertise include the biotech industry. “So, I’ve seen a lot of companies recruiting from beyond the area.”

These conditions have created one of the nation’s top commercial real estate markets for life sciences developers and brokers. They report consistent competition for new space and no real signs of a slowdown in the next few years.

“On the demand side of things, I can say activity in San Diego is the healthiest we’ve experienced in several of the past cycles,” said Jon Bergschneider, president of West Coast markets for BioMed Realty.

He has been working in San Diego life sciences real estate since 2000, and BioMed has invested $2.5 billion in the market. It controls some 3 million square feet of life sciences space, with another 2 million under development.

Blackstone-owned BioMed, along with the real estate investment trusts Healthpeak Properties and Alexandria Real Estate Equities, own two-thirds of the leasable life sciences space in San Diego’s major submarkets for the industry, according to Grant Schoneman, a senior managing director at brokerage JLL, who has been working on both the landlord and tenant sides of San Diego’s life sciences market since 2007.

These large, institutional players and others like them enjoy the advantage of having spaces that not only cater to the many types of companies that comprise “life sciences” — including pharmaceutical, medical, telemedical and biotechnology ones — but also to the many stages of these companies, from startup on.

“I’ve never been busier than the last 18 months,” Schoneman said. “Life sciences is one of the core food groups right now, and, really, in San Diego, is more institutionalized.”

The past year and a half has indeed been a period of sharp growth in the region’s life sciences market and has highlighted in bright yellow what makes it tick in the first place. San Diego might lack Boston’s surfeit of schools and hospitals and San Francisco’s stronger connection to tech. But it makes up for it.

There is a history of life sciences in San Diego. Jonas Salk, who developed the first widely used polio vaccine, introduced in 1955, chose San Diego to build his eponymous institute (he was born and educated in New York City). There are also Scripps Research and the Sanford Burnham Prebys Medical Discovery Institute, as well as UC-San Diego. Each feeds workers and ideas into the market.

Then, there is San Diego’s dominance of one of the key industry drivers: the sequencing of genomes, which has helped spur innovations in everything from livestock breeding to disease treatments to those nifty ancestry-tracing kits. An estimated 80 percent of such sequencing worldwide is done by machines that San Diego-based Illumina manufactures. Other areas in particular that drive the San Diego life sciences industry include research and development in oncology, therapeutics and diagnostics.

Finally, there’s the fact that nothing succeeds like success.

“San Diego has been a life sciences hub long enough that there are a number of executives here who are on their third, fourth or fifth company,” Schoneman said. “They’re highly experienced, they know how to raise capital, they know how to develop a company around certain technologies.”

This environment has put owners and operators of life sciences space in a commanding position. In 2020 and early 2021, basically every measure of the market bent in their favor. Tenants in San Diego proper took a record 2.2 million square feet-plus in 2020 through 92 leasing deals, according to JLL. In the first half of this year, they took another nearly 1.7 million feet through 70 deals — 133 percent higher than the five-year leasing average.

Rents, too, remain healthy from an ownership perspective. Average rates for biotech space were up 22 percent over the 12 months ending June 30. Depending on the submarket, the average rates for life sciences space in general run from in the mid-$4s per square foot on a triple-net lease basis to more than $6 — nearly double what they ran seven years ago. New space that’s supposed to be delivered from 2023 through 2025 is already asking rates of nearly $7 a foot, JLL research shows.

The same major submarkets, such as Torrey Pines, University Town Center/Campus Point, Sorrento Mesa and Sorrento Valley within San Diego proper, continue to draw the most development and tenant demand. Observers say that could change as companies continue to absorb existing, and even planned, space. (And there’s a lot of planned space: 10.9 percent of San Diego-area life sciences inventory was under development as of the second quarter, according to JLL.)

The nature of that development could change, too. Like in other major life sciences markets, San Diego’s labs, research and development space, etc., is generally lateral and low-slung; as areas fill in, more new projects could build up rather than out.

In the meantime, it’s a commercial real estate niche that decidedly favors owners and operators (and their investors and brokers). Life sciences developers do not need to incentivize leasing, either, as those building property for more conventional office-using tenants have had to do amid the pandemic’s emptying of space.

Only two challenges might derail this gravy train. One is San Diego’s housing costs. Like in a lot of California, the market for homes is increasingly pricier and competitive — the median sale price was $765,000 in August, a 10.1 percent annual increase, and half of those homes spent only 12 days on the market, down 20 percent from August 2020, according to real estate site Redfin.

Such stats might drive potential life sciences workers and entrepreneurs to seek roots elsewhere. Or maybe not. San Diego’s Regional Economic Development Corporation pegged the average wages in the field at more than $107,000 per worker in 2019, before the pandemic-spurred boom.

The other challenge is also one that might not seem that daunting. The sheer popularity of San Diego as a national life sciences gateway, along with Boston and San Francisco, could lead to such development infill that there’s little space left to compete over. Even there, though, companies might simply push to the city’s margins and then out into surrounding San Diego County. The investment and the activity will still stay local.

That infill is years off, though. For now, it’s a land rush.