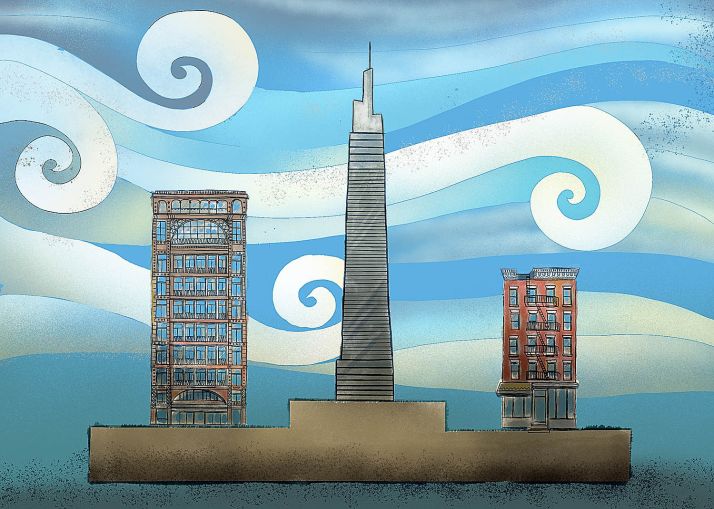 In September 2020, as coronavirus cases surged in New York City and vaccines seemed especially far off, SL Green Realty Corp., one of the city’s largest office landlords, opened its hyper-amenitized, technologically forward-looking office tower at One Vanderbilt Avenue across from Grand Central Terminal.

The opening seemed to be more brash statement than sound business move. Nevertheless, SL Green painted it as such. “New construction still draws a lot of interest and still has some pricing power,” SL Green President Andrew Mathias told Commercial Observer at the time.

He was completely right.

The 1,401-foot, 1.7 million-square-foot tower’s topmost floors are now asking more than $300 a square foot in rent, an audacious figure that, if SL Green gets close to it, will be a record taking rent for the city.

The tower was also deemed a sure enough bet to score a $3 billion refinancing in June — the largest fixed-rate, CMBS loan ever secured by a single asset. And One Vanderbilt, which SL Green owns with Hines and the National Pension Service of Korea, was around 90 percent leased as of midyear, a market milestone and one that the commercial real estate industry is hugging like a favorite blanket amid continued fallout from COVID-19.

“Its success demonstrates that there is a flight to quality,” said Stephen Siegel, the veteran broker and executive at brokerage CBRE.

That success also underscores a historic trend in the top U.S. office market. Sleeker, newer office space embodied by the likes of One Vanderbilt is coming to dominate the Manhattan office market in a way not seen in this century, at least.

Rents in new-construction office space in Manhattan increased more than 98 percent from 2000 through the summer of 2020, compared with just over 75 percent growth for Class B, according to brokerage JLL. The average asking rent for Class A space in general — new construction or otherwise — easily outpaced the Class B average during the same 20-year run, starting at $50.10 a square foot versus $35.25 and ending at $86.21 a square foot versus $61.79.

Demand, too, reflects the wide gap. The same JLL statistics show a generally downward slope since 2014 in the annual volume of Class B space leased in Manhattan. Class A’s volume has stayed ahead by many millions of square feet per year: In 2020, tenants leased 11.5 million square feet of Class A versus 3 million of Class B; and, in 2019, 27.4 million feet versus 4.7 million.

Class A space has also weathered the century’s major crises a lot better. Top-shelf space in Midtown — Manhattan’s premier submarket — recovered 85 percent of its value in 36 months following that value’s lowest point during the Great Recession, while the rest of Midtown took 68 months to recover the same amount, according to CBRE (which, incidentally, dispenses with “Class A” and “Class B” in its methodology, and just goes with one set as “better buildings” and the other as “commodity buildings”).

Research from Moody’s Analytics showed higher vacancy rates in Class B and C space going back to at least 2019. This was after years of those classes mirroring the vacancy in Class A. Now, Class A’s vacancy stands about 2 percentage points lower coming out of the pandemic. Class A space, in fact, accounted for some 96 percent of leasing activity in 2020’s third quarter, just before news of successful COVID vaccines broke, according to JLL.

The dominance is happening because, and despite, the pandemic dimming demand for office space — any office space. That’s because older office buildings are increasingly out of style and the better buildings can absorb market shocks in a way that lower-rent properties can’t, including being able to lose money to incentivize tenants to sign.

“The better the building, the more ability the landlord has to trade those concessions for a higher base rent,” said Nicole LaRusso, director of research and analysis for the New York tri-state area at CBRE. “The challenge of a commodity building is not only do you have to put a ton of concessions on the table, you probably can’t push the rent either.”

If non-Class A properties do want to compete, their owners are increasingly compelled to undertake upgrades, if not lengthy gut-renovations, to add the sorts of features needed to attract a range of tenants that now goes well beyond the old axis of banking, Big Law and business services that Manhattan’s office market used to turn on.

“I do think, 100 percent, that every tenant wants something along these lines now, and I think it’s a spectrum of how far do we go as a landlord or a developer to get there,” said Erik Horvat, a managing director and head of real estate at The Olayan Group, which is in the midst of a $300 million-plus renovation of 550 Madison Avenue, a building that went up in the early 1980s and once housed Sony and AT&T.

The 550 Madison makeover, which Olayan expects to wrap in 2022, will include new health and wellness amenities and food and beverage options, as well as an expansive outdoor terrace and the latest in air filtration. These are just the sorts of features that credit tenants want amid a slow return to office that could see most of Manhattan’s office space continuing to lay unoccupied daily heading well past Labor Day.

“If you’re going to bring people to an office, you want that office to be a really compelling place,” LaRusso said. “You also want it to have the best building systems, particularly around ventilation and light and air — all these things that people had a preference for before, they will only become heightened.”

The source of much of the heightened demand for this most modern of office space is another reason for its dominance.

Once upon a time, much of the commercial real estate industry in Manhattan, and a lot of the wider New York-area economy, depended on bankers and lawyers and the companies that serviced both. It was a small club that congregated in relatively small footprints that included Midtown between Eighth and Third avenues and downtown on, and around, Wall Street. All of the other office space and everyone else went for Class B or lower.

That has changed dramatically over the past 30 years. There are more industries vying for the better buildings, and those buildings are much more spread out.

During the same 30-year period, the number of office-using jobs in the technology industry jumped 112 percent, and those in creative fields rose 14 percent. Indeed, that 96 percent leasing share that Class A space commanded in 2020’s third quarter came largely from Facebook’s 730,000-square-foot deal at Vornado Realty Trust’s planned Farley Post Office redevelopment on the west side of Eighth Avenue at 33rd Street. That in itself is an example of how diffuse Class A space has become geographically. Another prime example nearby: Fellow tech goliath Google has turned nearly all of the old warehouse and back-end office area of West Chelsea into a de facto corporate campus.

This has realigned who drives office leasing and usage in Manhattan, a shift that COVID has only — to use an overused verb — accelerated. It’s a much different dynamic than coming out of the recession of 2007 to 2009, the last major crisis to test the office market.

“The tech industry was still recovering from the dot-com bubble; you were still two years away from Google purchasing 111 Eighth Avenue, which really was the beginning of the sort of 2.0 tech boom,” said Franklin Wallach, a senior managing director of research at brokerage Colliers International.

Tech’s brisk ascent since that 2011 purchase of 111 Eighth has helped in picking up the slack in office leasing in a way that finance and law might otherwise have not been able to do. A lot of space came online — think Hudson Yards, swaths of the redeveloped World Trade Center and One Vanderbilt, as well as numerous redevelopments — that otherwise would not have gotten absorbed. So far, tech has helped fill it.

Tech accounted for 54.3 percent of new-construction space leased in Manhattan in 2020, and 40.2 percent of it leased in 2019 — both up from only 12 percent in 2018 — according to JLL. Meanwhile, the two sectors — finance and tech — each claimed roughly one-quarter of leasing activity in 2020 by the end of the third quarter, the vast majority of it in Class A space.

“There isn’t enough brand-new space, regardless of whether someone wants to pay three figures and up, to accommodate all the tenants,” CBRE’s Siegel said.

That might change in the next few years, particularly if companies continue to embrace a hybrid model that has workers coming in only two or three days a week. Manhattan is due to add more than 25 million square feet of office space from 2022 through 2024, according to Colliers. Most of it will be new, Class A space, converted or brand-new.

Things can turn ugly fast when that space doesn’t get used. The Durst Organization and the Port Authority of New York and New Jersey — owners of One World Trade Center — only this month resolved a months-long dispute over millions of dollars in back rent with marquee tenant Condé Nast, the publisher that’s shedding much of its footprint in the tower.

And Hudson Yards, the largest commercial real estate development in modern U.S. history, found itself with a 188,000-square-foot hole to fill after a bankrupt Neiman Marcus closed its store there and developer Related Companies opted instead to market the space as office. It’s still empty.

At the same time, though, a veritable city’s worth of Class B space has disappeared from Manhattan, converted into Class A office or, more likely, into hotels or homes. This was particularly true in Lower Manhattan, where 13.8 million Class B square feet changed into something else in the 19 years after 9/11, according to statistics from booster group the Alliance for Downtown New York.

Most was never replaced — one market analyst that Commercial Observer talked to struggled to recall any new Class B buildings in recent years — providing a bounce to surviving Class B space in terms of lower vacancy and steadier rents. Otherwise, it was all Class A or “better,” all the way. It’s almost an end-of-history moment for the Manhattan office market as owners and developers shift to more modern and amenitized space to draw the wider tenant base looking for it.

That’s what Brookfield Properties is doing at 660 Fifth Avenue, the 41-story office tower it acquired the ground lease for in 2018 for $1.3 billion. Brookfield’s $400 million in work is expected to transform the bulky building constructed in the late 1950s into a contemporary office address, complete with new air filtration; greenery-infused terraces; and fresh, 11-foot-by-19-foot glass panels to flood floor plates of up to 75,000 square feet with natural light. The building is expected to reopen in 2022.

“We looked at this as a redevelopment opportunity similar to what we did at 5 Manhattan West,” Callie Haines, head of Brookfield’s New York and Boston regions, said, referring to the formerly Brutalist building on far West 33rd Street that the developer revamped last decade, including cladding it in glass, and that afterward drew Amazon and JPMorgan Chase as tenants. “So, we took an old, dated office building, not a lot of light and air, [and] completely reconceived it into a building that Class A tenants are excited to be a part of.”