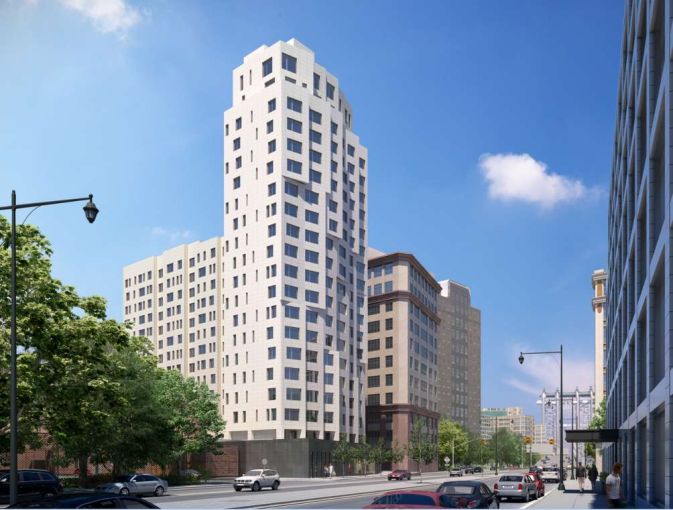 Delshah Capital and partner Start Treatment and Recovery Centers have put a nearly completed, mixed-use, rental housing development in Downtown Brooklyn on the market, without an established asking price, according to information from JLL, which is marketing the sale of the project on behalf of the owners.

The 180-unit development is located at 22 Chapel Street in the ever-burgeoning area of Downtown Brooklyn, which has been experiencing a relative explosion of fresh housing product in the neighborhood over the last several months. It was the first ground-up development in Brooklyn pursued by Delshah, and has been co-developed by OTL Enterprises, as CO previously reported.

Delshah’s project, which is located within a designated Opportunity Zone and benefits from tax incentives as part of New York’s 421a affordable housing program, is expected to receive its first temporary certificate of occupancy (TCO) in the fourth quarter. The timeline for the completion of the development is expected to be in the first quarter of 2022, according to JLL, which said that 22 Chapel Street will “offer strong initial cash flow on lease-up and a substantial…tax benefit that will significantly offset property taxes for the next 35 years.”

The JLL Capital Markets team that is tackling the sale is led by the Chairman of New York Investment Sales, Bob Knakal, who is working alongside Stephen Palmese, Hall Oster, Jeffrey Julien, Rob Hinckley, Ethan Stanton, Patrick Madigan and Braedon Gait. Max Herzog and Mark Fisher, also of JLL, are advising on the financing.

“22 Chapel Street is a great opportunity to acquire an affordable New York tower at the intersection of DUMBO, Brooklyn Heights, Fort Greene and Downtown Brooklyn,” Oster said. “The rapid recovery in the rental market over the past 10 to 12 months will drive leasing demand and future rent growth.”

The asset, which fronts both Cathedral Place and Flatbush Avenue Extension, can be delivered to a prospective opportunity fund investor prior to being issued its first TCO, which JLL claimed would provide the buyer with “the full benefits of the Opportunity Zone investment without the traditional development risk.”

“The property is a rare offering for Opportunity Zone investors seeking a fully amenitized, luxury rental asset with a 35-year tax abatement [and no] development risk,” Palmese said.

There will be 125 market-rate and 55 affordable units within the building, which will also have nearly 1,700 square feet of retail space, a 12,400-square-foot community facility, and 88 parking spots within a garage with an attendant. The layout of the apartments will include studios and one- and two-bedroom floorplans.

The development — designed by CetraRuddy Architecture — will sport a “communal” rooftop, as well as public and private terraces, a lounge and library area, coworking space, a multi-purpose room with a kitchen, a fitness center, a yoga room, a children’s play area, and bicycle and basement storage space.

In January 2019, in order to nab the land on which the project would sit and subsequently begin construction, Delshah formed a joint venture with the nonprofit Start, and it secured about $103 million in debt from Bank OZK and EverWest Real Estate Partners, with the former providing a $62 million senior loan and the latter contributing $40.5 million in mezzanine debt, as CO previously reported.

At that time, CO reported that Start — the original land owner — contributed the land for the project as part of the joint venture and would be housed in the planned community space, but a representative of JLL said that Start would not be occupying any space within the development for an addiction treatment center.

Delshah Capital Founder and Managing Partner Michael Shah did not immediately respond to an inquiry prior to publication.

Mack Burke can be reached at mburke@commercialosberver.com.