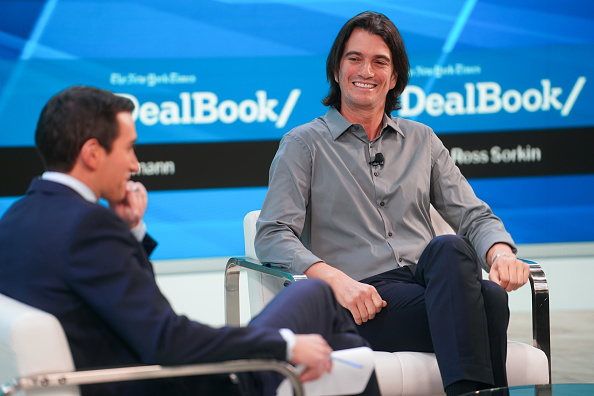 One would think that after Adam Neumann’s spectacular flameout at WeWork that he would be content to lay low for a while and count his millions. (Yes, Neumann, you got a golden parachute!) Well, if you thought that then clearly you don’t know Neumann.

This week it was revealed (first by The Wall Street Journal) that the co-founder of WeWork is putting about $1 billion into multifamily buys around the country, in places like Miami, Atlanta and Nashville.

We have to give Neumann credit for one thing — he did exceptionally well when the market was good. And maybe that’s what he senses is going on now.

Because one could easily forget all about work-from-home, omicron, and everything else pandemic-related if one just focused on New York’s leasing.

The big daddy of the week was the announcement that Morgan Stanley is taking 400,000 square feet at Fisher Brothers’ Park Avenue Plaza, at 55 East 52nd Street. Now, that’s the way to begin a new year!

But there were several other monster deals too. Touro College announced that it was taking a massive 243,000 square feet for a new campus in … Times Square? (An unusual locale, perhaps, for a university.) The school has leased the third through ninth floors (with pieces of the first and second) at Rudin Management’s 3 Times Square. (At least the students will definitely get real-time lessons in commercialism, live performance, popular culture, chain retail, aggressive sales tactics and naked cowboys.)

Signature Bank added a whopping 168,310 square feet to its existing footprint at Empire State Realty Trust’s 1400 Broadway, bringing its total presence up to 280,182 square feet in the building.

But even without the 100,000-plus-square-foot whales, there was a ton of other leasing activity: Global Holdings inked two new tenants (fintech firm Ridgeline Apps and communications firm APCO Worldwide) and renewed and expanded two more (law firm Gunderson Dettmer Stough Villeneuve Franklin & Hachigian and data security firm Varonis Systems) at 1250 Broadway for a total of 75,000 square feet of leases.

Over at 817 Broadway the venture capita firm Union Square Ventures landed a 13,500-square-foot lease. The law firm Glenn Agre Bergman & Fuentes signed a 27,230-square-foot lease at SL Green Realty Corp.’s 1185 Avenue of the Americas. And it wasn’t just offices that were moving, either; Sprüth Magers, the contemporary art gallery with outposts in London, Berlin and Los Angeles inked a lease for 2,234 square feet at 22 East 80th Street.

Speaking of Adam Neumann, WeWork held on to a pretty sweet member this week: Current, a mobile banking app provider, took an additional 29,000 square feet at a WeWork location at 620 Avenue of the Americas.

One can raise one’s glass to all this activity. And take the drink home with you. Because that was one of the new (or, actually, revived) initiatives that New York Gov. Kathy Hochul mentioned in her State of the State address this week, along with proposals for an Interborough Rapid Express, lifting state-imposed caps on residential density and revamping the 421a tax incentive for development.

As for leasing outside New York?

Well, we were definitely bowled over (in a bad way) when we learned that a quarter of all office space was available to lease in Los Angeles as of the start of 2022.

That was per a new report from Savills, which said that L.A. added about 2.4 million square feet of empty offices to its inventory last year. And the market saw 34 percent less leasing in 2021 than it saw in 2019. While certain parts of the city like Burbank are only 10 percent empty, other areas like Miracle Mile and Playa Vista are more than 30 percent vacant.

But, if we take office out of the equation, huge deals are still happening in L.A.

SoCal industrial is, to repeat a cliché, on fire. Like, a five-alarm fire … or at least three. Walton Street Capital paid $70 million for a 182,620-square-foot warehouse in the Inland Empire (alarm one). A fully leased industrial park in San Gabriel Valley just traded for $108 million (alarm two). And Rexford just spent $270 million on eight properties (alarm three).

Plus, multifamily deals are still pulling in high eight figures, like West Covina’s 200-unit Twelve31 Apartments, which sold to investor Ron Nasch for $80.4 million, about $37 million more than the seller, Benedict Canyon Equities, purchased it for back in 2016.

Say hello to my little deal!

The two-story Miami Beach spot at 728 Ocean Drive — the site of the infamous scene where Al Pacino’s friend Angel gets dismembered via chainsaw in “Scarface” and is now the home of a far less offensive CVS pharmacy — was sold for $30.9 million.

But that’s peanuts in comparison to Starwood’s sale of Westland Mall for $149.4 million to Centennial Real Estate Acquisition, which is more than any retail deal inked in Miami last year.

But this isn’t to say that Starwood is done with Miami; on Thursday the real estate investment trust picked up the Standard Hotel in Miami Beach for $62 million.

And Starwood isn’t the only national real estate outfit buying and selling in South Florida; L.A. private investor Chaim Freeman scooped up Beach Place, a seven-acre, 308-unit apartment complex at 17101 North Bay Road from Jamestown for $110.6 million. (Jamestown is happy. According to property records, this is three times what it paid for the complex back in 2009.)

Turning to our nation’s capital

One could have almost forgotten that this week served as a grim milestone (the one-year anniversary of the storming of the U.S. Capitol) in the flurry of activity going on in Washington, D.C.

Lincoln Property and Cadillac Fairview spent $82 million picking up the office that housed the Department of Homeland Security, which they’re planning on converting into apartments.

Finally, Thor is spending $42 million on West Gude Labs, three office and flex space properties in Rockville, Md., which the company is planning on converting into life sciences space.

While you’re ensconced in your domicile this Sunday there’s plenty to think about in the still young 2022.

For your Sunday reads may we suggest three things:

First, lenders are expecting continued growth in 2022 … along with some attrition of the weaker office properties.

Second, remember all those billions of dollars VCs poured into proptech in 2021? This is what they’re spending that on.