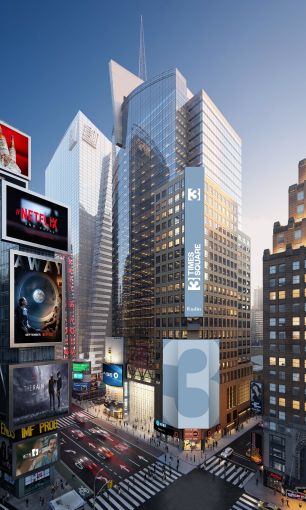 A rendering of the renovation for 3 Times Square. Rendering: FXCollaborative

The college will take the entire third through ninth floors, along with portions of the first and second floors, of the building between West 42nd and West 43rd streets. Asking rent in the 32-year lease wasn’t disclosed, however, asking rent in the building ranges from the low-$70s to mid-$80s per square foot, according to the New York Post, which first reported the deal.

The new campus will include classrooms, science and technology labs, a library, offices, event space, student lounges and cafés, along with a dedicated lobby and entrance for Touro on West 43rd Street.

Several of Touro’s undergraduate and graduate schools will be based at this location, including its schools of business, education, social work, technology and Jewish studies, along with its pharmacy school.

“We are thrilled to partner with Touro College to develop a modern, 21st-century learning environment that supports their growth in the city’s most exciting and visible location: Times Square,” Michael Rudin, an executive vice president at Rudin Management, said in a statement.

Rosengarten told the Post that the university had been searching for a main campus building for nearly a decade. The new space allows it to consolidate three locations on West 31st, West 40th and West 125th streets under one roof.

The 30-story, 850,000-square-foot building in Times Square was originally constructed for Thomson Reuters in 2001 and still has about 500,000 square feet available after a number of tenants decided to move out, the Post reported.