"There are going to be the haves and the have nots and weaker office buildings are going to die at a faster rate." 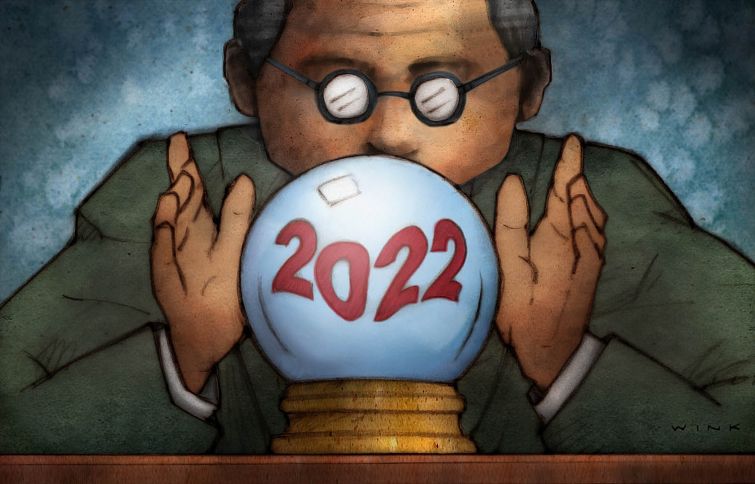 Commercial real estate lending has signs of momentum to set it up for continued lending growth in 2022. Illustration: david wink for commercial observer

After commercial real estate lending volume rebounded from a challenging 2020, the number of deals is poised to soar further this year in a higher interest-rate climate, according to industry experts with whom Commercial Observer spoke as 2021 drew to a close.

Total CRE debt from commercial banks grew by $116 billion as of Dec. 1, 2021, compared with 2020, when the market was largely stalled during the height of the COVID-19 pandemic, according to numbers from data analytics firm Cred iQ. Private label securitization also spiked in 2021, to $159 billion, from $63 billion in 2020, with Cred iQ estimating a slight increase to $161 billion for 2022.

ACORE Capital co-Founder Warren de Haan predicts plenty of tailwinds behind CRE lending in 2022, assuming the omicron variant proves to be only a short-term bump in the road and given the high transaction volume on the investment sales side in 2021. His firm is planning to increase its lending activities to around $10 billion in 2022 from $7 billion in 2021, and expects there to be increased deal activity across the board from non-banking platforms.

“I expect 2022 to be a banner year on the investment sales side, and for us on the lending side I think it’s also going to be a banner year,” de Haan said. “The banks continue to deal with regulatory pressures, and the debt funds — like ourselves — I think will enjoy a bigger share of the market.”

De Haan noted that there is now a record amount of capital dedicated to CRE from private equity, pension funds and foreign investments. Plenty of capital was raised at the start of the pandemic, seeking distressed opportunities that in most cases never materialized, according to de Haan, which he said means more money than ever is sitting on the sidelines waiting to be invested.

A CBRE outlook for 2022 forecasts elevated loan origination volume through 2022 as borrowers seek to lock in lower rates ahead of the Federal Reserve’s expected monetary tightening policy. Issuance for commercial mortgage-backed securities (CMBS) should remain high this year due to investor appetite for higher yields if the Fed tapering of its asset purchases is conducted in a way that doesn’t disrupt the credit markets, according to CBRE.

The Fed is projected to raise interest rates three times in 2022 to confront rising inflation, a move that could prompt banks to become more aggressive on loans in order to boost net interest margins. De Haan cautioned, though, that lenders will need to be cognizant of the potential for those rising interest rates to negatively affect cap rates, which could bring down the value of certain properties.

“Generally, as lenders, we build in a lot of cushion into our underwriting to take into account rising interest rates,” de Haan said. “We’re all sort of wired to be a little bit more conservative than the equity folks.”

Around 80 percent of ACORE’s lending activity centers around acquisition financing, according to de Haan, which he said will present plenty of opportunities in 2022 across a number of sectors. Karen Ramos, head of real estate loan syndications for the Americas at Crédit Agricole CIB, agreed that 2022 lending issuance should see year-over-year growth that should match or even exceed pre-pandemic levels — driven largely by borrowers seeking repricings at lower margins from refinancings executed in 2020. Ramos also noted that there is high demand for acquisitions from real estate investment trusts, private companies and investment funds to shore up balance sheets, along with “continued pent-up demand” from investors.

Interest rate hikes would push more borrowers to finance deals early in the year at lower rates, Ramos said. Following those hikes, she expects lenders to continue their aggressive strategies with industrial and multifamily deals, and to a lesser extent office deals. Lenders will be more cautious on hotel transactions with higher rates and “very selective on retail,” Ramos said.

Alternative lenders have driven much of the CRE debt markets in the past year and this trend should continue in 2022, according to CBRE, aided by life insurance companies finding value in many multifamily and industrial assets. CBRE forecasts life insurance companies will remain active financiers this year with some also selling off portfolios to private equity firms, which tend to be more aggressive when it comes to yield.

This year could also see an uptick in refinancing deals, especially in the CMBS space. There are a number of deals that were issued 10 years ago at far higher fixed interest rates, following the last financial crisis, that will be up for redemptions.

Alison Coen, senior managing director in Greystone’s CMBS lending group, is anticipating a strong start to the market in 2022 because of low interest rates in the 3.25 to 3.75 percent range. She expects CMBS conduit volume alone to rise around 20 percent this year.

“Maturities from 2012 is somewhat of a built-in floor for conduit production this year, and it will ramp up from there,” Coen said. “While all property types will play a role, industrial and self-storage and multifamily when we can get it, will continue to be in favor.”

CBRE is also expecting another strong year for the multifamily sector — the darling of the commercial real estate world — in 2022, aided largely by having a growing range of debt options at its disposal from traditional lending sources along with debt funds and mortgage real estate investment trusts. The incredibly liquid multifamily debt markets will likely help stabilize and perhaps compress cap rates even when interest rates jump, according to CBRE.

Solomon Garber, a partner in non-banking lending platform Bridgeton Capital, said that he expects record volume in the first half of 2022, before hot multifamily and industrial sectors begin to cool off slightly.

“I think you’re going to see peak insanity with chasing multifamily and industrial; then, at some point, maybe the second half of the year, people start to taper back and say maybe from an equity, debt perspective multifamily and industrial are getting overheated,” said Garber, who prior to joining Bridgeton last October managed national originations for Northeast Bank. “At some point, those have to pull back and something has to give.”

Michael Eglit, head of U.S. originations for Blackstone Real Estate Debt Strategies, is forecasting a “strengthening of real estate fundamentals” in 2022 that will help it build off of $25 billion of global lending volume achieved in 2021. He said in addition to transaction activity growth, Blackstone is finding more capital sources, especially in the long-duration fixed-income space.

“It also wouldn’t surprise us to see an increase in office and retail transaction volume as equity investors get more clarity on the future of those asset classes and in some cases seek higher yield,” Eglit said.

Garber said the office market could take an even bigger hit in 2022, assuming remote working trends remain largely in place even when the pandemic subsides. He said that while Class A buildings in top markets could weather the storm because of holding long-term leases from larger companies, sponsors of smaller assets will face a far more challenging road trying to receive financing for deals.

“The big companies that control all these big markets like the Facebooks and Googles of the world, they are still going to take up space since it is such a small percentage of their overall budget and they want to accommodate different needs for their employees,” Garber said. “There are going to be the haves and the have nots and weaker office buildings are going to die at a faster rate. You will start to hear that narrative more.”

Hospitality will also face continued challenges in 2022, with more sponsors in need of debt than there are lenders willing to issue capital to struggling hotels. Garber noted the severe pain still facing the lodging industry with many hotels still far from pre-pandemic occupancy levels and room rates. That could cause many lenders to lose patience after providing some latitude in 2021.

Bridgeton is looking to fill part of that void with $350 million of financing planned for the first nine months of 2022, in which a large chunk will be dedicated to the hospitality industry. Garber’s platform was launched by hospitality developer Bridgeton Holdings, which owns Walker Hotels in Manhattan and the newly debuted Marram Montauk on Long Island.

ACORE also launched a $1 billion hotel rescue capital fund last February, aimed at aiding certain hotel borrowers that were hit hard by the pandemic. De Haan said the hospitality assets for which he thought there would be opportunities to finance ended up recovering quicker than anticipated. He stressed that omicron, however, has the potential to once again disrupt the industry in early 2022, with canceled bookings that would spur borrowers’ need for that rescue capital.

De Haan, for his part, predicts that lenders will likely continue to show patience with hospitality borrowers as long as they are committed to contributing equity to troubled deals.

“I think to the extent that there is a lot of equity in the deal, to the extent that the borrower has continued to contribute equity into their properties to support them, I think you’ll see lenders play ball,” he said. “If the borrowers decide not to put up any more equity, and fund depleted reserves and things like that, I think you’ll see lenders start to reach the end of their rope.”