New York’s real estate industry could’ve done a lot worse than Adams, a moderate from Queens with a record for supporting new development 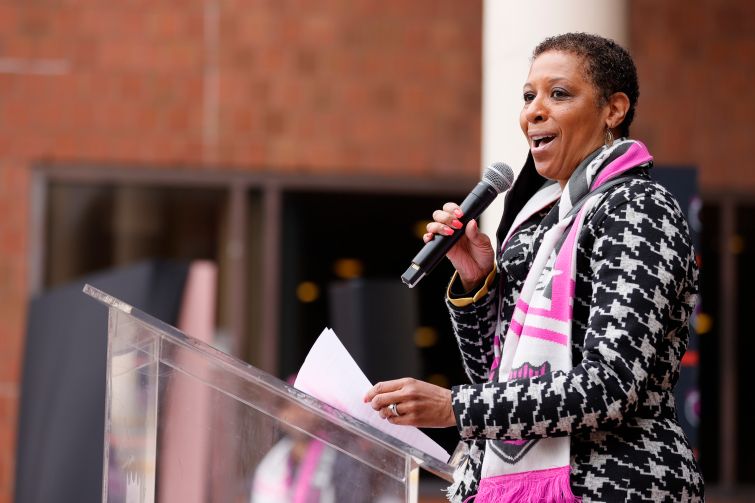 For most of 2021, the race for the city’s second most powerful position had been a bewildering mess that few in the real estate industry would wade into without risk of angering the eventual winner.

As many as eight council members floated candidacies for speaker. By Monday, Dec. 13, though, most of them had dropped out and thrown their support to Adrienne Adams, a Democratic council member from southeast Queens and a former community board chair in the area who was rarely mentioned as a frontrunner and did not have the initial backing of Eric Adams, then the incoming mayor.

Adams, 61, quickly emerged as a consensus candidate for most of the 51-member council as well as organized labor — particularly building and municipal workers — and county Democratic Party heads who played a pivotal role determining the outcome of the race. By the end of the week, her lone rival, Queens Councilmember Francisco Moya, conceded and the speakership was hers.

“She’s been more of an on-the-ground type of person and not a type of political politician pol, who tries to do the right thing,” said one Queens political source with familiarity of Adams’ thought process. “She’s a little surprised she made it by the end, thinking, ‘I won, what?’”

Real estate leaders were relieved with the outcome. The council’s left-wing flank has gained more members in recent years and industry leaders feared a progressive candidate could jam up Mayor Adams’ agenda while risking the city’s recovery. Adrienne Adams was viewed as less ideological and more pragmatic than other candidates.

“We share her goals of supporting a strong and equitable economic recovery, creating good jobs and increasing the production of much-needed housing, including affordable housing,” Jim Whelan, president of the Real Estate Board of New York, said in a statement. “We are committed to working closely with her and the council to advance data-driven, results-oriented policies that move the city’s economic recovery forward.”

She remains in the mayor’s good graces, too, even if she wasn’t his first choice, perhaps because they’ve known each other since they attended Bayside High School together and have stayed friendly. He tweeted his support that she would be the “best choice to lead our City Council forward” on Dec. 17, and the two leaders visited their former stomping grounds a little over a week before they were each expected to take office in January’s earliest days.

Speaker Adams will likely spar with Mayor Adams over the budget and which priorities to address first as the city spirals toward another winter of rising COVID-19 rates and closures. But she’ll lead a historic majority-female council, which could lead to new policies and a different culture in city government.

“There used to be a bro culture at City Hall, but we’ll see a different wave with all women and women who Adams is empowering,” one former Queens official said of the new speaker. “I think we’ll see a better form of leadership emerge.”

Politics would come later. In 2009, Adams started volunteering with Queens Community Board 12, which covers Downtown Jamaica and six other neighborhoods in Southeast Queens. She served as its education chairwoman and represented the board at citywide education events and Department of Education policy meetings.

Three years later, she was selected as the board’s chairwoman, where she served for five years. During that time she developed a close relationship with Queens Democratic County bosses Joe Crowley and Gregory Meeks, the latter who succeeded Crowley in 2019. The party’s leaders fundraised and backed her in an unsuccessful effort to oust Queens Sen. James Sanders in the 2016 Democratic primary. When Queens Democrat Ruben Wills’ Council seat opened up following his 2017 conviction on fraud and larceny charges, Adams secured endorsements from Crowley and Meeks and breezed to victory.

Queens Borough President Donovan Richards, who has known Adams for more than a decade, said she built coalitions and brought stable leadership to one of the city’s more challenging community boards to oversee due to its diverse constituencies.

“She was able to balance the needs of the entire community, and doing that and running for City Council is not easy,” Richards said. “She does not need on-the-job training. She understands nuance and that’s going to be important.”

When she was in the council, Adams led its public safety committee, presiding over a contentious hearing in October over the New York Police Department’s Special Victims Division’s failures to solve rape investigations.

She also developed a reputation as a good listener and fair arbiter on complicated land use disputes. Her support in 2021 for the New York Blood Center’s controversial research tower provided cover for other members to back the plan even though the neighborhood’s councilman opposed it. When her former community board opposed a senior housing project put forward last year, she listened to both sides before arriving at a decision to support the proposal.

“She’s not necessarily looking to win a popularity contest, but serve constituents she was put here to [serve],” Richards said. “At the end of the day, she arrived at a decision to better the lives of her constituents and address community facility space and housing.”

Adams will look to utilize her experience in the corporate world and local government to manage the disparate power centers within City Hall.

So far Adams has signaled she would focus on ramping up testing to contain COVID-19, improving police management while ensuring police have enough resources to tackle gun violence, expediting the city’s economic recovery, and addressing inequities in public schools.

Adams will likely use her new position to pass a number of priorities for outer-borough residents too. She pledged she would help taxi drivers drowning in debt from predatory loans and expand free legal services to immigrants.

She has also been lobbying the state to award a full casino license to Genting Group’s Resorts World that would allow live card games at its South Ozone Park gaming facility.

“Resorts World has contributed mightily to New York’s economy, creating jobs for local residents and spurring economic development in the borough of Queens,” Adams said in a letter she sent to the state gaming commission, the New York Post reported.

“New York City has dealt with an affordability crisis for decades — one that was only worsened by the COVID-19 pandemic,” Adams said in a statement to Commercial Observer. “My hope is to rethink processes to guarantee we’re building truly affordable housing in communities where residents are at risk of being displaced.”

But bringing basement units up to code presents several challenges. If landlords have to spend money to add drainage systems and create new exits, they might raise rents. A pilot program offering landlords financial assistance and relief from regulation has had its budget slashed so fewer than 10 property owners participated, WNYC reported.

Still, real estate leaders are optimistic Adams will bring her openness to development and sustainability honed in the outer boroughs to the rest of the city.

“For us it’s about how do you focus on things to bring the city back in a safe way, improving streetscapes, supporting small businesses, and not penalizing certain businesses over others,” one real estate source said. “We’re hoping she drives the first set of agenda ideas in a way that demonstrates that.”

Before anything, though, Adams faces the pandemic’s fourth wave in a city that has been breaking records for positive cases.

Several other challenges then loom. She’ll have to negotiate with Mayor Adams over the city budget, which ballooned under the de Blasio administration. Before assuming his new role, Mayor Adams’ schools chancellor, David Banks, vowed to slash the Department of Education’s budget, but the political costs of cutting programs and closing schools could fall on council members, who will face voters again in 18 months.

Speaker Adams’ biggest hurdle will be maintaining the independence of the council while partnering with the mayor on key issues. But her constituents within the council, particularly those well to her left, could force Adams to confront the mayor or risk a mutiny. Even before assuming their seats,  members clashed with the then-mayor-elect over his support of solitary confinement at Rikers Island, forcing the then-incoming speaker to state her opposition to punitive segregation or solitary confinement to NY1.

“She’ll have to forge agreement between different groups and develop policy with a city administration that she may have to, in fact, be in conflict with in order to survive politically,” Hank Sheinkopf, a political consultant who works with a number of labor unions, said. “She has to be very nimble.”