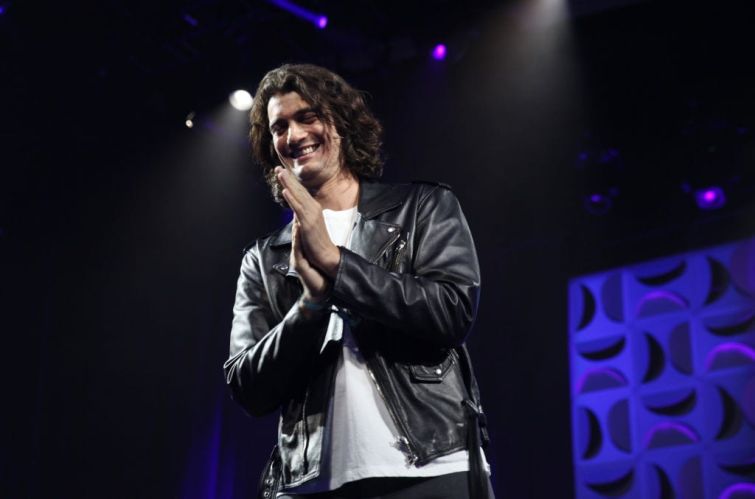 For those who don’t remember how it all started and soured, WeWork began the IPO process in 2019 as the world’s second most valuable startup with a $47 billion valuation. In a matter of months the company was transformed into a reeling, $2.9 billion hot mess with the erratic Neumann being shown the door after antics like smuggling weed on international flights and hiring Run-DMC’s Darryl McDaniels to perform right after layoffs at the company.

But on Thursday Neumann had reason to celebrate: The initial public offering boded reasonably well. Stock for WeWork began trading at $10.38 a share and quickly rose above $11 by mid-morning of the opening. The dude still owns plenty of WeWork stock, so he reeled in hundreds of millions.

Perhaps the market has faith in one guy who has a lot of experience turning around ailing real estate: current WeWork CEO Sandeep Mathrani.

Mathrani will have his work cut out for him if the coworking behemoth is going to truly live up to its current valuation. But at Commercial Observer’s Future Forward event earlier this month in Miami Mathrani pointed out that WeWork might already be on its way:

“We leased 9.2 million square feet in Q3,” Mathrani said. “I don’t think there’s an office landlord in the world who did that much in that quarter, which speaks highly to our business model.”

And, while WeWork is certainly an interested party in painting a rosy picture not just of their business but of the office scene more generally, they’re not the only ones who have a good story to tell. At another CO event this month landlords and brokers were distinctly positive about the future of office leasing.

“I believe that the market possesses the same elasticity and ultimate resiliency as sectors that have more clearly rebounded,” said Douglas Durst, the conference’s keynote. “The trajectory of the commercial office market early this summer was extremely positive, but the delta variant caused many tenants to delay their return. Still, we have seen a steady increase in office occupancy this fall.”

This cautious optimism can be backed by leasing and sales, which have been climbing over the last month.

Venable, the Washington, D.C.-based law firm, just nailed down 157,800 square feet at Durst’s own One Five One in Times Square.

In addition to the phenomenal success SL Green has enjoyed at One Vanderbilt, which just opened its four-level, 65,000-square-foot entertainment space called The Summit on the top of the building, the landlord could boast that Chelsea Piers became its first tenant at One Madison, having signed a 55,780-square-foot lease for a four-level fitness center in the 1.4 million-square-foot project. (Oh, and speaking of top-floor amenities, we’d be remiss if we didn’t relate that KKR purchased a majority stake in 30 Hudson Yards’ observation deck for a stunning $508.5 million.)

All this is good news for Manhattan’s new and expensive office stock.

Just last month the $4.5 billion Manhattan West development opened to the public with much pomp and fanfare. (Questlove and The Roots performed at the opening, with food courtesy of Danny Meyer.) And the story told by its developer, Brookfield, has been a largely positive one.

“I think it’s a phenomenal opportunity for us to be able to present what probably looks like the future of work, the future of live and the future of play with all different components that encompass the 7 million square feet,” Brookfield’s Ben Brown told CO in our deep dive into the project. “I actually think it could be perfectly timed, and projects like Manhattan West probably will be what we see real estate development continue to [aim for] going forward; things that have mixed uses, things that have a health and wellness focus and an experiential focus.”

Of course, one of Manhattan West’s major selling points always was that it was near transit, specifically Penn Station. However, Penn Station’s status is a bit more complicated than it was even a few months ago.

The rebuilding of Penn Station was something that then-Gov. Andrew Cuomo had donated a lot of time, effort and political capital toward, calling it the Empire Station Complex. Vornado owns millions of square feet of real estate surrounding the station, which it planned to redevelop in tandem with New York, in the process spending billions of dollars to improve the station and its surroundings.

But is Gov. Kathy Hochul as gung-ho on plunking down billions for this? This is the question that anyone who cares about Midtown South must be asking right now.

Gov. Hochul’s colleagues were busy this week, too.

With just over two months left in his second tour of duty, New York Mayor Bill de Blasio issued an order requiring all municipal employees to get vaccinated for COVID-19 by the end of the month, without the option of being tested weekly. The order applies to some 160,500 city workers, including cops and firefighters (corrections officers have until Dec. 1 due to staffing issues at Rikers). And de Blasio threw in a sweetener: Anyone who gets vaccinated before Oct. 29 will get a $500 bonus. (So, if you followed the rules and acted responsibly months ago, you get … nothing.)

We also learned this week that the city and the City Planning Commission is being sued by a group called New Yorkers for Tourism to stop the proposed citywide hotel special permit. This is the proposal to ban hotel construction in the five boroughs without a lengthy review process.

Speaking of the City Planning Commission: Finally, after several years of debate, the CPC unanimously approved the rezoning of SoHo and NoHo, paving the way for thousands of potential new apartments in those areas. (It should be noted that this was not popular with all parties. “What [the rezoning] will do is threaten hundreds of units of rent-regulated affordable housing in these neighborhoods, driving out the considerable number of older, lower-income, longtime residents,” said Andrew Berman, head of the Greenwich Village Society for Historic Preservation. “It will push out the struggling smaller independent and arts-related businesses of the neighborhood, while rewarding the mayor’s developer-donor friends with a massive giveaway of the city’s real estate and an almost unimaginable windfall.” Berman wasn’t the only one dissatisfied.)

Of course, Manhattan isn’t the only place where interesting deals are happening.

In L.A., Warner Bros. is selling the Ranch Studio to Stockbridge and Worthe Real Estate Group, and then leasing the property back after a big half-billion-dollar makeover.

This is Worthe’s second mega-deal this month. Nearly two weeks ago, along with their partner Invesco, they sold the 100,000-square-foot, Gensler-designed 325 North Maple Drive, called The Post, in Beverly Hills for $153.2 million.

In Miami, the D.C-based Lerner Enterprises (which owns the Washington Nationals) announced that it was picking up the Motion at Dadeland, a 294-apartment high-rise that includes some 8,246 square feet of retail and a future preschool, for $114 million.

The Boston-based Rockpoint Group scooped up the Yankee Clipper hotel in Fort Lauderdale for $117 million.

And, not one to be left out of the buying, the Related Group is looking to purchase the undamaged sister buildings of Champlain Towers South. (But this might be somewhat complicated; the buildings are condo, so they’d have to get agreement from 95 percent of the owners.)

Regionally, there are a lot of different trends that one sees in real estate, but there is one single constant: Industrial is kicking butt.

The supply chain concerns that have been cropping up in the last couple of weeks only serve to emphasize that America’s industrial and warehouse space still has quite a lot of runway for growth.

To wit, CO decided to go straight to the horse’s mouth. We spoke to former Extell executive Dov Hertz, the founder of DH Property Holdings, about America’s continued hunger for e-commerce and why this trend continues its forward momentum.

Speaking of people who are baaack (or maybe never left) former-President Trump is striking out with a new social media platform, and to do it he’s using every developer’s favorite vehicle for going public: a SPAC.