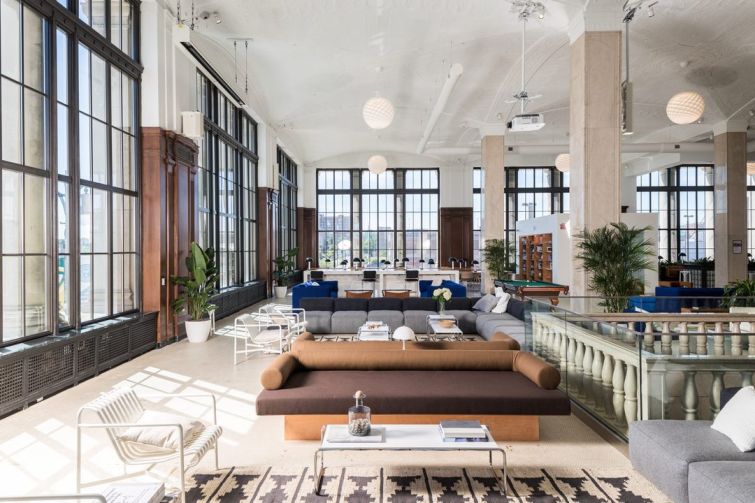 The coworking giant began trading on the New York Stock Exchange on Thursday, going public nearly two years after its disastrous first attempt led to the fall of its charismatic former CEO Adam Neumann and a fluctuating valuation. Shares opened at $10.38 apiece under the ticker symbol WE.

Shareholders of BowX Acquisition Corp., a special acquisition company (SPAC) that agreed to merge with WeWork and take it public in a $9 billion deal earlier this year, voted nearly unanimously on Oct. 19 to finalize the agreement.  On Wednesday, BowX Acquisition’s shares closed at $10.38, up nearly 11 percent, and WeWork shares rose above $11 per share by 9:30 a.m., according to the New York Stock Exchange.

The BowX deal snagged WeWork a $1.3 billion cash infusion, the company said in a statement. It values WeWork at about $8 billion, not quite the company’s eye-popping valuation of $47 billion in 2019 but an improvement from its $2.9 billion from last year. Nor is the BowX merger the first time WeWork has tried to go public. But it is the first time the company’s succeeded.

BowX — which counts NBA legend Shaquille O’Neal as an adviser — raised $483 million last year to form a shell firm using proceeds from a public listing to buy a private firm, also known as a SPAC. It has been in talks to merge with WeWork since at least January, Commercial Observer reported.

“Today is a testament to the determination of our company to not only transform our business, but also to adapt and deliver the options that today’s workforce demands, Sandeep Mathrani, CEO of WeWork, said in a statement. “As companies around the world reimagine their workplace, WeWork is uniquely positioned to offer the space and services that can power solutions built around flexibility.”

The coworking giant’s first attempt to go public in 2019 through the more traditional initial public offer process (IPO) process failed spectacularly after WeWork came under fire over conflicts of interest from its former CEO and concerns over its cash-burning business model. Neumann then stepped down and WeWork pumped the brakes on its IPO later that year.

Neumann, who co-founded WeWork in 2010 in SoHo, started testing out the coworking concept with an early incarnation, Green Desk, in 2008. Neumann and his co-founder, ​​Miguel McKelvey, imagined a communal workspace serving the average office worker’s needs while promising more not just in amenities, but in community. The concept caught on and drew scores of venture investors, and WeWork expanded into residential real estate and gyms, Insider reported.

But WeWork’s IPO filing proved a stark contrast to the company’s glitzy portrayal. WeWork posted a loss of $1.6 billion on revenue of $1.8 billion in 2018 and faced serious scrutiny from investors. Now under the leadership of real estate legend Mathrani, the company has tried to clean up its act from the tumultuous Neumann-era, known for a hard-partying leadership style that once included throwing a tequila bottle through a glass pane, and cut down on its huge cash burn. However, Neumann managed to extract more than $2.1 billion from WeWork during his tenure, even as the company lost more than $11 billion.

Despite the multiple scandals, WeWork maintains a global scale today. The company has 762 locations in 150 cities and 38 countries, even after cutting hundreds of locations before and during the pandemic. It saw its highest 2021 monthly earnings in September and was awarded its first federal coworking contract this year, for $10 million, CO reported. It has also made a series of partnerships with high-profile firms during the pandemic, including a $150 million investment from brokerage Cushman & Wakefield, which hinges on completing its stock listing.

Despite some naysayers casting doubts on WeWork ever becoming profitable, analysts have now cautiously suggested WeWork now has a bright future.

WeWork’s decision to go public through a SPAC comes as SPAC deals have slowed this year, amidst increased scrutiny from the U.S. Securities and Exchange Commission and disappointing stock performance, though the method was popular in 2020. Some startups have begun to sour on SPACs and turn down merger offers, The Wall Street Journal reported. SPACs have also been hit with a rising number of class-action lawsuits, CNBC reported.