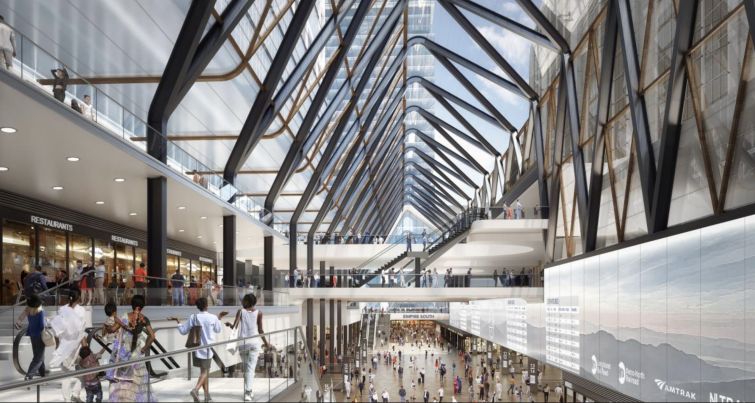 One of the potential redevelopment plans for Penn Station that the MTA unveiled earlier in 2021. Rendering: MTA

Former Gov. Andrew Cuomo’s plan to redevelop Pennsylvania Station and the surrounding neighborhood was his most ambitious infrastructure project — and the one that he was least likely to finish. Now there are questions about how the sprawling effort — which includes rebuilding the aging rail station and constructing several new buildings to help finance those upgrades — will look with Cuomo out of office.

Gov. Kathy Hochul, speaking at a New York Building Congress breakfast on Oct. 14, affirmed her commitment to renovating Penn Station, calling it “one scary place.” However, neither she nor her economic development officials have revealed specifics on how they would change the Cuomo plan or advance it.

The current version of Penn Station, which was built in the 1960s after the demolition of the iconic McKim, Mead & White-designed train station, has low ceilings and no natural light. It’s hampered by Madison Square Garden, which sits on top of it, and it was not designed to serve the 600,000 daily passengers that passed through it before the pandemic struck.

The Cuomo-era development plan — dubbed the Empire Station Complex — mostly offers a broad outline of what could be built or changed around Penn Plaza. While the zoning has not yet been finalized, it would likely cover several blocks between Ninth Avenue and Avenue of the Americas and from West 34th to West 30th streets.

Vornado Realty Trust, which declined to comment for this story, owns several of the properties adjacent to, and on top of, Penn Station, including One and Two Penn Plaza, the Hotel Pennsylvania and the Manhattan Mall. Together with the Empire State Development Corporation, Vornado helped convert the Farley Post Office building across Eighth Avenue from Penn Station into Moynihan Train Hall. And, in January, the real estate investment trust — in conjunction with the Metropolitan Transportation Authority — opened a new, glassy entrance to Penn Station at the corner of West 33rd Street and Seventh Avenue that includes wayfinding signage for the various train lines and a curved, line map mural of New York City.

The General Project Plan (GPP), which is a rezoning proposal driven by Empire State Development rather than by city agencies, allows for up to 10 new buildings to be constructed around Penn Station. The plan predates the pandemic, which cast doubt on whether that many buildings — most of them office — would actually fully fill with tenants, given shifts to hybrid and remote work. More importantly, the state and the city have not settled on how the owners of the buildings’ sites would contribute to the renovation and expansion of Penn Station, which would likely run to the tens of billions.

It might involve property owners making payments in lieu of taxes (PILOTs), a controversial mechanism that was also used to finance the construction of the 7 line extension to Hudson Yards — and left the city holding the bag for the unfunded costs of the project. Developers would also likely be able to pay for subway upgrades and street improvements — like bike lanes, sidewalk widenings, and new public plazas — in exchange for the right to build larger buildings, according to the GPP documents.

Rachel Fauss, a research analyst at watchdog group Reinvent Albany, lamented the lack of transparency around the proposed PILOT structure and how the Penn Station upgrades would be financed.

“The GPP mentioned that the financing structure could include payments in lieu of taxes but we don’t know the full scope of what they could or would do,” she explained. “One of the limitations of an EIS [environmental impact statement]-type process for these megaprojects is that there’s not really a requirement to explain the financing. They exempt it from [the city’s] ULURP development process, but at the same time they are announcing a structure where city tax dollars could be siphoned off [by the state] to finance the project.”

Comparing the Penn Station renovation to Hudson Yards, she asked, “What happens if the development doesn’t happen the way the state says it will? Whether the state or the city pays, it will probably end up being city taxpayers who are responsible. I think the public deserves a full public accounting of how this could work, and who pays for it.”

The MTA unveiled two Penn Station renovation proposals this April, but it has not attached a price tag to either of them. Various questions about the station renovation remain unanswered, including whether the three competing railroads with Penn Station would want to expand their tracks to the south. Such an expansion would require the state to acquire several properties along West 31st Street, either through typical real estate deals or the lengthy and expensive eminent domain process. The state could also purchase — at significant cost — the 5,600-seat Hulu Theater at Madison Square Garden, which would allow the MTA to construct a new entrance to Penn Station along Eighth Avenue.

Meanwhile, Vornado is getting ready to start construction on one of the largest of those 10 buildings, a 2.6 million-square-foot office and retail tower on the site of the Hotel Pennsylvania, at 401 Seventh Avenue. The 102-year-old hotel was shuttered in April 2020, and Vornado expects that it will take roughly two years to demolish its 1,700 rooms and begin construction on the new office building. The Foster + Partners-designed tower, known as Penn 15, is supposed to rise 1,270 feet and 57 stories into the air.

The commercial landlord is renovating the Long Island Rail Road concourse inside Penn Station, which involves moving Two Penn Plaza’s below-grade retail 60 feet deeper into the basement in order to widen the concourse and raise its ceiling. It is also renovating its public plazas around Penn Station, widening the sidewalk on Seventh Avenue, and rebuilding the main mid-block entrance to Penn Station along Seventh Avenue to make it wider and more attractive. The New Jersey Transit entrance, at the corner of West 31st and Seventh Avenue, will remain as it is for now.

Brian Fritsch, the manager of advocacy campaigns at the Regional Plan Association, noted that funding of the Penn Station renovation and expansion is actually governed by law. When New York and New Jersey formed the Gateway Program Development Corporation — which is also tasked with financing and building a new rail tunnel under the Hudson River — they agreed that 25 percent of the funding would come from New York, 25 percent from New Jersey and 50 percent from the federal government. He said that the same financing structure applied to Penn Station itself.

While he pointed out that Hochul and her administration “have not been vocal about where they stand on this project,” he felt optimistic that she “will prioritize getting something done that’s important for the long-term health of that neighborhood, the city and the entire region.

“I think there’s a ton of value in making a saner, safer and ultimately productive Penn Station,” Fritsch said. “It’s the heart of our regional transportation system and it hasn’t functioned well for years. Expanding capacity and improving the older part of the station should be priorities for any administrator. There are a lot of things that should be considered both below ground and above ground.”