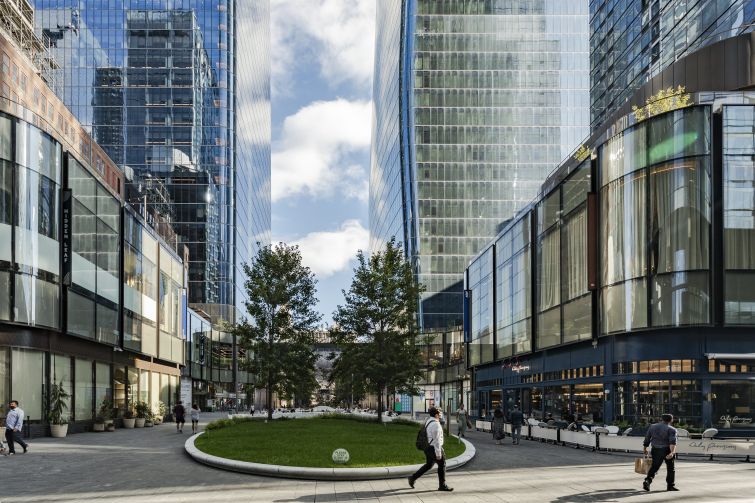 Brookfield hopes that public spaces, including a large plaza between West 31st and 33rd streets, will help integrate Manhattan West into an area of Midtown South once best-known for large trainyards. Photo: Sasha Maslov

The long-awaited opening of Brookfield Properties’ Manhattan West development coincides with unexpected hurdles from when the project was first conceived that will truly test the historic reliability of Midtown South’s Far West Side commercial real estate sector.

The $4.5 billion project opened to the public in late September, nearly eight years after ground was first broken along Ninth Avenue on a platform over Penn Station storage tracks. It is aimed at transforming what was largely a barren landscape into a dynamic mixed-use neighborhood encompassing signature dining, hospitality, entertainment, modern office space, luxury apartments and experimental retail.

However, Manhattan West arrives at a time of uncertainty for Manhattan’s retail, office and hospitality markets as the nation recovers from the worst of the COVID-19 pandemic and the near-term obstacles of increasing work-from-home trends and declining tourism make quick success a more daunting task.

But, was the timing actually so bad?

An argument could be made that the timing was better than it was for Manhattan West neighbor Hudson Yards, which opened a year before the pandemic, but had to watch as tenants either stayed away or, in the case of its retail anchor, Neiman Marcus, closed up shop and fell into bankruptcy.

“In a way, I sort of turn it on its head, and say, I think it’s a phenomenal opportunity for us to be able to present what probably looks like the future of work, the future of live and the future of play with all different components that encompass the 7 million square feet,” Brown said. “I actually think it could be perfectly timed, and projects like Manhattan West probably will be what we see real estate development continue to [aim for] going forward; things that have mixed uses, things that have a health and wellness focus and an experiential focus.”

Located steps from Penn Station’s Moynihan Train Hall, Madison Square Garden and the High Line, Brown said Manhattan West is situated in a desirable geographic zone that can attract tourists who are visiting the nearby theater, entertainment and art districts. A $50 million proposal by Gov. Kathy Hochul to extend the High Line directly into Manhattan West’s 2.5-acre public plaza will also provide a major boost in volume, along with plans to connect it to Moynihan, according to Brown.

Culinary destinations in the neighborhood include Ci Siamo and Daily Provisions from Danny Meyer’s Union Square Hospitality Group, as well as a Chinese restaurant called Hidden Leaf located above a 160-seat Midnight Theatre. The development’s retail component features a Whole Foods that opened in July 2020 and a Peloton store set to debut this January. Experiential retail is also incorporated into the project, with Peachy Skin Care opening in November and Peloton Studios Fitness coming afterward.

Late last month Brookfield pulled out all the stops for one of New York’s first in-person openings since COVID hit the city, with visitors serenaded by Questlove and The Roots, and fed with treats from Meyer.

Brown would not specify the asking rents, but said Brookfield has been seeing the “highest rents in the market” compared to other new construction projects and ones consistent with other newer Manhattan assets like neighboring Hudson Yards and the One Vanderbilt office tower by Grand Central Terminal. SL Green Realty’s asking rents at One Vanderbilt were reportedly as high as more than $300 per square foot, as of August.

Zach Steinberg, senior vice president of policy for the Real Estate Board of New York, said Manhattan West has proven resilient amid challenges posed by the pandemic as evidenced by high leasing rates for two of the completed office towers, at 1 Manhattan West and 5 Manhattan West. He noted 2 Manhattan West is also receiving major interest from companies for when it opens in 2023 and that the residential tower at 3 Manhattan West is 98 percent occupied.

“I think this project has obviously been taking place over phases, but I think if you look at what’s gone on, it’s been a pretty substantial success at every turn,” Steinberg said. “The success of this project is a good indication of the fact that New York City is a good place to be involved in the real estate industry and we’re going to get through this pandemic and recover and that smart investments, disciplined strategies to bring those investments to market, are still worth it here.”

“Many of the tenants we’re seeing taking space in the new properties are migrating from other older assets either in Midtown or other parts of the city,” Chandan said. “It takes time for a newer asset to lease up and I think the challenge here is to the older assets that are not as attractive [and as a result] tenants are substituting into new properties.”

Manhattan West was in the works well before the phrase “COVID 19” meant anything. Wells Fargo provided a $530 million debt package to Brookfield in July 2018 to finance construction of 1 Manhattan West, located at 401 Ninth Avenue, which opened in October 2019. The loan came shortly after London-based accounting firm EY inked more than 600,000 square feet of space from the sixth through 22nd floors of the 67-story, 2.1 million-square-foot office tower in a lease that runs through 2037.

The 94 percent-leased 1 Manhattan West also houses consulting company Accenture, law firms Skadden Arps and McKool Smith, global investment firm Pharo and the National Hockey League’s new headquarters, which relocated from Avenue of the Americas. The NHL also has a team store in the building and will soon open an ice rink in Manhattan West’s public plaza.

In 2019, Brookfield secured law firm Cravath, Swaine & Moore to anchor 2 Manhattan West with a deal for 480,000 square feet on the 25th through 37th floors of the 58-story building. The law firm is relocating its headquarters from 825 Eighth Avenue. As of mid-October, 2 Manhattan West is 25 percent leased for its 2 million available square feet, according to Brookfield.

The third office tower in Brookfield’s development, 5 Manhattan West at 450 West 33rd Street, received a $1.5 billion loan from Landesbank Baden-Wuerttemberg in March 2018 that replaced and consolidated a previous $570 million debt package from Wells Fargo with $580 million of new financing. Brookfield completed a $350 million redevelopment of the property, which originally opened in 1969 as the Westyard Distribution Center.

While Manhattan West is confronting near-term headwinds from more companies allowing remote work, Brown said all office leases signed pre-pandemic have remained in place with a variety of companies inquiring about inking new deals. He said with remote working more of an option, having Class A office space will be essential to draw employees out of their homes and coffee shops.

“It’s really a good cross section of both tech and media, some consumer, some consumer goods-facing companies and then your traditional law firms, financial services and professional services,” Brown said. “Where we sit today, physical occupancy in most of our buildings is trending up, but is hovering around 20 to 30 percent and we expect that to continue to increase over the fall.”

NYU’s Chandan stressed that Manhattan West is well-positioned on the office side with long-term leases and that companies are looking beyond the near-term work-from-home trends. He said many companies are using the pandemic as a way to capitalize on transforming their office environment with enhanced amenities.

“We want to differentiate between being relatively short-term adjustments that companies are making in their return-to-office schedules as a response to the immediate reading of the pandemic, versus the relatively longer term,” Chandan said. “I think of a long-term lease as a long-term investment and we see many firms anticipating what their needs will be over the longer term and taking advantage of a market where, given the dynamics, they can negotiate favorable deals.”

Brown said he thinks Manhattan West and Hudson Yards can build off each other’s successes, but the former will stand out more because of its large public plaza that will create natural pedestrian flow between West 31st and West 33rd streets that is generally seen in more central areas of Midtown. He said an expected bump in international tourism once travel restrictions are lifted will provide the necessary boost for Manhattan West’s long-term success as visitors seek out a new destination close to other mainstay attractions like the High Line and Madison Square Garden.

“You’ve got one of the busiest transit hubs in the world as your next-door neighbor, you’ve got one of the most famous entertainment venues and then you have one of the most unique sort of public experiences with the High Line at your doorstep,” Brown said. “We have 8 million people that are experiencing the High Line every year that are either going to start that journey or end that journey in our projects and I think that’s a huge component to what will be the vibrancy and activity.”