Is that enough for the coworking giant to thrive post-COVID? Sandeep Mathrani, its CEO, thinks so. 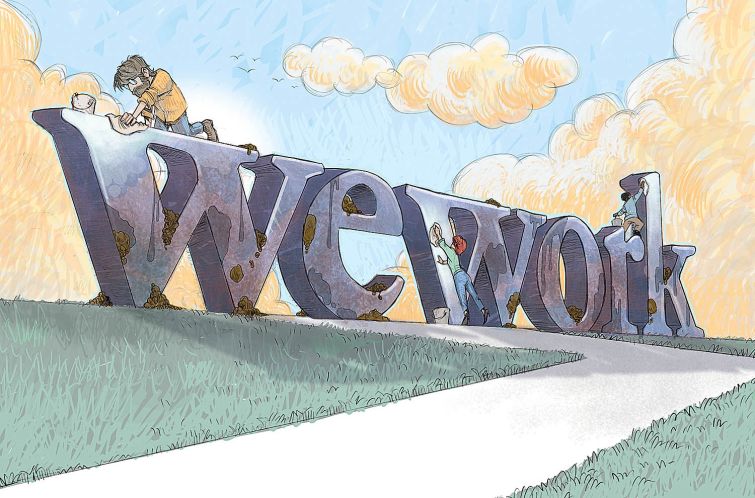 When WeWork CEO Sandeep Mathrani said the coworking giant was “the right company at the right time” during an October presentation to investors meant to highlight the firm’s renewed relevance in a remote office reality, it underscored the way WeWork has rode notoriety and infamy into a plausible, perhaps unexpected, case for profitability.

While significant doubts remain as to the resurgence of what at one time was the Fyre Festival of office leasing — Mark Dixon, CEO of flex office foe IWG, told Commercial Observer in June that WeWork needs a “miracle” to hit recovery targets and become profitable after going so far underwater — a number of analysts cautiously suggest WeWork, not to mention coworking and flexible office space in general, has a bright future even beyond this current moment of uncertainty.

Alexander Snyder, a portfolio manager at CenterSquare Investment Management, who feels “bullish” about WeWork for the first time in its history, said profitability is “an inevitability.” Like an indulgent rock star who’s found religion, the reformed firm still benefits from its earlier, wilder and outsized cultural footprint.

“WeWork was already a household name after what Adam Neumann did,” Snyder said, referring to the company’s co-founder and former CEO. “I mean, there’s a Hulu documentary about a random company that leases office space and people actually watched it. It’s a fascinating construct. The publicity wasn’t positive, but when people needed office space during the pandemic, that’s who they were going to Google. IWG has been public for 20 years, and nobody knows what that is.”

Shareholders in BowX Acquisition Corp., a special purchase acquisition company (SPAC), greenlighted a merger with WeWork on Oct. 19, a move that took the company public. Still, WeWork is better known via Neumann’s well-documented misbehavior. But the only name investors care about right now is Mathrani, often referred to among analysts by first name alone, who took the helm in February 2020. While Sandeep has revised his own timeline for the firm’s profitability, moving back a previous goal post of year-end 2021 to 2022, his strategic streamlining of dead weight, fanciful business ventures and non-performing assets have got many investors more confident in coworking’s long-term health.

“He isn’t in it for the money,” said Alexander Goldfarb, managing director and senior research analyst at investment bank Piper Sandler, who sees a bright future for the coworking business model. “He’s motivated and he’s intrigued. If you’re trying to turn a business around, you need to be someone who’s creative and headstrong. When you have someone who’s known by their first name, it’s pretty good.”

The shift can best be summed up by an observation from Snyder that Neumann wanted to change the world, while Sandeep just wants to be in the black. WeWork maintains a global scale today, with 762 locations in 150 cities and 38 countries, but has sharply cut back across the board, especially since the start of the pandemic. In the past 20 months, the company has exited 150 leases and executed 350 lease amendments, saving $400 million annually, and slashed its everyday operating expenses by $1.1 billion on a run-rate basis. Total desks have shrunk to 730,000 from 916,000, and, while they may inch up to 810,000 by the end of 2022, as Mathrani predicts, growth is expected to be much more strategic. (Snyder’s CenterSquare does not own BowX stock.)

His cuts “under cover of darkness,” said Snyder, have contributed to a string of positive, though not yet profitable, months. WeWork’s third-quarter revenue hit $658 million, with $228 million in September alone, the fifth straight month of revenue growth, while occupancy inched above 60 percent by the end of September. That’s a sharp contrast from this spring, when WeWork hit a recent low of 490,000 total customers in March after losing nearly 200,000 the previous year, and had to pay nearly $500 million as part of a settlement with Neumann.

“We leased 9.2 million square feet in Q3,” said Mathrani during a Commercial Observer event in Miami in mid-October. “I don’t think there’s an office landlord in the world who did that much in that quarter, which speaks highly to our business model.”

Mathrani also highlighted the growth of the firm’s All Access memberships, an on-demand model that’s been recruiting roughly 1,000 members a week and that grew to 32,000 from 20,000 between the second and third quarters last year. The pay-as-you-go model is already a $10 million-a-month business and poised to grow. Dror Poleg, a former adviser to WeWork competitor Breather and former co-chair of the Urban Land Institute’s Technology and Innovation Council in New York, feels Mathrani’s strategy during the pandemic has been sound. He predicted that the company would increasingly see competition from more flexible office offerings and would need to respond in kind.

This service, which Snyder said Mathrani redefined as part of his larger vision of focusing on core competencies, highlights the strengths of the company going forward.

“The pandemic pushed the need and desire for flexible workspace, since nothing increases the need for flexibility like uncertainty, and right now we are swimming in uncertainty,” Snyder added.

Competitors in the field say more a-la-carte, on-demand models have thrived during the pandemic. Sam Rosen, co-founder and CEO of Deskpass, which offers monthly memberships to a growing number of workspaces across the country, said his firm has seen 4,000 percent growth since this March, compared to an annualized growth rate of 150 percent pre-pandemic.

“Flexibility and mobility in work has been a strong theme since the last financial crisis, but it was a hobby for companies,” Rosen said. He also believes profitability is all but assured for WeWork under current conditions. “Companies thought coworking was cool but unnecessary. COVID has fundamentally changed organizations both small and large and their relationship to the office.”

And WeWork’s been buoyed by the fact that urban naysayers, who thought cities, and all their offices, would empty out, were proven wrong. Goldfarb said that though office buildings remain only partially occupied and many companies’ workforces remain at least partially remote, there’s still great value in togetherness reflected in long-term real estate thinking.

“Bringing people back to the office is how you perpetuate culture,” he said. “You need that togetherness, which goes back to the premise that this is a future for temporary, short-term space. The internet didn’t end when Pets.com and everything in the late ‘90s exploded; companies evolved and we saw the emergence of the powerhouses of today. Just because coworking 1.0 didn’t work doesn’t mean coworking 2.0 or 3.0 won’t.”

The question about WeWork’s eventual profitability presents a larger question about its long-term success, which has analysts speaking more cautiously. In whatever new normal follows the pandemic’s disruption, it’s certain WeWork will face more competition.

Snyder sees brokers and landlords trying their best to get into the game as much as they can; while smaller coworking competitors won’t necessarily catch WeWork, larger brokerage firms like CBRE and JLL (which has a partnership with WeWork) will begin doing space-as-a-service themselves on a much larger scale, greatly aided by a market with large swaths of available and less expensive office space. CBRE, for its part, invested more than $200 million in Industrious in February to take a 35 percent stake in the flex space provider. And WeWork’s current run is likely to lose momentum once widespread uncertainty turns to more long-term bets.

“WeWork is vastly outpunching their weight right now,” Snyder said. “They’re roughly 1 percent of New York office stock and account for 23 percent of leasing activity. Uncertainty is driving a lot of business to them, and there’s a non-zero chance the growth rate slows as everything picks up and more traditional leases and landlords come back into vogue.”

Though WeWork under Mathrani has made a significant, and increasingly successful, pivot, it likely won’t be the last the firm needs to make to stay competitive.

“A few years ago, WeWork was in the culture-building lifestyle business, now they rent offices,” Rosen said. “They’ve proven they’re a good business, now that they’re focused on their core business. But their average lease is still 28 months, which is a lower risk for big firms, but not really all that flexible. I fundamentally believe real-time, on-demand access will be more powerful and a disruptor.”