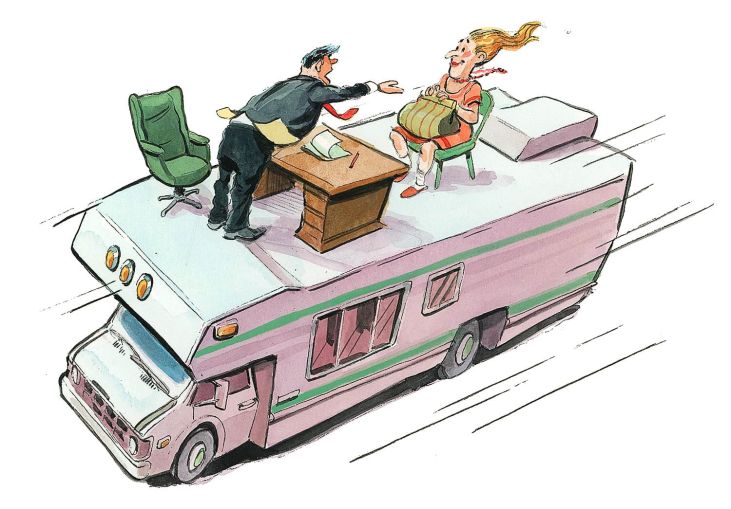 The month normally kicks off with our rating and ranking of the 50 most powerful people in finance, and ends with our list of the 100 most important people in commercial real estate overall — and this means hundreds of calls and emails, and cranky bankers and developers cursing us out for lowering them in our rankings.

Well, after being thrown off our game by COVID-19, we moved our Power Lists to the summer last year and, in an effort to get back on a semi-normal schedule, May is now the cruelest month. (Take that, T.S. Eliot!)

We’re always asked how we assemble it and rank everybody. A lot of it is examining the straight numbers, but a significant chunk is the story of how the year played out.

Who was the first one in the pool after COVID hit? Who wrote the biggest loans? Who steered clear of the siren call of leverage? What about the agencies? (They made some interesting plays this year.) Where does New York investment stand in all of this? And where did the banks and lenders operate from, in a year when nobody was going into the office? (Hint: Did you ever hear of Albert Brooks’ “nest egg principle” in “Lost in America”? It was Brooks and Julie Hagerty’s first purchase before blowing their nest egg in Las Vegas.)

The results are the biggest and best names in real estate finance. Perfect Sunday reading!

One of the interesting little lessons of the COVID era was that a lot of real estate money felt safe going into movie studios. And, even as we’re coming down from the worst of the pandemic, that worldview still seems to hold true. To wit, Bain Capital and BARDAS Investment Group are the latest, planning a $450 million studio development at 5601 Santa Monica Boulevard in Hollywood that they’re calling Echelon Studios. (“Echelon” is the name of the content and real estate platform joint venture between Bain and BARDAS.)

An area that hasn’t felt nearly as safe has been hospitality … And, yet, this week, we learned that one of the biggest names in retail, Jeff Sutton, was turning his Midtown retail building at 25 West 34th Street into a 363-room hotel (no word yet on who the operator would be). For a lot of real estate machers, this might be viewed as baffling. But Sutton is also one of the grittiest and shrewdest players in real estate. We imagine something had to pencil out for him to advance here and now, and this should give Midtown’s hospitality operators some hope.

Of course, the hospitality aspects of real estate (at least the food-and-beverage dimension) have been looking up for a while. We’re seeing leases like French bakery Maman opening a 1,694-square-foot outpost at 230 Park Avenue.

Gyms, too, which were horribly battered by the pandemic, have turned a corner. In Miami, Alex Rodriguez’s UFC Gym signed a 36,500-square-foot lease at Doral Square.

Even coworking, another area that seemed particularly vulnerable to a pandemic, is an idea that real estate operators are getting excited about again. Tishman Speyer is bringing its own coworking brand, Studio, to two spaces that were left vacant by WeWork, and SL Green is launching its own flex office venture, Altus Suites, to take space at One Vanderbilt.

The optimism in the air is palpable. The only disappointment were the April jobs numbers released on Friday, which were a steep comedown from the March numbers. (The U.S. added 266,000 jobs in April, but, in March, we had added 770,000.)

Don’t call it a comeback …

Goldman Sachs told employees to expect a June return to the office, according to a memo obtained by CO.

And New York City basically told city workers to come back to work last week, whether there’s a clear return-to-work plan or not. (Not everybody’s happy about this.)

On the softer side of the return-to-work news, Google’s Sundar Pichai announced a plan this week to allow 20 percent of staffers to work remotely on a permanent basis.

“Our campuses have been at the heart of our Google community and the majority of our employees still want to be on campus some of the time,” Pichai wrote in the email. “Yet many of us would also enjoy the flexibility of working from home a couple days a week, spending time in another city for part of the year, or even moving there permanently. Google’s future workplace will have room for all of these possibilities.”

In the end, Google’s model will probably come down to three days in the office, two days remote, as well as four weeks a year of work from anywhere in the world.

Let the Sunshine State in.

Another week, another spat of massive deals happening in Florida.

But, there were other deals, too. Location Ventures spent $20 million on a site for its co-living/coworking concept URBIN. (See what we said about coworking?) Financings are happening, like Grant Cardone landing $64 million for the 310-unit Bask in Harbor Park apartments in Fort Lauderdale. And Downtown Fort Lauderdale’s first five-star hotel (which is being developed by Hudson Capital Group) is continuing construction. (See what we said about hospitality?)

It’s no wonder that developers like Don Peebles and legendary New York brokers like Newmark’s Robert Emden see such opportunity in the state.

The big problems of COVID still remain, naturally. There are still tenants who are AWOL with their rent, like American Girl, which has essentially skipped out on its Rockefeller Center location, causing RXR Realty to bring a lawsuit.

And landlords might not be happy with the fact that the Rent Guidelines Board may freeze rents again for rent-stabilized apartments, extending the freeze that has been in place since the pandemic struck.

And, on a sad note, Eli Broad, one of the great champions of Los Angeles, died last week. He left a great legacy worth reflecting on on this day of rest.