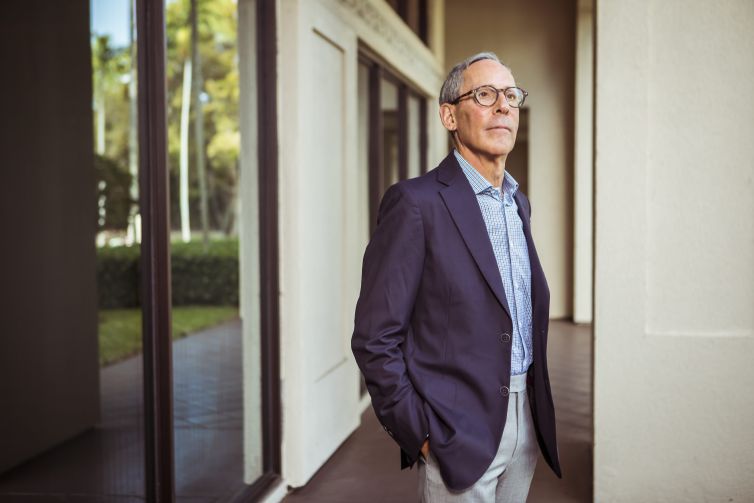 After a long and illustrious New York career, Robert Emden, an executive managing director at Newmark, made a pandemic-timed move to Florida — but he isn’t retiring.

Like many New Yorkers, the seasoned broker found himself spending time in Palm Beach in COVID’s early days. Since then, his clients have followed. Major financial firms, such as Elliott Management, Point72 and Blackstone Group, signed leases in South Florida. Tight-lipped on specifics, Emden only divulges that he is advising “household names.”

His career spans 50 years. The real estate veteran started out in the early 1970s, as the first employee of legendary broker Ed Gordon’s firm, the Edward S. Gordon Company (ESG). The company grew to become one of New York’s largest real estate services companies with 450 employees before Insignia Financial Group bought it for $74 million in 1996.

After a five-year stint at the now-defunct brokerage PBS Real Estate, Emden joined Newmark in 2010 to lead a team specializing in private equity, hedge funds and family offices. Along the way, the dealmaker, known for his expertise in New York’s Plaza district, accumulated an impressive roster of clients and projects. They included News Corp.’s move to its current base at 1211 Avenue of the Americas and working with Blackstone billionaire CEO Stephen Schwarzman.

Emden sat down virtually with Commercial Observer to discuss his esteemed career, his thoughts on South Florida, and why he doesn’t want to slow down in the Sunshine State.

Commercial Observer: Tell us about how you got your start in commercial real estate.

Robert Emden: I graduated in 1970 during the Vietnam War. So, I was trying to avoid the draft. I’d always had a passion for real estate. But I started, actually, in residential and was in it for almost a year. I hated it.

Why didn’t you enjoy it?

I was just showing apartments. The work essentially revolved around who can get to the end line first. It wasn’t a sophisticated environment, in my opinion.

But, with commercial real estate, I felt important. I was in a building environment, crafting the images of firms, and using my mind to deal with the corporate community — sophisticated players. It was a 180-degree turn.

So, how did you get into commercial real estate?

I got interviews with various firms. So, I went to Cross & Brown — they were big monsters in those years. They said, ‘You should call this guy, Ed Gordon. He’s with a midsize firm, Huberth & Huberth, and says he’s looking to leave and start a brokerage. And maybe you should call him.’ And I did.

He was at 25 West 39th Street. I went over there and I interviewed for him. There was something about his charisma. He dressed beautifully. He had passion. He had a personality. He literally offered me a job on the spot. I’ll never forget, walking toward Fifth Avenue. I was like, bouncing. The opportunity that I would be the first man in. He was 12 years my senior, and my father had just died. I got very good vibes. So, I said to him, ‘I’m going to give this a try.’

At first, it was just Ed Gordon, myself, a bookkeeper, and a secretary.

Are there any moments that stand out early in your career?

Within about five or six months of my joining him, we relocated from a B-minus building to an A-plus building [450 Park Avenue]. We went to the 18th floor. I was physically next to Ed, facing Park Avenue. I didn’t want it to go to my head, but I said, ‘Oh my god, Park Avenue and 57th Street, six months into your career. Pretty good.’

Do you have any stories to share about Ed Gordon?

To announce that we were the agents for the Chrysler Building, Ed took the back page of the business section of The New York Times. He came up with a four-day advertisement campaign.

The first day, the entire back page was blank, with the exception of an inch of the spire of the Chrysler Building. So, people thought it was a misprint. The next day, they saw the full spire. The next day, they saw the top of the building. Then, the full announcement that ESG had been selected as the leasing and managing agents of the building, which was an incredible feat for us, because of its prestige.

And so, that was one of the memorable things: he was a tremendous promoter.

We became one of the major firms in New York, which, other than history, few people today remember. [Back then], it was Edward S. Gordon, Cushman & Wakefield, and Cross & Brown.

You’re now living in Palm Beach. How did you end up in Florida?

I’ve been coming here for 20 years, spending vacations and long weekends. But COVID made it happen, and I just happened to be in the right place. The hedge fund and private equity crowd has relocated to Palm Beach. Me and my colleagues at Newmark have been guiding them. It’s sort of easy to rub elbows with them, given how small the island is.

The finance crowd has brought so many younger people, who must be in their 30s, 40s, and 50s. Now, there are more trendy restaurants. I’ve spotted 10 new art galleries that didn’t exist a year ago. Retail is chasing the money.

What are your thoughts on New York? Do you think the city will bounce back?

I’ve lived in New York for 55 years out of my 73. New York is New York. It’s lasted way longer than you and I have. It’s going to continue. I firmly believe in the Big Apple.

This was a changing event for the world, but people tend to get back to their old habits. I want to be around people, connect with them and meet them in the hallways. I think that’s very important for any success to any business. The office is going to get back to where it once was in a few years from now.

I also don’t think you can replace New York and its restaurant, cultural, and business vibes.

So, even beautiful, sunny Palm Beach is no match for New York?

No match. New York will always be at the top of my list.

How does this COVID downturn compare to previous ones?

This is probably the most testing environment of my long career. This one just blindsided us, given how healthy the market was.

From memory, it’s worse than the 2008 financial crisis. Everything came to a stop, but deals came back very quickly and strongly. With COVID, we’re still waiting to see. Deals are happening, but not at the same intensity. People have to feel comfortable with where their businesses are heading before they commit. They’re not there yet.

What advice would you give to someone starting out in the business?

I repeat it all the time: Go with your passion, go with what God gave you. It won’t feel like work.

I keep a notepad next to my bed on my nightstand. I get up a few times a night with thoughts, whether it’s an idea, something about a project, or a reminder to call somebody. I’ll put it down. There’s always something to do, but it never feels like work.

I’m never going to retire. I enjoy the work as much today as I did 50 years ago.