NYC Workers Return to the Office, Despite Safety Concerns and Protests 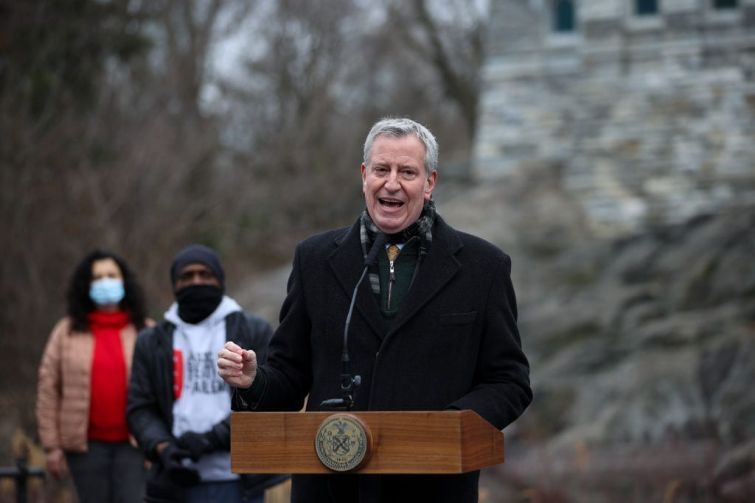 Around 80,000 New York City public workers started to return to the office on Monday, despite concerns and protests from staffers about the safety conditions of bringing employees back, while the city has seen new and more transmissible variants of coronavirus.

In a press conference, Mayor Bill de Blasio defended the decision, citing the fact that 6.6 million doses of the coronavirus vaccine have been administered to city dwellers. But hundreds of workers gathered at City Hall on Saturday to protest the return, demanding a permanent remote-work policy, broad exemptions, accommodations for in-person work, and transparency on the upgrades and policies as city employees head back to the office.

The mayor has said a return to work would be staggered, emphasizing social distancing and safe practices, according to NBC New York.

“There’s not a question in my mind people get a lot more done in person,” de Blasio said during a Monday press conference. “We need this. This is part of our recovery [and] we need it.

“Obviously anyone with a particular need can, and does, talk to their supervisor and we work with that, but let’s remember that 80 percent of our public workforce has been at their post doing this work throughout and doing incredible work for us,” de Blasio added. “This is our chance to take it to the next level.”

District Council 37, the city’s largest municipal union, and New York City Workers for Justice, an organization of municipal workers, both previously raised concerns over a safe return to work, according to The Wall Street Journal. New York Workers for Justice was particularly concerned with a lack of a clear, detailed return-to-work plan. The organization and District Council 37 did not immediately respond to requests for comment.

The mayor called attention to the Department of Citywide Administrative Services’ guide to return to work during Monday’s press conference. The guide includes best practices for a safe return, including daily health screenings, installing plexiglass in reception areas, establishing occupancy limits in shared spaces, having employees keep six feet apart, wearing a mask, regularly testing for COVID-19, and getting vaccinated. Around 180,000 city employees have been vaccinated against COVID-19, though a vaccine is not mandatory for them to return to the office because of legal concerns, according to NBC New York.

While the bulk majority of city workers do frontline work — like police officers or firefighters — and have been out in the field, the return to the workplace serves as a symbolic milestone for the city as employees trickle back to office buildings. And the city joined several other private companies that have started to reopen their offices after the forced closures during the pandemic.

But the reopening process for the city has come with some hiccups.

The Department of Design and Construction — the city’s primary manager of construction projects — promised to provide health screenings, hand sanitizer, cloth masks and wipes for returning workers, a city employee who did not want to give his name told Commercial Observer. But the process for a return to the office hasn’t been as transparent as the employee would like.

“I don’t know if I will be the only person there … or if there will be other employees present,” the employee said. “They haven’t been as transparent as they’d like people to believe. They were supposed to have masks for all employees waiting there today, but that hasn’t happened.”

The city has spent $206 million to get ready for municipal workers to return to their offices, according to NBC New York. But the city employee questioned whether it was wise to spend that money on in-person work, rather than spending it on other city needs. The mayor’s office did not immediately respond to a request for comment.

New York City had a 5.7 percent positivity rate this week, and Mayor de Blasio said last week that the city was on track for a full reopening by July 1, CO reported. Gov. Andrew Cuomo also announced that office capacity can expand to 75 percent starting on May 15.