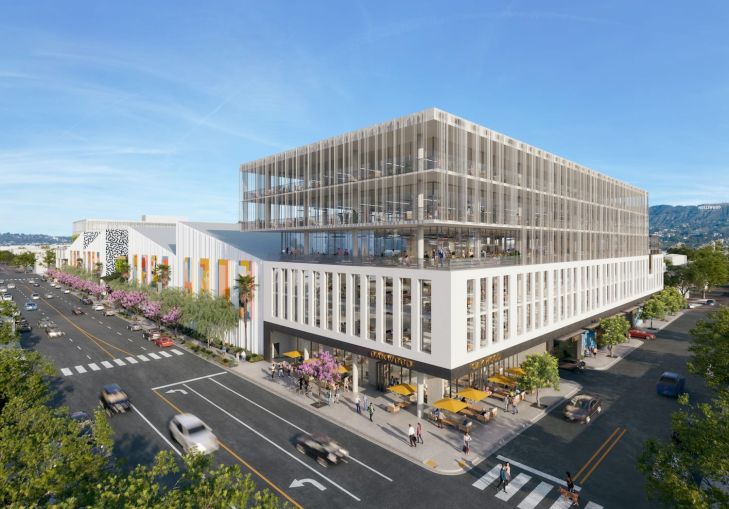 Echelon Studios will rise on a five-acre site at 5601 Santa Monica Boulevard. gcornfieldcommercialobservercom

“We believe the intense growth from the digitalization of content presents a compelling opportunity to create a uniquely integrated platform that partners with tenants to develop an unmatched experience,” said Joe Marconi, a managing director at Bain Capital Real Estate. gcornfieldcommercialobservercom
Previous Next

As demand from content creators like Netflix and Amazon continues to climb, a joint venture between Bain Capital Real Estate and BARDAS Investment Group announced that it filed plans with the city to build a $450 million soundstage project in Hollywood.

The firms have selected a five-acre site at 5601 Santa Monica Boulevard, between Western Avenue and Wilton Place, that formerly housed a Sears department store. The new Echelon Studios will include four 19,000-square-foot soundstages; a 15,000-square-foot flex stage; 350,000 square feet of creative space; and a 90,000-square-foot “creative village” of high-end bungalows. The investment firms also launched Echelon, a content media real estate platform that will serve as the brand for the joint venture.

“The increase in demand for new content and limited existing studio and production space is generating competition in the market,” David Simon, founder and managing principal of West Hollywood-based BARDAS Investment Group, said in a statement. Simon was previously an executive at L.A.-based Kilroy Realty, which is behind the $400 million Columbia Square media campus in Hollywood.

Bain Capital Real Estate, a unit of the Boston-based private equity giant, and BARDAS formed their joint venture in 2019 to acquire, develop and operate creative offices and production space targeted to companies in the content and media industry.

“We believe the intense growth from the digitalization of content presents a compelling opportunity to create a uniquely integrated platform that partners with tenants to develop an unmatched experience,” said Joe Marconi, a managing director at Bain Capital Real Estate.

To date, the joint venture has a pipeline of existing and new development projects with approximately 1 million square feet, including the 550,000-square-foot urban studio campus that is under construction at 712 Seward in Hollywood.

Entertainment, media, and tech industries have also been the biggest drivers in the L.A. office market. Since 2016, media and entertainment firms have increased their office footprint in L.A. by approximately 6.8 million square feet, with 64 percent of all office space in Hollywood being occupied by tech and media companies.

BARDAS is also in partnership with Beverly Hills-based Andell, which will begin construction next month on the Bungalows on Fountain, the adaptive reuse of an existing office building at the southeast corner of Fountain Avenue and Cahuenga Boulevard. The project calls for 38,000 square feet of new space to create a 60,000-square-foot building designed to meet the needs for media and entertainment tenants, slated to open in the fall next year.