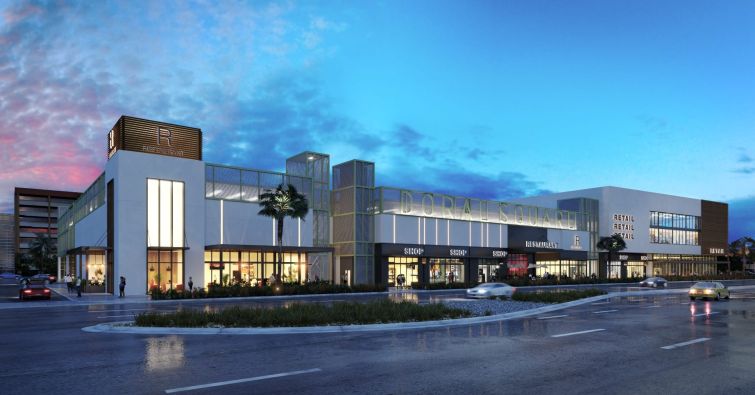 It’s out with the old, and in with the new, for Miami’s Doral Square retail center.

UFC Gym — a franchise chain owned by former MLB superstar Alex Rodriguez’s investment firm — is expanding into Miami with its fifth South Florida location. The gym will be filling a space previously assigned to 24 Hour Fitness, after the company filed for bankruptcy last year and announced it would close 130 locations nationwide.

The gym is taking 36,500 square feet at Doral Square, owned by David Martin’s Terra Group, which is expected to be completed later this year. Located on the southeast corner of Doral Boulevard and 87th Avenue, the 150,000-square-foot Doral Square has also signed anchor tenants, including Marshalls and Ross Dress for Less, as well as Panda Express and World of Beer.

A representative for the property declined to comment on asking rents for the long-term lease.

Rodriguez’s firm, A-Rod Corp., has acquired more than 15,000 residential units since its inception, and in 2017, the 14-time All-Star player made his foray into fitness with UFC-branded fitness centers. UFC has more than 150 fitness centers globally and four others in South Florida, including Kendall, Midtown and North Miami, and one opening soon in Pembroke Pines.

Terra’s Doral Square is nestled among other Terra properties, including the firm’s Modern Doral, a single-family home community, and Atrium Doral, a mixed-use development, according to The Real Deal. Terra paid $12.5 million for Doral Square in September 2017.

“We chose, specifically, the Doral market, because of the tremendous density that it has both from a residential, as well as a daytime working population,” said The Comras Company’s Jeff Evans, who brokered the deal on behalf of UFC. “[We] also have a familiarity with the developer. This was the same developer we’ve done a deal with in Pembroke Pines that is under construction now, knowing the quality product that Terra development would be bringing.”

Rod Castan of The Courtelis Company represented Terra in the deal. Castan did not immediately respond to a request for comment.

“Doral Square will be an exciting addition to the community, with tenants like UFC Gym catering to the everyday needs of surrounding residents,” Terra’s Martin said in a statement. “Doral Square will contribute to the City of Doral’s live-work-play environment by providing secure open-space amenities such as plazas, public seating areas and pedestrian promenades that promote walkability, connectivity and the pedestrian urban experience.”

UPDATE: The story has been updated since publication to remove a reference to District 79 being among Terra’s projects that surround Doral Square, as the property has been sold by Terra.