Sunday Summary: What Will a Bear Market Mean for CRE? 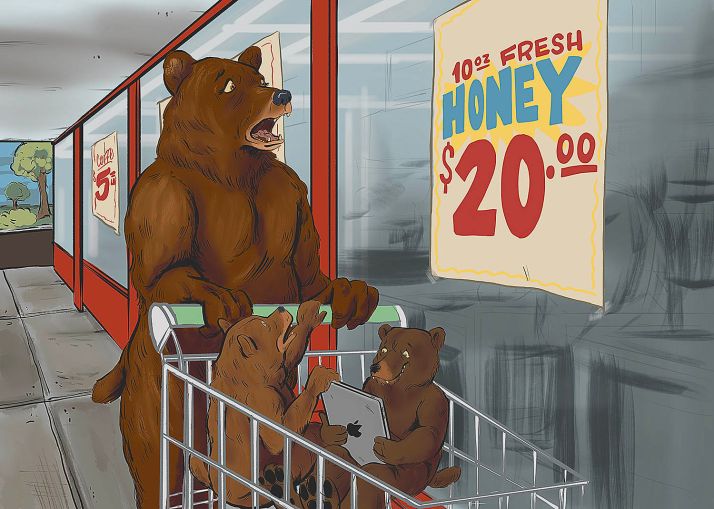 With a recession looming and inflation rising, real estate professionals are bracing for what many hope will be mild impacts. Illustration: Spencer Alexander

This was a pretty good week to ignore one’s stock portfolio — and the news in general, for that matter.

The Dow rode a roller coaster, the consumer price index rose 9.1 percent in June (more than was expected) and the average apartment rent in Manhattan broke $5,000 per month for the first time.

All in all, if you were on vacation on some tropical island with no Wi-Fi, you were probably happier than the rest of us, and not just for the most obvious reasons.

Of course, the party poopers over at Commercial Observer are always taking in the news and thinking about ramifications. Now that we’re talking more seriously about inflation and a possible recession, what will a big, hairy bear market mean for real estate?

Real estate’s problems are still being compounded by the fact that offices are still largely unused. The inevitable tightening of belts that go with a recession might include a critical look at all that fallow office space.

“The New York real estate market has in some ways come to resemble the African bush,” Michael Cohen, Colliers’ tri-state president, told CO. “There’s the predator and then there’s the prey. The predator is the many new buildings, major renovations, or in some cases just the buildings south of 34th Street that offer more artistic environments. And then there’s the prey: everything that was built between 1949 and 1979 or in some cases even into the early 1980s — buildings that suffer from horrendously inefficient infrastructure, a lack of common spaces, character and a 21st-century aesthetic.”

That sounds like kind of a lot of real estate. (But, then, pretty much every asset class is hitting treacherous waters, as per this week’s Green Street report.)

The sales go on!

None of this means that real estate is a commodity that isn’t still being traded.

And if you’re in, say, Florida multifamily, you’re transacting like crazy.

It was a big week for the developer on the West Coast, too, with the opening of Related’s massive Downtown L.A. project The Grand, designed by Frank Gehry. It was almost two decades in the making and cost billions. (Gehry was on hand to cut the ribbon.)

And industrial remains an asset everyone still wants to toast — to wit, Thor Equities Group and PFA (a Danish pension fund) purchased a 158,800-square-foot Anheuser-Busch cold-storage warehouse in L.A. for $85 million from Staley Point Capital and Bain Capital Real Estate. (This is particularly notable when considering that the property traded six months ago for only $35 million.)

In an even bigger project (at least in size, we couldn’t confirm the price), USAA Real Estate and development firm McDonald Property Group are building one of the largest industrial projects in the Inland Empire in the city of Beaumont. The site will be the manufacturing and distribution facility for New York-based United Legwear & Apparel Company and run a half-mile long, consisting of 1.8 million square feet of space.

There even remains some appetite for office transaction.

Plus, A&E just dropped a jaw-dropping $415 million on 160 Riverside Boulevard.

And in Alexandria, Virginia Burke & Herbert Bank & Trust Company, the oldest bank in the commonwealth, acquired a 110,047-square-foot office (known as the Kingstowne Ridge) for $22 million from The Halle Companies.

While some of the broader retail trends remain pretty worrying, it’s not all grim news out there.

Hospitality, for one, has seen an extremely sharp turnaround. In New York, for instance, revenue per available room (RevPAR) was down only 2 percent annually in May relative to the same time in 2019; moreover, RevPAR is expected to fully recover by the third quarter.

“The Manhattan market has been ramping up faster than everybody anticipated,” Lightstone’s Mitchell Hochberg told CO. “Below 23rd Street has seen a faster recovery, particularly in the last three months.”

That’s a good thing. Plus, beyond the general uptick in hospitality, there were leases. Some of them were fancy-pants companies like Hermès, which inked a 5,400-square-foot deal for a two-floor pop-up store at 91 North Sixth Street in Williamsburg, but the company is planning a permanent outpost in the neighborhood as well.

Some of the retail activity has been for grocery stores, like Lidl, the European discount supermarket, which just took 35,000 square feet at the Queens Place Mall in Elmhurst.

These positive retail developments traveled well beyond Gotham. In South Florida, River Oaks Property purchased a strip mall at 8918 W Atlantic Avenue in Palm Beach County from Schmier and Feurring Properties for $25.5 million, and RPT Realty bought the 541,449-square-foot The Shops at Mary Brickell Village mall in Miami for $216 million (making it one of South Florida’s most expensive retail deals thus far in 2022).

In Orlando, a joint venture of Andes STR and WEG Capital raised $25 million to buy up single-family homes that the JV plans to turn into vacation rentals on Airbnb and VRBO. (Even illegal Airbnbs are raking in the bucks; so much so that New York City is bringing a lawsuit against real estate broker Arron Latimer alleging six of his properties scored $2 million in fees.)

In the D.C. area, Klein Enterprises plunked down $130 million to reel in nine grocery-anchored shopping centers in Maryland, Virginia and Pennsylvania. (D.C. is getting in on the fast food action, too; last week Pupatella, the popular Arlington-based Neapolitan pizza slinger, announced a new location in Chantilly, Va.)

And, while malls have been a notoriously hairy problem for retailers in the last few years, there was positive news on that front as well from the Sunshine State: The 360,000-square-foot River Landing mall in Allapattah, which opened at the very worst possible time in 2020, is now pretty much fully leased.

For a long leisurely Sunday read

You know who isn’t so worried about office, work from home and the other trends that make brokers gnaw their fingernails down to a nub?

“Many of our clients are in the office three or four days a week,” the head of Boston Properties (the country’s largest publicly traded office-focused REIT) told CO in a lengthy cover story in this week’s issue. “Many of them are mandating that everybody be in the office on certain days of the week. So it’s hard to reduce space when that occurs.”

“We do not need to radically change our strategy,” Thomas declared.

But for his full take you should read the interview here.