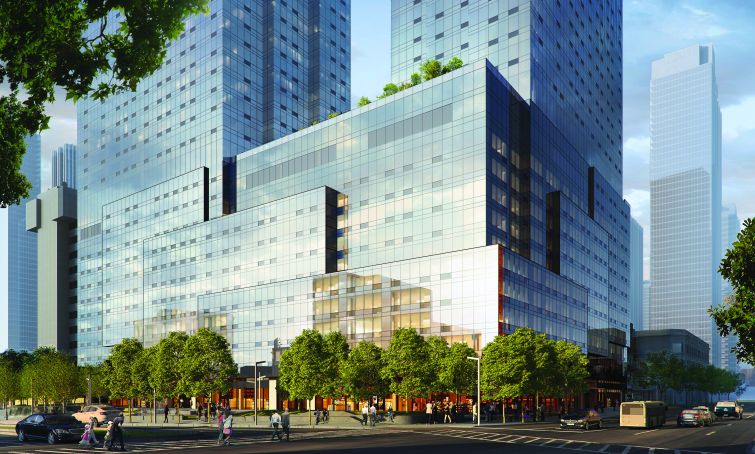 Big construction loans are few and far between these days, but a recently closed $515 million financing in Jersey City, N.J., shows that there’s still capital available for the right deals — even in the most volatile of capital markets.

Kushner Companies’ long-awaited residential project at 1 Journal Square spans 2 million square feet, making it the company’s largest residential development thus far as well as the largest in Jersey City to date. Its two 52-story glass towers comprise 1,723 rental units and feature views of the Hudson River and the Statue of Liberty, while a 12-story, 40,000-square-foot retail podium sits at the towers’ base.

The project has been eight years in the making. The developer finally broke ground June 16, with Jersey City Mayor Steve Fulop announcing via Twitter that Target would be 1 Journal Square’s retail tenant, adding: “It’s been a complicated project for sure, but we’re finally here.”

The construction financing closed on the day of the groundbreaking, and is divided into two tranches of debt: AIG provided a $385 million senior loan, while Related Credit Funds took the $130 million mezzanine spot.

In a period of prolonged uncertainty, lenders have indeed gravitated toward developments with seemingly crisis- and recession-proof blueprints. So it’s not hard to see why a multifamily project with top-tier amenities and a brand-name retail tenant occupying its base ticks a lot of boxes.

“[Multifamily] is the asset class where people are most comfortable providing capital. It’s been proven over and over, and therefore lenders are very comfortable that there will be an exit for them,” Morali said. During the 2008 great financial crisis and COVID-19, multifamily was the only asset class that Kushner Companies built, he said.

As such, both the senior and mezz tranches were the subject of fierce competition within the lending community, Morali said.

With borrower-lender relationships being more critical than ever now, there was also familiarity in the financiers’ corner. Kushner Companies has completed more than $500 million in financing with AIG over the last couple of years alone, including the construction financing for its residential towers at 2000 Biscayne in Miami last November. Further, both AIG and Related have deep experience in Jersey City financings.

Amid the most tempestuous markets in recent history, horror stories about lenders changing deal terms at the very last minute or walking away from transactions altogether have begun to surface. But that wasn’t the case at 1 Journal Square, Morali said.

“These two lenders were extremely honorable,” he said. “They did not change anything — neither the proceeds nor the rate.”

Cash is king, and the deal includes plenty of equity, too, with the balance of the estimated $1 billion project cost covered by Kushner Companies plus two family offices Morali declined to name.

The beginnings of 1 Journal Square go back several years, with some twists and turns along the way.

Kushner Companies first acquired the then-vacant site in 2014 with partner KABR Group, entering into a redevelopment agreement with the Jersey City Redevelopment Agency. Another partner in the deal at the time was WeWork, which planned to build a
WeLive coliving tower at the site — so, one market-rate tower, and one WeLive tower. Kushner Companies ended up buying out both partners amicably within five years, Morali said.

At the time, WeWork was still figuring out what WeLive apartments would even look like. “They came to us and said, ‘Look, we’re slowing you down, take us out,’ ” Morali said. “So, we bought them out at cost.”

Eventually, 1 Journal Square would also find itself in a qualified opportunity zone, although Kushner never took advantage of that designation.

The project was also at the center of a public feud following a lawsuit filed by Kushner Companies in 2018, which alleged that Mayor Fulop was attempting to derail its progress due to former company principal Jared Kushner’s connection to then-President Donald Trump (Kushner is Trump’s son-in-law). The lawsuit was settled in October 2020, with Fulop stating that “the city’s great team and Kushner Companies have been able to set aside their differences and collaborate to reach common ground.”

Now, 1 Journal Square is off to the races, and the project is one of many notable additions to Jersey City. Last June it was announced that Centre Pompidou, one of France’s best-known art institutions, had chosen Jersey City — a site right next to 1 Journal Square, specifically — as the location of its first North American outpost.

“We’re going to be surrounded by art,” Morali said. “We will have the museum on one side, and on the other side we have the Loew’s Theater — which is where Frank Sinatra started his career, and it’s being refurbished. The mayor announced that they’re going to spend $95 million to refurbish it. Then, a short seven minutes walk away, you have Mana Contemporary. So it really is a hub.”

Its transit-friendly location across from the Journal Square PATH station to Manhattan is a big plus. The development team hopes it will also benefit from sky-high Manhattan rents, drawing renters across the Hudson River instead.

“Our apartments are going to be 50 percent more affordable [than Manhattan equivalents],” Morali said. “And, because of the connectivity and the transportation, they’ll be able to attract all of the New York metro area. We’ve been investing in Jersey City for 13 years and it’s always been about easy access and transportation. It’s basically 50 percent of the cost of Manhattan living for the same, fully amenitized product.”

The amenities package is one thing that will set 1 Journal Square apart from its competitive set, Kushner president Nicole Kushner Meyer said. “We provide a quality of living and service for our residents in all of our projects. So, for us, it started with creating a really robust and beautiful 40,000-square-foot amenity package. We’ve envisioned a lifestyle here that does not currently exist within the Jersey City market, and we really prioritize those amenities spaces for our residents to enjoy.” (Disclosure: Meyer is married to Joseph Meyer, chairman of Observer Media, which owns Commercial Observer.)

Plans for those amenities evolved along with residents’ changing needs and preferences over the course of the pandemic.

“We were able to expand upon our amenities offering and we now have podcast rooms, conference rooms, libraries, and we even have studios that include a den so that people can have a little bit of a workspace, so there’s a different quality of life aspect that we’ve introduced,” Meyer said.

“We saw the potential in the site starting in 2014 and the [goal] for us is really to make this incredible project the crown jewel of Jersey City, and to revitalize the area,” she added. “For us, as developers, we feel very lucky to have the opportunity to make an impact and transform the neighborhood.”