New York City’s Hotels Are Coming Back From the Pandemic

The recovery isn't without complications, though, with business travel lagging and labor a headache 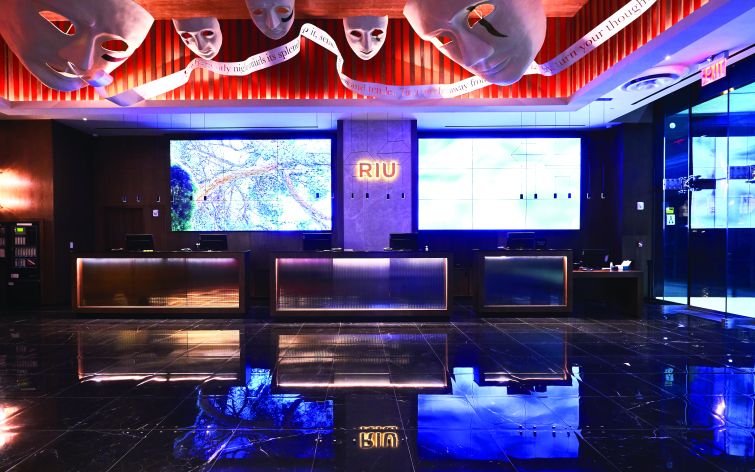 New York hotels such as the Hotel Riu Plaza Manhattan Times Square are benefitting from a tourism increase, but are still awaiting a fuller return of business travel. Photo: Courtesy Riu

New York City’s hotels took a hard hit from the global pandemic. As tourists gradually return to the city, though, investors are banking on the hotel market being one of the most profitable sectors once again.

“The Manhattan market has been ramping up faster than everybody anticipated,” said Mitchell Hochberg, president of Lightstone, which owns Moxy-branded hotels in multiple locations in the city, as well as in Los Angeles and Miami.

“Below 23rd Street has seen a faster recovery, particularly in the last three months,” added Hochberg. That said, the hotelier thinks people are still a little afraid of what’s going on from a crime point of view. “Times Square has definitely lagged given the lack of residential presence and the slow return to corporate offices. It’s not that they’re not doing well. They’re not doing as well.”

Recent sales of Manhattan hotels highlight Hochberg’s point. The Hilton Times Square hotel on 42nd Street is known for its unobstructed views of the city — but it also became known for its purchase price. Apollo Global Management and hospitality investor Newbond Holdings bought the 478-unit inn in June for roughly $85 million, per the Wall Street Journal, only slightly more than one-third of its $242.5 million sales price in 2006. The hotel is now poised to reopen under new ownership after closing two years ago.

Another Times Square hotel, the 1,780-room Sheraton New York Times Square Hotel, was purchased by MCR Investors in May for $323 million, according to property records. It was the second-largest single-asset U.S. commercial real estate transaction so far in 2022, but its valuation was slashed compared with its $738 million purchase price in 2006.

Both Times Square Edition and Cambria Hotel were up for sale in 2021. Hotels that haven’t changed hands were trading at bargain prices: The venerable Empire Hotel on West 63rd Street is now worth just $173 million, down from $393 million in 2012, according to CMBS tracker Trepp.

“Obviously, it was a bit brutal for us and everyone else,” said Michael Achenbaum, president and founder of Gansevoort Hotel Group.

However, with a glass-half-full mindset, hotel owners, investors and analysts in the city are managing to find the silver lining even with a potential recession forecasted. “The hospitality industry has been in a recession since COVID. And it’s just starting to emerge from recession,” said Jeffrey Davis, senior managing director and co-head of investment sales at JLL. “So maybe the hospitality industries are a step ahead of the other industries because we got hit so hard by COVID.”

Some hospitality sectors have performed better than others. Luxury hotels in the city have fared particularly well, according to data from JLL, with revenue per available room (RevPAR) down only 2 percent annually in May relative to the same time in 2019. RevPAR for luxury hotels in New York City is expected to fully recover by the third quarter of this year.

“There are about 15,000 hotel rooms in the pipeline that will open up in the next three years,” Hochberg said. “A significant amount of the supply is luxury. Almost a quarter of it. I think the city is really due for some new luxury hotels.”

The pain of the hospitality industry has a lot to do with business and leisure travel grinding to a halt during the pandemic, but the city saw leisure travel begin to rebound in the first quarter of 2022. “We’ve seen a lot of positive momentum in fundamentals for hospitality across the country,” Davis said “The leisure segment of the industry was the first to show positive signs of recovery and that’s been quickly followed by the group and convention business, which has been surprising to most. And now everybody’s eyes are on business travel — when will business travel come back and how quickly will business travel recover?”

According to a report issued at the end of April by the American Hotel & Lodging Association and Kalibri Labs, a full recovery for business travel — the largest source of revenue for the U.S. hotel industry — is not expected before 2023.

“We need people staying in our hotels, dining in our restaurants, and going out to our bars, enjoying our nightlife, for New York City to fully recover from the pandemic,” said Andrew Rigie, executive director of the New York City Hospitality Alliance, an association representing restaurants and nightlife venues throughout the five boroughs. “We need to be cautiously optimistic. There are a lot of complex pressures that make the recovery difficult.”

CBRE recently raised its forecast for New York City hotel performance for 2022 and beyond, based on first-quarter 2022 strength, continued slowing of construction activity, higher inflation, and optimism about employment and economic growth. The forecast projects a 29.7 percent growth in the average daily rate (ADR), a 41.8 percent increase in demand and a 75.06 percent increase in RevPAR in 2022 alone.

“I believe the CBRE report is really focused on top-line money more than occupancy rate. That’s a precursor to making money,” said Steve Carvell, professor of finance at the Cornell SC Johnson College of Business. However, could the hotels accommodate this surge in demand? “This is two years of carrying debt service that sometimes has been in forbearance until now, hotels that are in dire need of furniture, fixtures, equipment, renovations. And the cost of those renovations are going to be much higher than we had thought budgeting for just a couple of years ago,” Carvell said.

The surging cost is trickling down to all business aspects, Rigie said. “Inflation created a lot of different challenges. It’s created challenges for restaurants, bars, nightclubs and hotels because the costs of all their products have skyrocketed, the cost of labor has skyrocketed, and that’s impacting businesses.”

Inflation could be a double-edged sword for the hotel section. “Hotels are a great investment class to be in when we’re in inflationary times because we’re able to reset our rates every single night,” said Davis. “And, so, while we benefit from inflation at the top line, what we need to manage is the expense side of things. Because if labor costs get too crazy, it eats into the profitability of a hotel, even with the ability to change the rate every night.”

Hotels in the city are suffering from a persistent hiring crisis. “People really want to work from their homes now. They got used to it,” said Achenbaum. “There’s a trickle-down throughout the entire hiring process where you’re battling people’s desires to work in a way that, as an employer, you’re not used to as well. And we have to find that balance that works for both us and the employee.”

There are other factors, too.

“The low level of unemployment has made it very difficult to find lower-level employees, especially with the limited amount of immigration that’s been occurring in the last few years. That’s not helpful, either,” Achenbaum said.

“Hotels in general, certainly ones in big unionized cities, have to decide how many people to bring back, how to bring them back,” Carvell said. “Many hotels are struggling to find the staffing to manage that level of occupancy.”

Looking into the next 18 months, some are opportunistic while others are worried. “I’m predicting a very strong fourth quarter for hotels in New York City,” Davis said. Removal of pre-arrival COVID testing requirements for inbound international travel should further boost hotel demand and is expected to accelerate the city’s recovery more broadly, according to a report from JLL.

“We are due for some shakeout still,” said Carvell. “We have hotels that are in forbearance, meaning that they haven’t made all the debt payments and that they’re backed up. You will find hotels that are going to wind up possibly being split up into smaller, independent hotels, or being bought off and turned into apartments.” Data from CRED iQ shows that New York ranks seventh among the top 20 distressed markets for CMBS lodging loans.

“Perhaps society has gone into a place in the pandemic where they realize you’re going to have to be living with this uncertainty for the unforeseen future and continue to live our lives the best we are able,” Rigie pointed out, adding that although things are hard right now people continue to have faith in New York City.

“In general, we are big fans of New York,” said Lightstone’s Hochberg, “and we obviously have shown that with the significant investment we put in. I think long-term New York will still be one of the strongest hospitality markets in the country.”