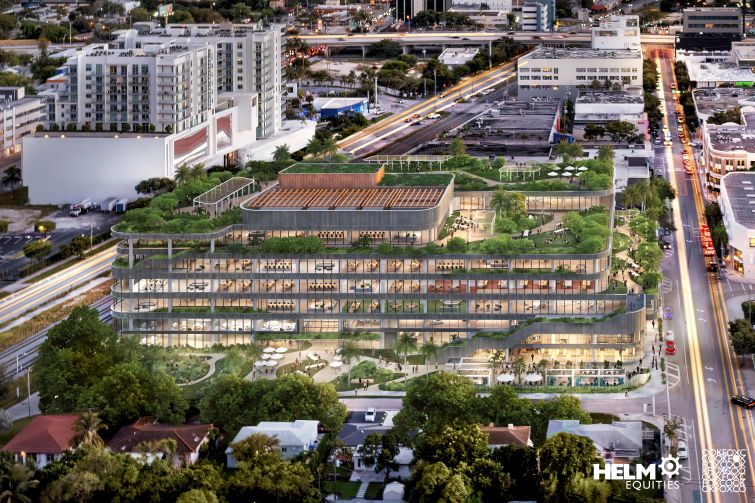 More office space is in the works to feed the growing demand in Miami with the $300 million development of Parterre 42, a 500,000-square-foot office and retail building in the Design District.

New York City-based Helm Equities, an affiliate of JEMB Realty, commissioned COOKFOX Architects to design the five-story building with floor plates ranging from 70,000 to 86,000 square feet. The building will also include up to 80,000 square feet of outdoor space that will bring fresh air to every level of Parterre 42, according to the developers.

“We worked with COOKFOX to turn the typical office building inside out, incorporating massive amounts of functional outdoor space on every floor so that occupants of Parterre 42 feel like they are truly working in nature,” Ayal Horovits, principal at Helm Equities, said in a statement.

The design of the 320,000 square feet of office space is a departure from the steel and glass pillars expected of office buildings, according to architects, and will appease the post-COVID era sensibilities of workers.

The building will infuse the Design District, best known as a swanky retail and arts destination, with much-needed office space. In March, Craig Robbins, the original Design District developer, announced plans to develop the area’s first new Class A office building, with 180,000 square feet of office space. A second project from the Robins-led developer Dacra, which owns most of the commercial property in the district, would add a 20-story office building and is undergoing a zoning battle.

Some of the amenities that will be offered to tenants include an indoor-outdoor cafe, landscaped gardens on multiple floors, a rooftop event space, a fitness center, bike and scooter storage and valet parking.

Parterre 42 will be LEED Gold- and WELL Gold-certificatied with sliding glass doors to connect indoor spaces to terraces that will be equal in size to what will be available indoors, according to the developers.

The office space will be marketed by a CBRE team of Paul Amrich, Neil King, Gordon Messinger and Cameron Tallon.

The news comes as second-quarter research from Colliers shows that demand for office space in Miami-Dade County has kept pace with the amount of development in the area, posting an 11 percent vacancy rate, similar to the first half of 2021 when it clocked in at around 11.3 percent.

Retail tenants will be surrounded by luxury brands and showrooms such as Louis Vuitton, Dior, Gucci, Design Within Reach, Waterworks, B&B Italia, Jonathan Adler and The Shade Store.