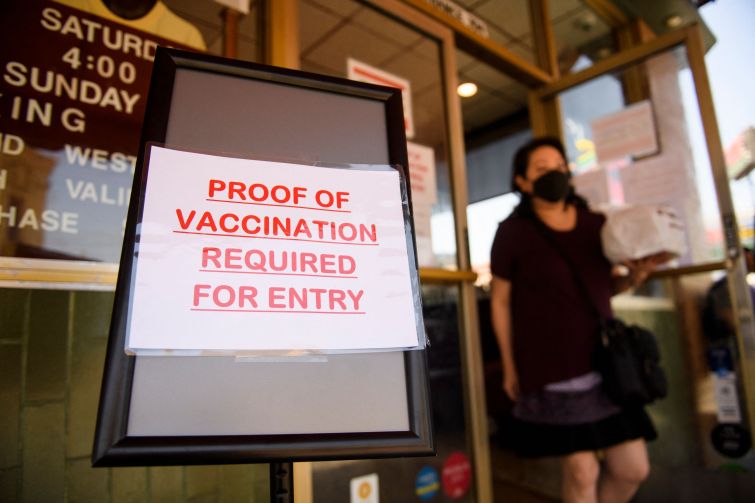 It’s one of the salient features of contemporary life: a lot of jabber about vaccines. What once seemed boringly uncontroversial (who among us hasn’t gotten jabs for polio, measles, mumps, rubella, hep A and B, etc.?) is now glaringly divisive. And that matters. Big time.

Because a lot of office-based companies and other private businesses don’t want folks not vaccinated against COVID entering their premises. In fact, ever more are mandating vaccines for their own workers and requiring proof of vaccination for others. A lot of companies and businesses had been relying on the honor system to check.

That’s so six weeks ago, though. Now, there are a growing slew of apps that make checking COVID vaccination status via smartphone easier than opening a cryptocurrency outpost in Miami (which is becoming exceedingly simple, apparently). The apps aim to be apolitical and easy to use.

Last week saw the departure of everyone’s favorite reminder of the dangers of nepotism as Andrew Cuomo left New York’s governorship in a blaze of denial and self-congratulation. It was the perfect time to look back at the good, the bad, and the just plain ugly of his 10 years in trying to imitate master builder Robert Moses.

The new governor, Kathy Hochul, hit the ground running with an aggressive agenda, particularly when it comes to aid for residential landlords and tenants grappling with the pandemic’s fallout. Lord knows it needs some attention.

Hochul also named State Sen. Brian Benjamin of Harlem as her replacement as lieutenant governor. Benjamin, who was a managing director and consultant at an affordable housing developer, will be the first statewide official with experience in the real estate sector since Richard Ravitch served as lieutenant governor from 2009 to 2010.

In the meantime, deals!

Stop us if you’ve heard this one before: A hedge fund and an investment firm walk into a Manhattan skyscraper … You have? Well, the deals at Rudin’s 41 Madison Avenue were certainly new last week. (Speaking of Rudin, media and entertainment company Vice Media is looking at several floors in Brooklyn’s Dock 72, which Rudin developed with Boston Properties.)

There were a lot of other leasing deals, too, including at 639 11th Avenue, 300 Park Avenue South, and 22 Cortlandt Street. And, at 745 Fifth Avenue, where a French investment house doubled its space and then some.

The week also saw some mammoth sales. These included Nuveen’s $60 million buy of warehouse space in California’s Inland Empire and CenterPoint’s $119 million acquisition of a warehouse 3,000 miles away in the Bronx.

Everyone loves warehouses these days, including proptech firms that facilitate leasing footprints smaller than your typical Amazon expanse.

Financing continued to flow last week as well, with nine-figure deals not uncommon. Take the $215 million refi at 1450 Broadway, or the $300 million in construction money for a major mixed-use project in Alexandria, Va., or the $102 million debt package for an apartment complex in Tampa.

The most titanic of last week’s financing deals, though, involved — who else? — Blackstone. An affiliate of the investment giant received a $985 million package co-originated by JPMorgan Chase and Goldman Sachs for a portfolio of Motel 6 and Studio 6 properties.

In hospitality, hotel chain citizenM is expanding with development deals in urban areas, such as Miami and Washington; and Commercial Observer talked last week to the executive behind the plans, which are driven by a belief that hotels in city centers will rebound.

It wasn’t all smiles und sunshine, however. A new Cushman & Wakefield report showed that tour activity as far as prospective office tenants was up to 80 to 90 percent of its pre-pandemic levels. So, not quite a recovery, much less any growth. And another report, from CoreNet Global, was pretty blunt about return to office: Even a lot of people working in the real estate industry itself say their companies are delaying coming back.

Finally, to end on a positive note of sorts: In a plot worthy of an `80s movie, two teenagers in Brooklyn are trying to save the shuttered Grand Prospect Hall from being demolished.