First Mile to Last Mile: Proptech and the Warehouse Shortage

What do companies do when they only need a few thousand square feet for storage and distribution? 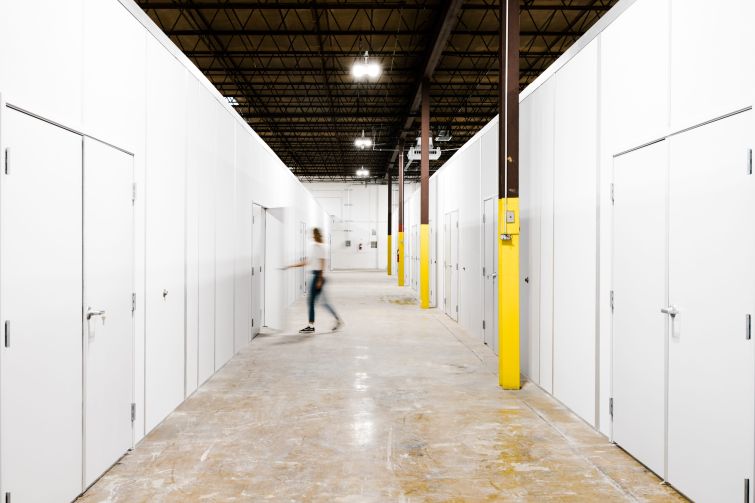 A Saltbox location in Atlanta. Photo: Michael Giardina via Saltbox

It is not news that there’s a severe housing shortage in the U.S. right now. However, the explosive growth of e-commerce during COVID has also created what is arguably a much worse shortage of warehouse space for retailers, ranging from Amazon to local mom-and-pop operations and everything in between.

Unable to build enough warehouse space to meet demand, e-commerce is turning increasingly to proptech to solve what might be called the “first-mile-to-last-mile” warehouse challenge.

The first mile of this challenge involves giant retailers like Amazon, Home Depot and Walmart, which are capable of buying, leasing, and building huge amounts of capacious warehouse space across the country to meet their product storage and shipping needs. Smaller retailers don’t need and can’t afford to compete with those giants, and require other warehouse solutions.

However, all e-commerce companies, even the Amazons of the world, are struggling with the warehouse supply chain journey from first to last mile.

For context, Prologis, the largest owner of industrial real estate in the U.S., said in a May report that utilization rates, which indicate how much space is being used, reached close to 85 percent. Vacancy rates are at 4.7 percent, close to a record low, Prologis said. Amazon is the real estate firm’s biggest customer, occupying 22 million square feet, followed by Home Depot at 9 million, and then FedEx and UPS, according to Prologis’ latest annual report. Walmart is seventh.

As Wright explains it, although there is an overall warehouse space shortage, there are hidden amounts of unused space, even in warehouses that landlords consider 100 percent leased. The average warehouse is 150,000 square feet, but often tenants find themselves with unutilized space, due to a dip in demand or the loss of a customer. This creates a “gray market” of warehouse space that is the focus of Chunker’s business.

While companies look for warehouse space from industrial brokers, who only see the sub-5 percent vacancy that landlords tell them about, Chunker works with the tenants to stem the financial loss on their unused space, giving them the ability to do a short-term sublease that they didn’t have previously, he said. In addition, the company can work with industrial brokers who might otherwise find subleasing excess space not worth their time and effort.

“On Chunker, it’s 10,000 square feet that we could fill up tomorrow with a company from Walmart on down, who just happens to need short-term space for some sort of project, or overflow, or something that they have that’s a short-term problem and [for which they] don’t want a long-term solution. They don’t want to go lease a warehouse for a six-month problem.”

Tyler Scriven, co-founder and CEO of Saltbox, which bills itself as a co-warehousing company that provides logistics and coworking amenities for smaller businesses, said he saw the warehousing challenge back in 2016, when he acquired a consumer product goods business. At the time, his business primarily sold its products through retail channels, but “my goal was to shift the model and to move more aggressively into e-commerce,” Scriven said.

He recognized then that with the explosion of e-commerce, the warehousing paradigm was evolving from a small number of big companies needing space to an increasingly large number of small companies with different needs.

“If I’m a small business and I need a 500- to 1,000-, or a 5000-square-foot warehouse, guess what. It doesn’t really exist in this country. And, so, we chose to begin there, building that physical infrastructure,” he said. “Saltbox is effectively a distribution facility for small business.” In turn, he added, such small businesses are often shipping into distribution facilities and much larger businesses, such as Amazon, as part of the overall first-to-last-mile supply chain.

In order to provide flexibility for small businesses, Saltbox has warehouses ranging from 30,000 to 66,000 square feet and plans to complete a 110,000-square-foot facility by the end of the year, said Scriven. However, individual suites for customers range from 300 square feet to 8,000 square feet, averaging about 1,000 square feet.

Scriven likens Saltbox’s model to that of hotel companies like Hilton that generally operate, but don’t own their properties, which are usually owned by REITs. Similarly, Saltbox is partnered with institutional real estate firms that are buying industrial assets for the company and capitalizing the facilities’ improvements based on the proptech startup’s designs and building specifications.

“Our mission is to solve the totality of the operations and logistics needs for our customer,” Scriven said. “That means one ought to be able to literally start [a business] at Saltbox, as many companies do, or scale from a basement or garage to Saltbox to a pretty significant scale, with us enabling their logistics across the board,” including providing fulfillment services to companies housed in, or outside of, Saltbox flex spaces, many of which are located close to the customer’s business, making the facilities more accessible.

Not surprisingly, Chunker and Saltbox saw demand for their proptech grow exponentially as a result of COVID, both CEOs said. Sustaining that growth post-COVID, as foot traffic at brick-and-mortar stores picks up, is a question mark.

“I would say for certain that COVID accelerated our business simply as the result of e-commerce demand growth,” said Scriven, who opened his first location in December 2019 and will have more than 500,000 square feet of space by year-end 2021.

“The pandemic actually helped us a lot,” Wright said. “It accelerated our business by five years.”

Saying that Chunker is designed to be a “self-service” online platform, Wright cited an example from a few weeks ago, when a 70,000-square-foot warehouse outside Los Angeles was listed on Chunker.

“Southern California is the tightest market in the world for warehouses,” said Wright. “I actually called the guy up and I said, ‘How did you hear about us?’ And he said, ‘Oh, I just googled, What do I do with spare warehouse space?’”

“That’s the thought process change. Because, they never [could] do that before. I mean, who would google that?” he added.