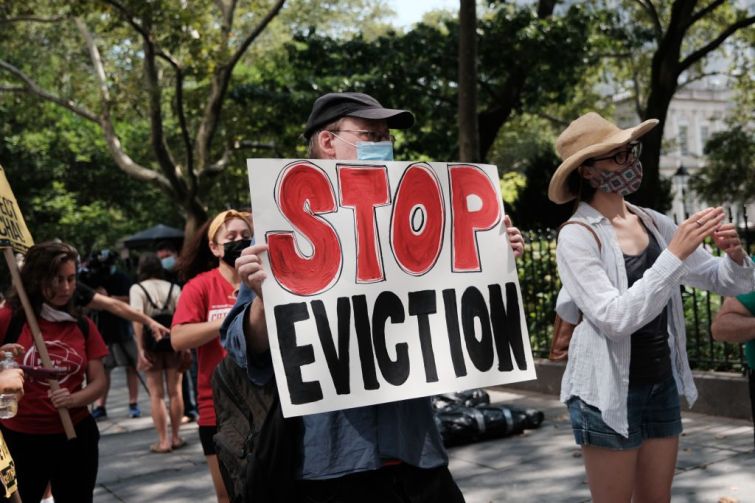 Hundreds of thousands of tenants in New York City are behind on their rent as the state has only distributed federal rent relief money to 7,000 households. Photo: Spencer Platt/Getty Images

New York has only distributed about $100 million worth of federal rent relief payments — out of its $2.4 billion pool — to 7,000 cash-strapped families, according to a new report from State Comptroller Thomas DiNapoli on the rollout of the state’s botched rental relief program.

The Emergency Rental Assistance Program (ERAP), which started taking applications on June 1, can provide up to $15,000 for families to cover 12 months of back rent and utility bills accrued during the pandemic.

However, New York has paid out its federal rent relief money at a snail’s pace, and risks forfeiting the remainder of the funding if it hasn’t distributed 65 percent of the pot by Sept. 30. On July 21, it was the only state in the nation that hadn’t distributed any of the funds that Congress had allocated to it in April. After Sen. Chuck Schumer slammed Gov. Andrew Cuomo for the delay, the Office of Temporary and Disability Assistance (OTDA), which is charged with sending out the money, finally began mailing out checks.

The delays in distributing ERAP money have also come as the Supreme Court lifted part of New York’s eviction moratorium, raising fears that tenants who are behind on their rent will face eviction proceedings in housing court.

The state expected the program to serve 170,000 to 200,000 low-income households. Eligible residents include those who are behind on their rent and have received unemployment benefits, experienced a reduction in income or an increase in expenses because of the pandemic. They must also earn less than 80 percent of the area median income, which is $95,440 for a family of four in New York City.

Roughly 26 percent of renters in New York City and its immediate suburbs are behind on their rent and an estimated 875,000 low-income households in the five boroughs were rent-burdened even before the pandemic struck, according to the comptroller’s report. Hispanic and Black tenants also make up disproportionate shares — 37 and 27 percent, respectively — of low-income renter households in New York City, and have experienced higher rates of unemployment than other racial or ethnic groups since April 2020.

In June 2021, Black households in New York State were the largest demographic group in rent arrears, at roughly 149,000 families who had fallen behind on their rent. Hispanic tenants were the second largest group, with 82,450 households.

The comptroller’s office charged that the city and state needed to do more to simplify the complex, online rental relief application, which tenants have struggled to navigate because of technical glitches. The state also needs to ramp up its outreach in low-income communities in New York City and elsewhere, the report argued. Even though the five boroughs are home to 517,000 households who earn less than 30 percent of the city’s area median income ($35,790 for a family of four), the state has only received 114,245 applications from households in New York City, and 53,986 applications from elsewhere in the state.

The first round of federal rent relief, which was distributed by the state during the summer and fall of 2020, was also lackluster. Relief checks only reached about 15,000 people, out of 94,000 applicants.

“If the first round of rent relief provides any cautionary tale, it is that some renters in need of help get left behind when the process is complicated and when tenants are left without proper outreach and assistance,” the report noted. “These challenges may worsen, as many more could apply in the fall when the statewide moratorium on residential and commercial evictions ends August 31, 2021. Enhanced unemployment benefits will also expire the week ending September 5, 2021. The OTDA must ensure that the agency and its partners across the State are well-informed and prepared so that it can accelerate the disbursement of funds to those households in the greatest need.”

The ODTA, for its part, said it had now distributed 8,305 payments totaling $114.1 million to landlords. The agency has also obligated—or formally earmarked—$525 million in ERAP funding for tenants.

“The Comptroller’s sensationalized report doesn’t take into consideration the present reality of New York’s Emergency Rental Assistance Program, which has already distributed or obligated more than $638.8 million in critical assistance and provided eviction protection to more than 158,000 tenants, including 38,000 who have had their applications provisionally approved,” a spokesman for ODTA said in a statement.