But at what cost? 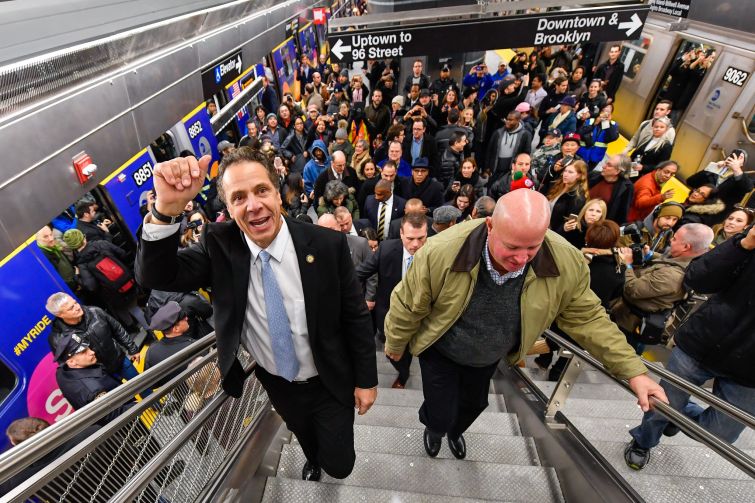 Andrew Cuomo liked to compare himself to Robert Moses.

The record is mixed, though, as to how New York’s 56th governor — who officially resigned Monday night amid multiple sexual misconduct allegations, a criminal complaint related to those allegations, and a federal investigation into his administration’s handling of COVID-related nursing home deaths — measured up against the controversial master builder of their shared New York City. Cuomo did build a lot that needed building, but how, and at what cost, remains controversial.

He replaced two major bridges: the Tappan Zee (which he renamed the Mario Cuomo Bridge, after his father) in the Hudson Valley and the Kosciuszko in New York City. He has rebuilt much of LaGuardia Airport, and had started work on new terminals at John F. Kennedy International Airport as well.

He extended the Q train three stops on Manhattan’s East Side to create the first phase of the Second Avenue Subway, in what turned out to be one of the most expensive transit projects per mile in the world. And, more recently, he oversaw the renovation of part of the Farley Post Office building into Moynihan Train Hall, which gives Amtrak and Long Island Rail Road passengers an alternative to waiting for and boarding trains across the street at Penn Station.

The new Tappan Zee Bridge, which connects Nyack to Tarrytown across the Hudson River, was completed in 2018 at an estimated cost of $4 billion. However, the real cost may end up being closer to $5 billion, after the design-build team that worked on the project sued the state earlier this year for $961 million in additional costs associated with bad weather, a crane collapse and numerous changes requested by the state officials during construction.

And documents released as part of a related whistleblower lawsuit raised questions about the bridge’s structural integrity — specifically in regard to the bolts that hold it together — and whether the state and its contractors knew about bolts breaking during construction, according to the Albany Times-Union and NBC New York.

To top it all off, some locals and state legislators want Mario Cuomo’s name removed from the bridge. An online petition with more than 250,000 signatures in support of bringing the bridge’s original name back has been circulating online for a few years. State Assemblyman Mike Lawler introduced legislation earlier this month calling for the bridge to be renamed the Tappan Zee.

Mitchell Moss, a professor of urban planning and director of the Rudin Center for Transportation Policy and Management at New York University, felt that despite his failings, Cuomo had succeeded in becoming one of the most prolific builders in New York history.

“We had DeWitt Clinton, Nelson Rockefeller, and then we had Andrew Cuomo,” said Moss. “A governor has only a handful of ways to make an impact. You have social policy, like same-sex marriages, and then you have infrastructure, which is going to be a major part of this country for a long time. The governor has been responsible for building infrastructure that will be important for the rest of the 21st century.”

The transit guru praised the completion of the new Kosciuszko Bridge, which opened in 2017 and replaced an old steel truss bridge from 1939. The Kosciuszko not only connects northern Brooklyn with southwestern Queens, but it also forms part of the Brooklyn-Queens Expressway and Interstate 278, one of the most heavily traveled routes in the five boroughs.

“It’s a very important arterial,” said Moss. “More people use the Kosciuszko than the Golden Gate. It’s a hugely important link for all the cargo that comes from Staten Island up the Gowanus Expressway.”

Historian Kenneth T. Jackson, who recently retired from decades of teaching New York City history at Columbia University, agreed that Cuomo made significant strides in building infrastructure throughout the five boroughs. However, he disagreed with Moss on how Cuomo compared to the state’s most storied governors.

“I do not think he’ll ever rise to the top three governors in New York history,” said Jackson, who ranked Al Smith, Franklin Delano Roosevelt and Herbert Lehman among the governors who were the most prolific builders. “The Erie Canal [built by DeWitt Clinton] is one of the most important public works projects in American history.”

Other transit projects finished under Cuomo’s watch include two that long predated his tenure: Moynihan Train Hall and the Second Avenue Subway. The subway line had been in the works since 1951, as Moss noted. But the three-station extension of the Q line to 96th Street on the Upper East Side cost a whopping $4.6 billion for only 1.5 miles of new tunnel and stations. The New York Times found that overstaffing — particularly on the tunnel-boring portions of the project — along with high design and engineering costs were to blame for how the extension became “the most expensive mile of subway track on earth.”

Regardless of the underlying costs, Cuomo took great pains to remind New Yorkers of everything that he’d accomplished, in particular the building, during an address on his last day in office Monday.

“We are rebuilding our upstate airports. A new LaGuardia Airport. A new JFK Airport. A new Penn Station to end the hellacious conditions of Penn Station. More affordable housing than ever before. These projects are underway and essential to complete quickly and effectively, because they are literally building the future. We cannot go back to the old days, when government talked and debated, and issued a lot of press releases about what they were doing. But they never made a difference in people’s lives, they never improved, and they never built.”

Even some of the governor’s critics acknowledge his construction accomplishments. Jeff Gural, chairman of GFP Real Estate, noted that Cuomo has “accomplished a lot on infrastructure, probably more than any governor in my memory. He’s done a lot of good things, except that, you know, the atmosphere there is toxic and people who have worked on those projects with him tell me he was horrible to work with.”

Gural pointed out that the project manager who was responsible for overseeing the construction of Moynihan Train Hall, Michael Evans, killed himself last year as he struggled with delays, rising costs and last-minute requests from state officials intent on meeting Cuomo’s January 2021 deadline for the station’s completion.

“And one of the architects on that project said it was a nightmare and that Cuomo was impossible to work with,” said Gural. “His people don’t return phone calls. It’s just unpleasant. I think everyone is glad to see him go. I don’t know anyone who isn’t glad to see him face the music. His treatment of women was unacceptable, but his treatment of everyone was unacceptable.”

The developer added that he suspects the state will be paying for Cuomo’s infrastructure projects for decades to come. “He did accomplish a lot, but I’m not sure how they paid for them,” said Gural. “I think at the end of the day, there are going to be a lot of bills to pay.”

Some of Cuomo’s proposals, too, could prove more blue-sky thinking than concrete. His plan for a 1.5-mile airtrain to LaGuardia, for instance, has garnered opposition from the very Port Authority of New York and New Jersey tasked with building it. Some staffers there would prefer a less-ambitious — and cheaper — dedicated bus lane, rather than the former governor’s $2.1 billion monorail. His multi-building Empire Station Complex plan in Manhattan’s West 30s might prove too grand, too. It hinges on office leases helping to pay for transportation improvements at Penn Station, in a post-COVID era now, when demand for office space might not run that high.

Still, Cuomo has his fans based on what he did finish.

Francis Greenburger, CEO of real estate investment firm Time Equities, praised the completion of Moynihan Train Hall and the rebuilding of LaGuardia Airport, the Tappan Zee Bridge, and the L train tunnel between Manhattan and Brooklyn. He also felt that Cuomo’s legacy of infrastructure projects wasn’t tarnished by the damaging allegations against him.

“I use that station [Moynihan], and it’s a lot more pleasant to go into than the old one,” said Greenburger. “I’m not going to feel any different about my experience walking into Moynihan Station or Laguardia Airport because of his political history. I don’t see that the two are connected.”

Moss, of NYU’s Rudin Center, also felt that rebuilding LaGuardia was a significant accomplishment. The 80-year-old East Elmhurst, Queens, airport handles the lion’s share of New York City’s domestic flights, but it has long had a bad reputation for being poorly configured and cramped. One of Cuomo’s big priorities as governor was building new Terminals B and C and updating the road network and runways at LaGuardia. Although portions of the new terminals have opened, the $8 billion project is still under construction.

“I’m a big fan of the fact that LaGuardia airport has now been completely modernized,” said Moss. “The airport had been neglected for 40 years, because the Port Authority had always put priority on Kennedy and Newark.”

Gural, however, believed that Cuomo’s projects were inseparable from his now-sullied reputation.

“His legacy is completely tarnished because of the fact that he made such a major effort to create his own legacy,” said the developer. “He was on TV every day. Those people worked seven days a week. They rarely missed a day. I watched him every day and thought he did a phenomenal job of keeping everyone posted. Everything was designed to make him look good at the end of the day. ‘I’ll be able to cut the ribbon at LaGuardia, cut the ribbon on this bridge, get on TV every day.’ It was all designed to enhance his image. And, behind the scenes, he created this toxic work environment.”