The project has been in the works for seven years, and undergone several iterations 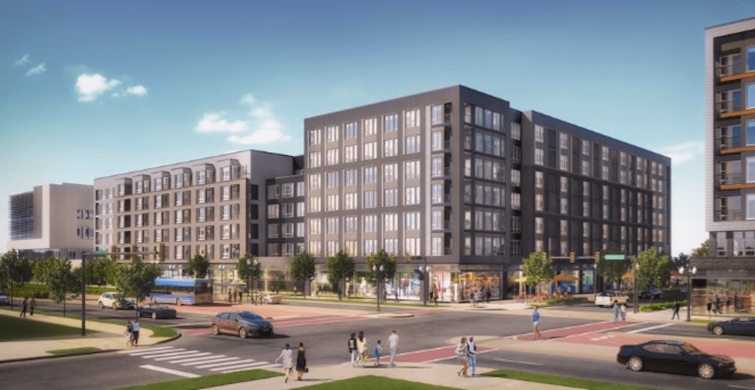 Stonebridge, the master developer behind Oakville Triangle, a planned mixed-use redevelopment in Alexandria, Va., has secured the necessary financing for the $300 million project.

With the financing secured, the project is ready to move forward, and demolition already began this week. When completed, Oakville Triangle will offer 577 apartments, a 93,000-square-foot Inova HealthPlex, 55,000 square feet of retail, and 84 townhomes built by Tri Pointe Homes in a four-block radius.

Doug Firstenberg, Stonebridge’s principal, told Commercial Observer the financing was complicated because it involved multiple pieces, and PCCP worked with the company to make all the moving parts work.

“The self-storage building was sold to a self-storage operator last week and that needed to happen first,” Firstenberg told CO. “Then, we had to put all the governing documents for the whole 13 acres in place, which had to be approved by the self-storage folks, the townhome developer, the Inova HealthPlex folks, and ourselves. Getting everyone to agree on the future vision of the project was complex.”

According to Firstenberg, it’s been a long process and he’s happy things are underway. Blackstone Group, owner of the property, brought in Stonebridge as the master developer seven years ago. At the time, the Virginia Tech Innovation Center was involved in the project, but it moved on when it required a larger space, moving to the North Potomac Yard area that JBG SMITH is now developing into National Landing.

“We’ve been working on this project for seven years now and it’s been through a couple of iterations,” Firstenberg said. “What this site is, is the connection between the phenomenal Del Ray neighborhood that everyone loves and Potomac Yards. This will make, in my mind, one great neighborhood. Right now, there’s very little retail, so 40,000 square feet of retail is going to make a big difference.”

Oakville Triangle is located just down the road from National Landing, the future home of Amazon HQ2 and Virginia Tech’s Innovation Campus, and is less than a mile from the Potomac Yard Metro station.

The health center and apartments are slated to deliver in the fourth quarter of 2023, while the rest of the project is scheduled for Q4 2024.

“When people drive by, they’re going to see some buildings coming down, but they won’t see a hole in the ground for a couple of months,” Firstenberg said.