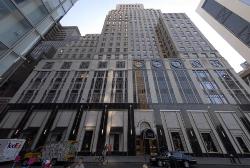 Parisian investment firm Eurazeo is doubling its Manhattan presence — and then some — with a 14,079-square-foot expansion at Paramount Group’s 745 Fifth Avenue, Commercial Observer has learned.

The lease moves the investor from a 6,200-square-foot hold on the 32nd floor to a terrace-included office on the 19th floor, according to tenant broker Transwestern Real Estate Services.

With a worldwide presence spanning Paris to New York, but also São Paulo to Singapore, Eurazeo will stay at 745 Fifth for at least another 10 years. The asking rent was between $105 and $130 per square foot.

In relocating within the building, Eurazeo will remain in a neighborhood primed for new offices. According to data from Transwestern, Manhattan’s Plaza District boasts approximately 69 million square feet of office space with a 15.7 percent availability rate as of last quarter.

“We conducted an extensive search for the firm and are very pleased to have the opportunity for an expansion within 745 Fifth,” Transwestern’s Chase Gordon, who represented the tenant alongside OPEN Impact Real Estate’s Lindsay Ornstein, said in a statement. “The larger office suite will allow Eurazeo greater flexibility in supporting its employees and servicing its clients.”

Paramount handled the deal in-house. A spokesperson did not immediately respond to a request for comment.

The move is scheduled for the first quarter of next year.