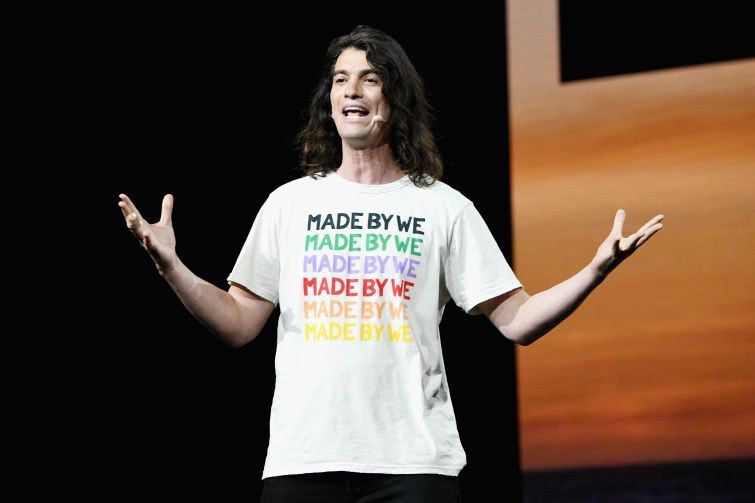 One thing you have to give Adam Neumann: The guy knows how to look after himself.

Back in May, Commercial Observer reported that Neumann’s golden parachute from WeWork got a tad more shine when he was able to finagle an enhanced stock award of $245 million — something other early investors were unable to get.

The story was originally broken by Wall Street Journal reporters Maureen Farrell and (CO alum) Eliot Brown, both of whom have a new book out, called “The Cult of We: WeWork, Adam Neumann and the Great Startup Delusion”.

CO got its hands on an early copy and, it turns out, we had no idea just how well Neumann looked after himself.

According to the book, Neumann had an 83 percent interest in We Holdings LLC, which sold off half a billion dollars’ worth of stock during the early funding rounds.

​​“Most of that had taken place when SoftBank had bought out the shares of some existing investors,” according to Brown and Farrell. “But it also included $130 million in sales that were tailor-made just for [Neumann] as part of earlier financing rounds. It’s not known exactly how much Neumann pocketed versus [co-founder Miguel] McKelvey and other small investors in the entity, but the bulk went to Neumann.”

All in all, Neumann reportedly pulled out $2.1 billion from the company as it went around the world burning up cash.

Of course, it could always be worse. It’s not like Neumann got the handcuffs slapped on him and was brought to jail like some real estate moguls we know.

We’re talking, of course, about Colony Capital founder (and friend of former President Donald Trump) Thomas Barrack, who was arrested in Los Angeles on Tuesday morning for illegally lobbying Trump on behalf of the United Arab Emirates. Barrack even got the “Late Night” treatment.

Nor is Neumann being investigated by Congress for supposedly overly aggressive evictions, which is precisely what Ventron Management, Invitation Homes, Pretium Partners and the Siegel Group are facing. A House subcommittee led by James Clyburn has said that the four corporate entities have initiated some 5,000 evictions over the course of the pandemic, despite the federal moratorium.

Shuffle up and deal

We’ll give Adam Neumann credit for one thing: He was correct in his belief that the future of real estate lay in flexible space. To wit, Alo Yoga took 73,000 square feet of space in an enterprise deal with WeWork at 9830 Wilshire Boulevard in Beverly Hills.

And others have been proving the value of the flex model. The OG of coworking, Regus, nabbed 28,341 square feet at 14 Penn Plaza. And while co-living is not the same as coworking, in Washington, D.C., Common took over a former WeLive (WeWork’s co-living brand.)

And, while there is unsettling worry sweeping across the country about the fact that a huge swath of Americans refuse to get vaccinated, putting vaccinated people at risk and throwing the bright economic future into some doubt, plenty of folks in real estate remain sunny.

SL Green, for one, said in their earnings call that they still expected a post-Labor Day return to the office. (Speaking of SL Green, they also managed to finally unload a 49 percent stake in the Daily News Building, which was the subject of a failed sale and lawsuit with Jacob Chetrit last year.)

And, after more than 18 months of misery in the hospitality market, last week New York City saw the highest demand for hotel rooms since the crisis started. (Andrew Farkas is another figure who sees the light at the end of the hospitality tunnel. He and several partners plunked down $185 million for the Lexington Hotel.)

Plus, many high-profile landlords have been investing in their buildings’ amenities big time. They probably wouldn’t have made these bets if they didn’t believe they’d see a return.

And there have been leases happening, like a 40,000-square-foot, indoor go-kart facility that Skip Barber Racing School signed for at the American Dream mall. In Los Angeles, the Agency for the Performing Arts (APA), which reps stars like Mary J. Blige, Jeff Bridges and 50 Cent, took two floors at Atria West near Century City. In the D.C. area, Iron Bow Technologies nabbed a 35,639-square-foot lease at Rockpoint and Brandywine Realty Trust’s 2121 Cooperative Way in Herndon, Va.

There were some significant purchases, too. Vornado grabbed an ownership stake in One Park Avenue in a deal that valued the building at $875 million. Canadian investment firm, Frankforter Group, decided it wanted to get in on the South Florida action and plunked down $43 million for Avery Pompano Beach, a new 144-unit multifamily complex.

The buying was not limited to specific properties, either. Equity Commonwealth bested Starwood Capital Group in their bid to take over industrial real estate owner Monmouth Real Estate Investment Corporation. (Starwood was not happy about this: “This latest decision of the Monmouth board to recommend the EQC stock offer is highly disappointing and we firmly believe it is not in the best interests of all of Monmouth’s shareholders,” Starwood said in a press release.)

The one actor who always seems like they have a tapeworm for real estate, however, we didn’t hear from. That’s Blackstone, the largest private landlord in the world. We guess they needed a break. But, now that there’s some time to be reflective, you can take this Sunday to read about how they became the biggest.

Or, for something a little more personal

Have you ever been sitting quietly in your office on a Friday, heard the phone ring, picked it up and heard your assistant say that Steve Jobs was waiting on the line for you?

That means you are in the same high-profile ship as Dan Shannon of MdeAS Architects. Shannon was designing the Apple Store in front of the GM Building, one of 100 or so projects he’s done in New York, when the tech guru called him personally about the design.

“This can’t be good,” said an overly pessimistic Shannon to himself …

Shannon is the favored architect of luminaries of real estate, such as Harry Macklowe and Steven Roth (“We go back to Dan again and again because he’s the best,” said Roth.) Shannon’s story is a good one to look over after Blackstone.