“I was in my office on a Friday afternoon. I get a call from my receptionist. ‘Dan, it’s Steve Jobs.’ I'm like, ‘This can't be good.’” — Dan Shannon 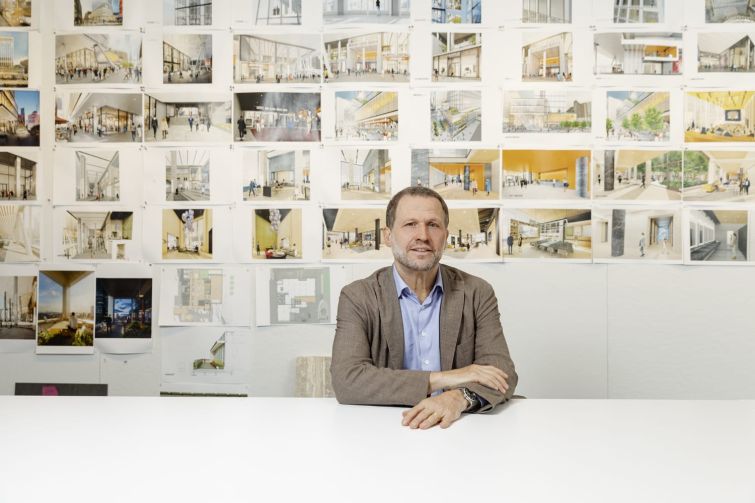 When Dan Shannon was around nine years old, his father, a corporate psychologist at General Motors, came home from work one day and said to him, “I’ve given this some thought, and I think you should start thinking about architecture.”

While that might seem like a lot to place on a nine-year-old, Shannon’s father was on the mark.

“I was always a drawer/builder,” Shannon, managing partner at MdeAS Architects, told Commercial Observer from an upper floor at 410 10th Avenue, one of his latest redevelopment projects.

Asked what he was building at that young age, he replied, “Mostly things I could blow up.”

“There were Legos, Lincoln Logs, that stuff,” said Shannon, 60, who was born in Flint, Mich., and grew up mostly in Louisville, Ky. “It was just constant. Then, my older brother and I would use a lot of fireworks on things.”

While the explosives have been retired, Shannon’s love of drawing and building never abated. Since attending the University of Notre Dame and Columbia University for his undergraduate and graduate degrees in architecture, respectively, Shannon — who lives on Sutton Place with his wife of 28 years, Lillian Jagendorf — has worked on the construction of more than 50 million square feet, including the restoration of the GM Building and the construction of the world-famous Apple Store within its plaza; the redevelopments of 1100 Avenue of the Americas, 1221 Avenue of the Americas, and 575 Fifth Avenue; and the current redevelopments of One Penn Plaza, Two Penn Plaza, and 410 10th Avenue.

For the 569,000-square-foot 410 10th Avenue — the former Master Printers Building that was once the largest concrete pour in New York City — the upgrade will ultimately include a modernized lobby, new facades and retail, high ceilings and open floor plans, larger windows, and a coffee bar and a roof terrace. The building is 100 percent leased to two clients, Amazon and First Republic Bank.

“The plan was to redevelop the building [so] that it maintained its character, but have it feed off the energy from Hudson Yards,” Shannon said. “The cool thing about these buildings is that they had all the elevators they needed, but they were defunct. They had big freight elevators and a six-pack of normal passenger elevators. So, we put both of those into play, and we moved the original lobby from 34th Street to 33rd Street, because 33rd Street is the promenade from the Penn District to here. It’s just a rush of people coming from the transportation center.”

The other major redevelopments occupying Shannon’s time these days is his work on One and Two Penn Plaza for Vornado Realty Trust.

“One Penn Plaza is nearly complete,” Shannon said. “Because of the area — with homelessness and drug use and so on — it became a very defensive building at the base. It was trying to keep people out, and there were barriers to getting into the building. So, Vornado’s direction to us was to completely transform the first two floors of that building, all of the plazas around it, and the whole way the public and the tenants of that building relate to the street.”

“The building was planned poorly,” Shannon said. “Entries to the building, MSG, and Penn Station were right there in the middle of 32nd Street, which meant that the office building was subservient to the thousands of people who need to get into the train station or Madison Square Garden. So, we had to replan the building, and find a way to add area to it without disrupting the train station. Because you cannot stop the train.”

The Two Penn redevelopment finds MdeAS placing an addition onto the front of the building two blocks (or 450 feet) long, and 50 feet above street level. The new office floors will have 25-foot-high ceilings; a 250-person auditorium; and new elevators, escalators, terraces, and rooftop space.

“Two Penn is set back around 70 feet from the street,” Shannon said. “This new building will be lifted up so we maintain all the public space [on Seventh Avenue]. Because, if you took that away, where would people go?”

Vornado Chairman and CEO Steven Roth said that Shannon has just the dependability and track record that the company needs for a project of this magnitude.

“Over the past two decades, Dan has done many important projects for Vornado ranging from lobby renovations to full building redevelopments to, now, his superb work on the complete transformation of the 1.8 million-square-foot PENN 2 currently underway,” Roth said in a statement to Commercial Observer. “Dan is very seasoned, experienced, talented, and super creative, and his energy is infectious. We go back to Dan again and again because he’s the best.”

Shannon initially came to New York in 1983. After brief stops at Kohn Pedersen Fox Associates and Welton Becket (now Ellerbe Becket), he landed at Skidmore, Owings & Merrill (SOM) in 1986, setting the course for his career.

He worked in the design department on projects, including the expansion of Dulles Airport, and an ill-fated redevelopment of the Allied/Federated department store chain.

“A Canadian developer bought all of their stores, and his concept was, have a building that is an old department store in cities — Cleveland, Cincinnati, Boston, all over — and put a tower on top of it,” Shannon said. “I must’ve drawn 30 of those. How many got built? Zero. I think [the problem was] the burden of the debt from the purchase of the stores.”

The Dulles project, though, proved invaluable, as it brought him closer to Leon Moed, a partner at SOM and head of its production department, who became a mentor.

“Leon was a mentor by trial,” Shannon said. “If you weren’t prepared when Leon asked you a question, if you tried to fake it, he knew within a second that it was fake, and he’d give you a chance. He’d say, ‘You can continue down this route of not being prepared, or come back for the next meeting prepared to have this conversation.’ If you came back the second time unprepared, God help you. He was an amazing mentor that way.”

From the start, Moed de Armas provided a wealth of educational opportunities for Shannon, including through such projects as five new floors for Crédit Agricole at 1301 Avenue of the Americas. Shannon was in charge of the construction. There was one major issue, though.

“What did I know about construction? Nothing,” Shannon recalled. “I was able, with Leon, to figure out how to lead the team to do the drawings. But, I showed up the first day at the construction meeting, and within the first two minutes, the guy in charge of the site recognized my knowledge of this world. He came up to me afterward and said, ‘Sit next to me in these meetings. When you have questions, you ask me. We’ll get through this together.’ So, for the next couple of years, I relied on this guy, Joe Kreppein, who worked for the construction company, to give me an education on what happens in the field and how this stuff gets built.”

Shannon also benefited from the wisdom of his first client, developer Harry Macklowe. After successfully shepherding a Macklowe office move, the two have worked together on roughly 35 major projects since 1995.

“He was a graduate school on understanding how a client saw things, and the relationship with the architect,” Shannon said. “We traveled the world together doing these projects. He sketched next to me, and I would interpret that, develop it, and bring it back to him.”

“We both appreciate Miesian design, and we’re both students and admirers of the Bauhaus. Our understanding of classic architecture is very compatible,” Macklowe said. “We bring out the best in each other, and our projects have always achieved a very high level of design proficiency. It’s a very close relationship, and a positive one that’s resulted in the creation of some beautiful spaces, beautiful projects, and beautiful buildings.”

The pair’s most recognizable project was the initially controversial Apple Store cube at the GM Building, which also found them working closely with Apple founder Steve Jobs.

“It was a two-year intensive collaboration, and Steve was just as involved as Harry,” Shannon said. “[Working with] those two together was a once-in-a-lifetime opportunity.”

As one might expect, Shannon says that Jobs always had a clear vision for the project.

“Steve knew exactly what he wanted, and he was incredibly generous with his time,” Shannon said. “I was in my office on a Friday afternoon. I get a call from my receptionist. ‘Dan, it’s Steve Jobs.’ I’m like, ‘This can’t be good.’ So, I get on the phone, and Steve says, ‘Dan, what we’re doing together is going to make a huge difference. It’s going to move the needle on how retailing is done and how our company is perceived as a retailer.’ And then he said, ‘But we can do better, right?’ And I said, ‘Steve, I hear you. Give me a little bit of time. I’ll send you something.’ I immediately call Harry. We sketch three schemes. I hand-sketched them. We emailed them to Steve, and within five minutes, he circled the one he liked and said, ‘That’s great.’ He didn’t like turns. It was a straight line of development for everything.”

Major projects like the Apple Store are one thing. There’s also the sheer quantity of Shannon’s work, with more than 100 buildings in New York City over the past decade alone. This is because redevelopment is a major aspect of his business.

“It takes a long time to assemble, design, and build a site. The fastest you can do that in is, like, five years. But it takes two years to do a redevelopment,” Shannon said. “For 410 10th Avenue, from my first meeting with SL Green until now was two years.”

Shannon has worked on new development projects, including 510 Madison Avenue and the 1.2 million-square-foot commercial building The JACX in Long Island City, Queens. But, more of his work these days comes via projects like his lobby renovations at 1221 Avenue of the Americas. Of course, he points out, redevelopment projects still require significant investment and manpower, whatever the relative speed.

Shannon also prefers redevelopments because of the milder impact they have on the environment.

“Let’s say we’ve got a 500,000-square-foot building that was probably built in the 1970s,” Shannon said. “It’s run past its life expectancy, not only for its exterior wall, but its mechanical and electrical systems, and it also no longer serves its tenancy — it doesn’t have outdoor space, it has bad windows, etc. There was a substantial amount of energy that went into putting that building there that’s termed ’embedded energy.’ All of that work that went into creating that building still exists in that building.

As he juggles project after project, Shannon relishes the opportunity to continue impacting the city he loves.