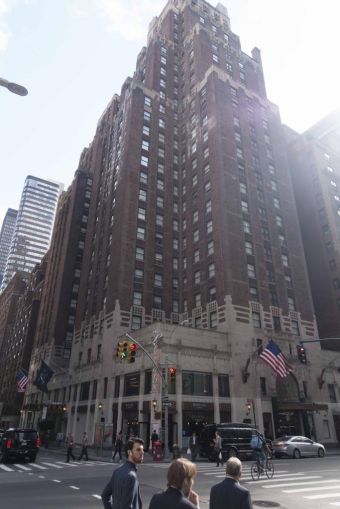 New York’s hospitality scene may be staring down a “depression,” but Andrew Farkas’ Island Capital Group recently made a statement to the contrary.

The New York real estate tycoon’s global investment firm — in a joint venture with MCR and Three Wall Capital — bought the historic Lexington Hotel at 511 Lexington Avenue in Midtown East for $185 million earlier this month, or about $255,000 per key, a little over half the cost of what the seller, DiamondRock Hospitality Company, paid for it in 2011 — $333.7 million.

All told, Island Capital and its partners were able to scoop up a well-known, Marriott International-branded hotel — a staple of a hospitality hotspot along Lexington Avenue — for 55 cents on the dollar in preparation for what they believe will be a robust comeback.

“We’ve seen a lot of stuff, but no one times anything perfectly,” Farkas told Commercial Observer. “No one hits the absolute top, and hopefully we won’t hit the absolute bottom. We were very well within the envelope of opportunistic investing with the price we paid, the time at which we paid it, [and] the position this asset enjoys in the market.”

DiamondRock, though, saw the disposition as a sound way to dial back its exposure to New York.

“We are pleased to announce the closing of this transaction, which right-sizes our portfolio’s exposure to New York City,” DiamondRock President and CEO Mark Brugger said in a statement earlier this month as part of its announcement of the sale.

After surveying a number of opportunities across the city, Island Capital identified the Lexington Hotel as the first investment that would come out of its new, $350 million fund targeting “COVID-19-generated, distressed opportunities” — a war chest that the company compiled in a short period of time during the pandemic to target a variety of high-profile assets in New York that have been negatively impacted by the pandemic, according to Farkas, who is the founder, chairman and CEO of Island Capital. About 90 percent of the capital raised for the fund has yet to be deployed.

The company didn’t make its first investment out of that fund for a year, while it examined a host of potential opportunities. What made The Lexington Hotel trade compelling to Farkas’ firm was that DiamondRock had pumped a significant amount of time and money into renovating the asset prior to the pandemic, and also because “the inventory in the market has shrunk significantly.”

“There are new soft furnishings, and the rooms and common spaces have all been spruced up, so it was a plug-and-play opportunity,” he said, adding that “in that particular corridor in the city, so close to The Waldorf [Astoria Hotel], about 3,000 rooms have permanently left the inventory. That’s not a small amount of rooms.” Farkas highlighted the closings of the Omni Berkshire Place Hotel, The Roosevelt Hotel, and The Maxwell Hotel as examples of losses to key hospitality products in the area that created a small void.

New York’s likely new rules aimed at slowing hotel development also means that existing inventory “has become materially more valuable, particularly given that operationally and tactically, the city is dealing with COVID in a different way,” Farkas said. “It’s trying to get back to normal, and that means tourism, too. And businesses are having meetings and events.”

Between 2007 and 2020, more than 54,000 hotel rooms were added to New York’s inventory, a 73 percent increase from prior years, according to information from the Department of City Planning. Now, the city wants to tamp down its hotel inventory, despite projections showing that the hotel sector’s rebound will pick up steam next year.

The 725-key Lexington Hotel was built in 1929, and is nestled on the corner of Lexington Avenue and East 48th Street. It has been closed since March 2020, but it is poised to reopen on Aug. 1. MCR will manage the asset, which will operate under the flag of Marriott’s Autograph Collection.

Over the years, the halls of the iconic, landmarked hotel have been frequented by a variety of celebrities and sports and entertainment icons, including the likes of Ella Fitzgerald and New York Yankees legend Joe DiMaggio, who lived in a suite with Marylin Monroe for a brief period when the pair were married in the early 1950s. It has also hosted illustrious night clubs, like the Hawaiian Room and Chateau Madrid.

While the pandemic has not been kind to the majority of New York’s most-storied hotels, the pressure on the sector is gradually fading as the city slowly rebounds. Hotels have been reopening for the summer to help support the return of the city’s sports and entertainment attractions.

In April, CBRE forecasted that New York City hotels wouldn’t fully recover until 2025. And, earlier this month, the American Hotel and Lodging Association (AHLA) wrote in a mid-year report that New York’s hotel scene was one of around two dozen U.S. hotel markets currently in a “depression.”

The pandemic has wiped out about a third of New York’s hotel room inventory, while its revenue per available room figure in May registered just $95, a 62 percent decline from May 2019, per the AHLA.

Still, New York, historically, has been one of the most heavily trafficked tourist destinations in the country, and Farkas sees the light at the end of the tunnel.

“The [Lexington Hotel] has been bought out already for events like the U.S. Open,” Farkas said, referencing the annual tennis major that is played from late August to mid-September and has been held at the USTA Billie Jean King National Tennis Center in Queens since the late 1970s. “You’re proximate to all the places people want to go, and you’re in the Midtown East corridor for offices.” Island Capital also expects that business travel will start to pick up after Labor Day as more and more companies start to bring their workforces back to the office.

As the city looks forward to a potential hospitality rebound in 2022 and beyond, the broader story for hotels is encouraging. Hotel employment, room revenues, and average annual hotel occupancy in the U.S. is expected to creep back up more significantly toward pre-pandemic levels in 2022, according to an AHLA report this month that cited data from Oxford Economics.

“We are proud to acquire the Lexington Hotel and we are excited about the reopening of the property as we emerge from the pandemic,” Farkas said. “We are confident that New York City will bounce back from what has been a very challenging time in [its] history… we are well positioned to capitalize on the return of [its] booming hospitality industry.”

This story has been updated to show that Island’s COVID-19 distressed fund closed at $350 million, rather than $250 million.