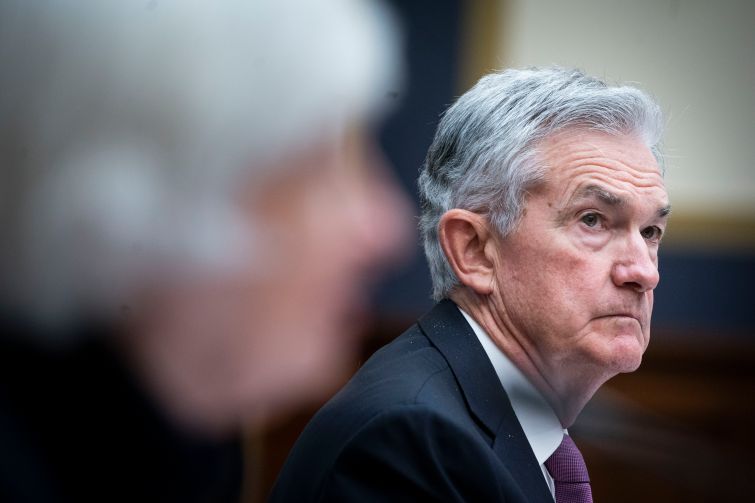 It finally happened. After years of talking about it, thinking about it, making incremental moves toward it and quietly dreading it, the Fed bit the bullet and upped its benchmark interest rate by a whopping 75 basis points. (It was the largest rate hike in 28 years.)

And Fed chairman Jerome Powell was pretty explicit that this wasn’t the end of the Fed’s plans to curb inflation; the rate is expected to rise to 3.4 percent by the end of the year.

Given that interest rates had been so low for so long, and given that employment and inflation are both at record highs, the move was pretty much inevitable, even if it hurts to admit it.

Still, nobody likes it when the proverbial punch bowl is removed. And when taken in tandem with the uncertainty still in the air about return to office, it was not a great week for some of the major REITs on the big board. On Thursday Vornado Realty Trust stock dropped 5.4 percent. But REIT stocks were dropping well before the rate hike. Even some of the safer real estate bets, like industrial behemoth Prologis, have shown steep declines since its stock high in April.

However, Prologis, certainly seems to be putting its money where its mouth is in terms of their belief in industrial real estate.

The REIT plunked down $26 billion to buy the 126 million-square-foot empire of Duke Realty in an all-stock deal. (So Duke must also have a considerable amount of faith in Prologis’ stock, too.)

This was a happy ending to many months of courtship that looked doomed to outsiders. Back in November Duke rejected an offer from Prologis that would have bought the REIT for what would have been $24 billion, and shot down another (“virtually unchanged”) offer in May.

To be very clear: Stock market ups and downs aside, most CRE professionals remain in the thrall of industrial, logistic and data center real estate.

Just this week CO revealed that a joint venture between Bay Street Capital and Drake Real Estate Partners plans to buy up around $100 million worth of industrial outdoor storage by the end of the year.

In the D.C. area, NTT, an IT infrastructure and services company, spent $257.4 million buying 103 acres of land in Gainesville, Va., from Lerner Enterprises, to build a 2 million-square-foot data center and campus. That works out to more than double what Microsoft paid last year to develop its own Virginia-based campus.

And in the Hunts Point section of the Bronx, ​​Turnbridge Equities is building one of the largest industrial projects in New York City history — a 1.3 million-square-foot logistics center at 980 East 149th Street.

It remains one of the very safest asset classes. The only asset we could think of that’s as safe is life sciences, which currently is looking underdeveloped.

“There are millions of square feet of demand beyond the current supply, vacancy rates are at an all-time low, and hiring continues to surge,” said Matt Gardner, Americas life sciences leader at CBRE, which just put out a new report on life sciences. “If you just look at [the number of current clinical trials], the number of products in the pipeline are larger or wider than the industry has ever had before. … So this rung that the industry has been on for the past five years has resulted in a tremendous uptick in new products and development.”

And the money has been pouring in. Los Angeles has seen a 566 percent uptick in venture capital funding for life sciences in the last five years. (Which is even better than the 345 percent increase nationwide during the same period.)

Other cities are not intending to be left out. “We’re in the midst of a billion-dollar investment plan around biotech,” Andrew Kimball, New York City Economic Development Corporation president and CEO, told CO earlier this month. “We are turning Kips Bay into something closer to Kendall Square in Cambridge, Mass. We’re going to have a hub-and-spoke strategy that really touches communities across the city from the West Side of Manhattan, to Harlem, to the North Bronx and Morris Park, to Long Island City and Queens and to the South Brooklyn waterfront in terms of biotech.”

It finally happened. After years of talking about it, thinking about it, making incremental moves toward it, and quietly dreading it, 421a officially expired on June 15. And as of now there’s no replacement.

However, as 421a expired, Mayor Eric Adams announced his administration would allocate an extra $5 billion for new affordable housing and cut red tape for people in need of housing (or seeking to build housing) and explained his plans in a 94-page report called “Housing Our Neighbors.”

Unfortunately, despite all those pages, details were scant about where the new housing would go, or how many people would be affected.

“It’s often asked, ‘How many units are you going to build?’ ” the mayor said during his press conference unveiling his plan. “If that is one of the on-topic questions you’re going to ask me, don’t — because I’m not answering that.”

Housing isn’t letting up in Miami

You can call the above line one of the least surprising lines we’ve had in this newsletter in a while. Yeah, yeah, yeah … Miami’s on fire.

JBS Capital Group plunked down some $150 million for the 11-acre, 420-unit development The Pacific Point Apartments in Broward County from Frankforter Group.

Cymbal DLT scored a $102.5 million loan from developer Stephen Ross to construct an 11-building, 14-acre multifamily complex that will consist of 341 units at 20755 NW 17th Avenue in the city of Miami Gardens.

JDS Development Group got a $86 million acquisition and construction loan for its massive 64-story, mixed-use project 1 Southside Park in Miami’s Brickell district, which is set to include 1,175 rental apartments, 190,000 square feet of offices and 10,000 square feet of retail.

CMC Group and Morabito Properties secured $64.5 million from Bank OZK for its eight-story luxury condominium, Onda Residences, at 1135 103rd Street in Bay Harbor Islands, which it is currently building.

And even some nonresidential real estate got in on the action. Summit Hotel Properties purchased a majority stake in a 264-room dual-branded AC Hotel by Marriott & Element Miami Brickell, at 115 SW 8th Street, just west of the Brickell City Centre complex for $89 million.

Back to the Big Picture

Inflation, the stock market, and pending recession were all up for discussion at the CRE Finance Council’s annual New York conference last week at the New York Marriott Marquis, and feelings sounded mixed from where we sat.

There were certainly some positive players. “We have been fairly disciplined as an industry for the last decade or so in terms of leverage,” said Wells Fargo’s Kara McShane in her talk.

Others were less sanguine. “Inflation is definitely impacting commercial real estate and it will impact cap rates,” said Marshall Glick of AllianceBernstein, “but I don’t think it’s really like a one size fits all as each property type has its own dynamics.” (Hey, Glick — we thought inflation wasn’t a problem for commercial real estate. At least that was what Cushman & Wakefield told us.)

And there’s a “who knows” about the regulatory landscape going into 2023 with congressional control expected to swap after the midterm elections.

Of course, the biggest “who knows” is return to office, which was the topic of a panel “Back to the Office: Workplace Trends and Benefits” featuring Taris Mullins of Loeb Leadership, Annemarie DiCola of Trepp, Sarena Ehrlich of CBRE and Michelle Hull of SitusAMC.

“We certainly see an upcoming spate of office lease expirations coming,” said DiCola. “We see over $320 billion worth of mortgages on office buildings that will be maturing between this year and next year. It’s definitely a very big turning point for a lot of companies to truly evaluate the question of what is the right use of their space.” (Well, that should make just about everybody nervous. Moody’s, however, has a far sunnier take on the current state of office.)

Keenan Thompson of “Saturday Night Live” was interviewed by Kroll’s global head of structured finance ratings Eric Thompson (no relation) about the importance of diversity in CRE.

And, while we were on the ground at CREFC, we ran into old friends Sam Chandan, Mark Fogel and Lisa Pendergast and got their takes on the state of the market.

For those of you who thought that CO’s power season (Power 100, Power Finance, etc.) had drawn to a close, well, you hadn’t considered the nation’s capital.

Yes, this week CO unveiled its list of the top real estate players of Washington, D.C.

Makes for the perfect way to turn around a somewhat cruddy week.