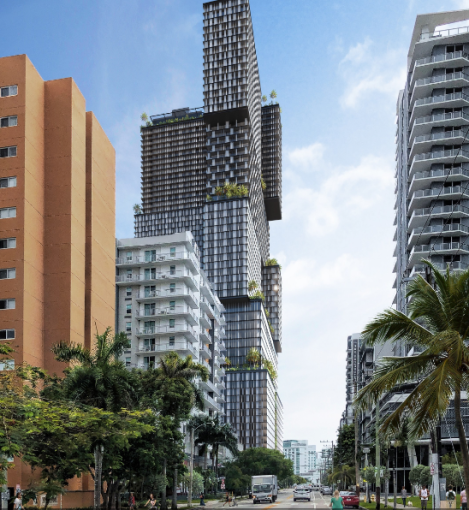 The 64-story development will include 1,175 rental apartments, 190,000 square feet for offices, 10,000 square feet for retail as well as a 1,400-car parking garage. The nation’s first Treehouse Hotel, a Starwood Capital Group-owned brand, is set to open within the property with 200 rooms.

The project will encompass a full city block between Southwest 11th and 12th streets, just west of the Metrorail line. JDS, led by Michael Stern, paid $23 million for the site in 2020, according to property records. The City of Miami owns the rest of the block.

After JDS bought the property, the city struck a deal with the developer to house a new $8 million fire station inside the tower and to invest $5 million into the community, including $3 million to improve the adjacent Southside Park, which was declared a brownfield in 2014, The Real Deal reported.

JDS replaced the existing land acquisition loan of $43 million from Maxim Capital Group with a bridge construction loan with an additional $43 million at a lower interest rate, bringing the total to $86 million. Foundation work is now close to completion.

JDS is the latest developer to launch a massive project in an underdeveloped section of Brickell along the west side of Metrorail rack. Four blocks north of JDS’ development, Property Market Groups bought a 1.15-acre site for $58 million last week with plans to build 570 rental apartments.

Across the neighborhood, JDS is developing a residential skyscraper with hospitality powerhouse Major Food Group, the company behind celebrity hotspot Carbone.

In New York, JDS is known for building so-called supertall residential towers, such as 111 West 57th Street and The Brooklyn Tower at 9 DeKalb Avenue.

Julia Echikson can be reached juliaechikson@commercialobserver.com.